You Are Here: Home → 2009 → August → 27 → As Wyeth-Pfizer Merger Looms, Workers in Philippines Fret Over Their Jobs

As Wyeth-Pfizer Merger Looms, Workers in Philippines Fret Over Their Jobs

“It is not a merger, it is an acquisition.”

“It is a marriage of two weaknesses.”

“Pfizer can’t develop their own drugs, so they buy up companies that can, then destroy them.”

MANILA — Since 2007, much had been said about the then still-rumored Pfizer-Wyeth mega-merger. Something “bold” had long been expected from industry giant Pfizer to develop new streams of profits once its profitable drugs come off patent in a few years. One of these likely “bold” moves is the merger or takeover of rival companies. Pfizer had gained a reputation for buying out rival pharmaceutical companies such as Warner-Lambert and Pharmacia, and then implementing brutal staff cutback to cut costs and increase profits. This has allowed the pharmaceutical giant to maintain its top status in the industry.

As early as January this year, the sale of Wyeth to Pfizer neared consummation as both parties agreed at the price tag of $68 billion. But only the shareholders and Wall Street seemed happy with the immediate outlook. 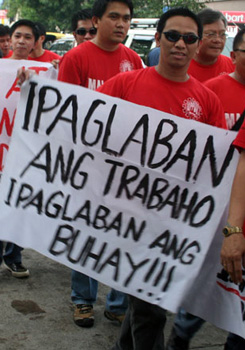 In many parts of the world, news of the merger struck fear among many employees. “All here are afraid with this merger, a lot of employees are finding new [jobs] because the merger will fire a lot of Wyeth employees,” went a comment posted on an Internet forum last February. “I am a Wyeth employee, too, and this merger scare all of us,” went another post. “I’m not finding a new job, but I’m still waiting to be fired.”

In the Philippines, two of the three unions covering the majority of the thousand-strong workforce of Wyeth production and sales have united to launch a series of mass actions starting this month. (See related story.) In their first picket last week, they complained that they were not even informed of developments, let alone consulted on what would become of them after the buyout.

“If we had not conducted a picket (last week), the management would not even talk to us about Wyeth being turned over to Pfizer on Sept. 15,” said Ronald Sarmiento, auditor of the 400-strong Wyeth Philippines Progressive Workers’ Union (WPPWU). 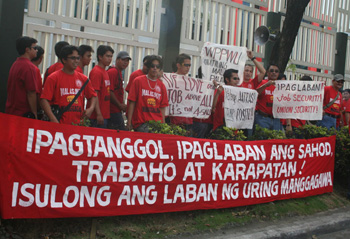 In a negotiation with the management last week, held as a result of the unions’ first picket-protest, the union learned that Sept. 15 would be “Day 1” of the mega-merger. What follows is dubbed as “Go Live,” which could result in retrenchment and union busting for thousands of both Pfizer and Wyeth employees worldwide.

The 30-day “Go Live” period starting from Sept. 16 would be a time for Pfizer to determine which of Wyeth’s and Pfizer’s production plants and offices worldwide would be closed down or retained.

In the process, maximizing synergy and profits would be Pfizer’s main goal. In a press conference, Pfizer CEO Jeffrey Kindler reportedly said the Wyeth merger is not about “a single product or cost-cutting,” as with past deals. Instead, “it’s about creating a broad, diversified portfolio.”

But in the same breath, Pfizer said it expects to achieve about $4 billion in “synergies” by 2012, from savings derived from reducing the combined workforce of the two companies by 15 percent, or some 20,000 jobs. Pfizer has reportedly started eliminating 8,000 jobs or 10 percent of its workforce. It is closing five of its 46 manufacturing plants.