The Manobos of Surigao del Sur may be back home for now, but they still face the threats of militarization – even as they also have to contend with the burden of rebuilding their ravaged homes, schools, and livelihoods.

MANILA — After spending almost three months in an evacuation center, Ernesto Hernandez returned to his home in Lagdek, San Isidro, Lianga in Surigao del Sur to find the words “C Coy the best” written on the wall of his house. Mobile phone numbers of people he had never heard of were written on other parts of the wall. At the veranda, there were several sandbags.

Lourdes Takmoy, also of Lagdek, returned to her house — also after living in an evacuation center for nearly three months — to find human feces in her kitchen.

On the wall of Bae Narding Merza’s house, located in another community also in Surigao del Sur, were written the following words: “Members of this household are active in the NPA (New People’s Army).”

In Simuwao, the school of the Tribal Filipino Program of Surigao del Sur (Trifpss) had the words “teachers of the NPA, communists” written on one of the blackboards. 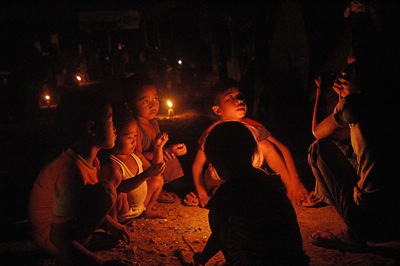 Lumad children on the night before their trip back home. View the slideshow (Photo by Kenneth Roland A. Guda / pinoyweekly.org)

In other communities the Lumads found that their rice pots, pails, plates, and utensils were missing. Many of the doors of their homes had been knocked down. Tilapia fingerlings were missing, possibly stolen, from at least one fishpond. Vegetables that were to be harvested soon had also been stolen, while other crops were rotting.

Such scenes, as described in a report by the Ecumenical Movement for Justice and Peace (EMJP), were what nearly 2,000 Lumads witnessed when they returned to their communities on Aug. 30 after spending three months in refugee centers.

These members of the Manobo tribe had fled from their communities in the towns of Lianga, San Agustin, Tago, and Carrascal in Surigao del Sur to escape militarization.

But apart from implementing these “development” projects, the soldiers – who belong to the Philippine Army’s 58th Infantry Brigade, led by Col. Benjamin Pedralvez – also conducted military operations, walking around with their high-powered firearms not only in the villages but also on school grounds.

According to Isaias Morales of Karapatan-Caraga, the Manobos suffered from frequent bombings of their communities. “There are many trees in their areas and it is perhaps only these that protected them from death,” Morales said in an interview with Bulatlat.

Not only that: the military also conscripted the members of these Manobo communities into the military’s Task Force Gantangan, and the only other option for those who would refuse was to “surrender” as “NPA guerrillas”. “This sows disunity among the Lumads,” said Nelson Mallari, spokesman of the Kalipunan ng mga Katutubong Mamamayan ng Pilipinas (Kamp or National Federation of Indigenous Peoples in the Philippines) and secretary-general of the Katribu Partylist.

Children were encouraged to steal and surrender the firearms of the “NPA” in exchange for cash.

The schools of Trifpss and the Alternative Learning Center for Agricultural and Livelihood Development (Alcadev), government-awarded institutions that provided educational opportunities typically unavailable to indigenous cultural communities, were vilified as “NPA schools” and disrupted in their operations. The communities maintained organic farms, and the forced evacuations caused many of their crops to rot. “These were proof of the Lumads’ resolve to achieve genuine progress through their own self-determination,” Mallari said.

The places used as evacuation centers – the Lianga Gymnasium and the Tandag Diocesan Pastoral Center – were crowded and the evacuees suffered from the lack of support from government agencies. Only through the efforts of their leaders were the members of these communities able to survive the harrowing conditions in the evacuation centers for almost three months.

Their community leaders brought their plight to the attention of government officials, nongovernment organizations, and people’s organizations at the local, national, and international levels. They would not go back to their communities, they said, unless the military pulled out.

Only after their plight caught the attention of the groups in Manila, as well as the Commission on Human Rights and the national media, did the military leave the area, but not after declaring that they would be back purportedly to continue implementing their “development” projects. In Carrascal, the soldiers did not even leave.

On Aug. 30, accompanied by 179 delegates to a National Solidarity Mission organized by Task Force Surigao, most of the 1,795 evacuees returned to their homes. But the presence of the military still looms over their communities.

The Manobos of Lianga, San Agustin, and Tago may be back home for now, but they still face the threats of militarization – even as they also have to contend with the burden of rebuilding their ravaged homes, schools, and livelihoods. (Bulatlat.com)