“Most martyrs of the Church who actively denounced the abuses of government officials and military forces received series of death threats and were tagged as communists or NPA supporters by military,” said Nardy Sabino, secretary-general of the Promotion of Church People’s Response. “The killing of Father Lucero is an attack on the Christian faith and humanity that aspire for freedom, genuine peace and justice.”

MANILA — Various groups view the murder of Catholic priest Father Cecilio Lucero as part of a pattern of extrajudicial killings in Eastern Visayas.

Lucero, parish priest of Catubig town, Northern Samar, was killed by some 30 armed men in Sitio Puente, Barangay Lahuyan, San Jose town. Police recovered 35 pieces of empty shells and one live ammunition for an Armalite rifle from the crime scene.

Lucero was a member of the Promotion of Church People’s Response (PCPR). He is also the chairman of the Committee on Human Rights and chairman of the Task Force Peace and Order of the Diocese of Catarman. The task force is an initiative of the diocese with multisectoral partnership.

In a statement posted at the website of the Catholic Bishops Conference of the Philippines (CBCP), Bishop Emmanuel Trance of Catarman condemned the murder and demanded that authorities “investigate and bring to swift and due justice” those behind the crime. 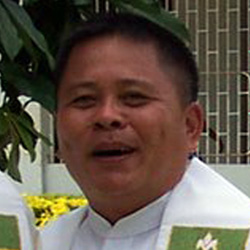 “As in other killings, I join everyone in asking government officials to get to the bottom of this extra judicial killing which has claimed the life of one of our priests,” he added.

The Ecumenical Bishops’ Forum (EBF), the fellowship of bishops in the Roman Catholic Church, Iglesia Filipina Independiente, United Church of Christ of the Philippines, the United Methodist Church, the Episcopal Church in the Philippines, supported Trance’s call for speedy resolution of Lucero’s murder.

“Like many martyrs from the church before him, Father Lucero was unflinching in his prophetic role as a man of the cloth,” the EBF said in a statement. “His family, friends and colleagues believe that this unwavering advocacy for human rights was the main reason why he was ambushed.” The statement was signed by its co-chairpersons Catholic Bishop Deogracias Iñiguez Jr. of the Diocese of Caloocan and Methodist Bishop Solito Toquero.

The National Clergy Discernment Group said the manner of killing of Lucero shows “the vicious nature and the loathsome impunity our present dispensation regard people with cause-oriented commitments and defenders of human rights.”

“The death that Fr. Lucero was meted out with is the example of how much evil has incarnated in our midst,” Fr. Jose Dizon, convenor of the group, said.

Trance, meanwhile, noted that since December last year, extrajudicial killings have been going on in the Diocese of Catarman, citing that the Social Action Center has documented 18 killings during the past six months.

“If they could do this to a priest, this incident will instill fear among ordinary people,” Trance said.