You Are Here: Home → 2009 → October → 18 → In Historic Gathering, Filipino Priests Vow to Be More Active in ‘Political Realm’

In Historic Gathering, Filipino Priests Vow to Be More Active in ‘Political Realm’

MANILA — It what appears to be a challenge to the assertions of conservative groups and the government that the Church should not be involved in politics and the “affairs of the state,” priests from all over the country — in a historic first — gathered to discern and discuss their role amid these turbulent times.

A growing number of Catholic priests in the Philippines are committing to be more active in the “political realm,” to be more vocal and to act more decisively against corruption, human-rights violations, electoral fraud, patronage politics and political dynasties. They have also committed to act on people’s issues such as land reform, mining, logging and other activities that degrade the environment and ultimately victimize the people.

In fact, as the priests happily found out during their unprecedented gathering in Makati City late last week, many members of the clergy have been actively grappling with these concerns in the course of doing their “prophetic mission.”

“Gone are the days when partisan politics is a taboo topic in the Church,” said the Reverend Carmelo Diola, a priest of the archdiocese of Cebu. 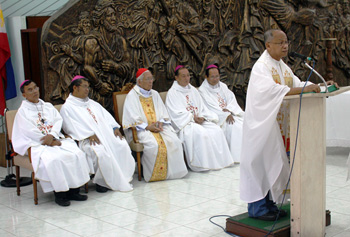 Priests and bishops gather in Makati City for a “national discernment.” (Photo by Kodao Productions / bulatlat.com)

In a historic three-day gathering of 250 priests, including 19 bishops, from all over the country, they shared how they have been striving to breathe life to the “prophetic character of priesthood participation in social transformation and politics,” as Monsignor Manuel Gabriel, a priest of the diocese of Parañaque and rector of Saint Andrew’s Cathedral, put it. Toward the end of their gathering, Monsignor Gabriel was formally chosen by the assembly as national convenor of their “discernment network.”

“Discernment” is how Catholic priests call the process where they face “social challenges,” reflect on their experiences “in the light of their prophetic mission and stewardship role” and deliberate on “appropriate areas of action and collaboration.”

Since February last year, in response to a pastoral letter of the Catholic Bishops’ Conference of the Philippines (CBCP) urging for the establishment of “circles of discernment” in various ecclesiastical levels, numerous activities of this type have been held across the country, paving the way to the their very first national assembly held from October 13 to 15 at the San Carlos Seminary in Guadalupe, Makati City.

“The mere fact that it happened is already historical,” said the Reverend Jose Dizon, a priest from the diocese of Imus, Cavite, one of the convenors and later formally chosen by the assembly of priests and bishops as the executive director of their national discernment network. Father Dizon noted the “significant number” and high level of enthusiasm of the participants.

Although the national assembly for discernment of priests was held with the full knowledge and encouragement of the CBCP, the assembly is “self-reliant and self-propelled.” The priests who attended paid for their own transport; they and the convenors solicited for the assembly’s needs; they made do with what were available as food and accommodation.

“It is heartening to see the participants’ discipline and drive for the success of the first national discernment activity,” Father Dizon told Bulatlat. Despite the participants’ tiredness – many came from places that had recently been flooded – they still attended and contributed much to the assembly’s “meaty discussion,” he said.

Often self-deprecating, the gathered priests found occasion to criticize and laugh at themselves and what they do. They congratulated themselves whenever they managed to speak briefly rather than lengthily, they praised the younger priests for reporting their part most pithily and with fire, and they noted that, thanks to their national assembly, they realized that you could actually make a priest go hungry without him complaining, or that you could make priests listen attentively to one another even during supposed siesta hours, or bear eviction from one place of accommodation to another in good humor.

The priests also poked fun at some of their own pastoral letters which, in having tried to be all-inclusive, had become unclear or “not really saying what they should be saying.” They mentioned the difficulty of condemning corruption and politics of patronage if in their own ranks they also have their own cases of corruption and patronage. They requested to do discernment activities and for the bishops to also conduct their own.