Through the stock distribution option such as the one in Hacienda Luisita, the essence of land reform has been distorted to benefit landowners, denying the farmers of actual land redistribution. 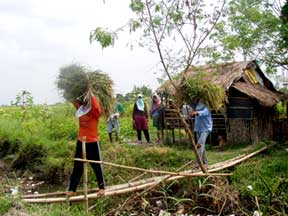 The massacre in Tarlac’s Hacienda Luisita five years ago—where seven farm workers were felled by government bullets and scores suffered injuries—is a tragic testament to the peasants’ continuing plight of landlessness and poverty.

Particularly in Luisita, peasants have for two decades been denied the essence of land reform—genuine land distribution. This, as the Cojuangcos persist in implementing the stock distribution option (SDO) despite justified calls for its revocation.

Just recently, Hacienda Luisita again figured in an alleged controversial deal. According to United Luisita Workers Union Chairperson Lito Bais, the national government purchased 83 hectares of Luisita for the construction of a portion of the Subic-Tarlac-Clark Expressway (SCTEX) for which farmworkers received anomalously varying amounts– from as high as P300 to only a few centavos each.

In 1957, to purchase the Central Azucarera de Tarlac (CAT) from Spanish-owned Compania General de Tabacos de Filipinas (Tabacalera), Jose Cojuanco Sr. was obliged to obtain the 6,474-hectare Hacienda Luisita, as well as seek loans. Subsequently the CAT and Hacienda Luisita were transferred to Cojuanco’s Tarlac Development Corporation (TADECO), an agricultural corporation. In line with government’s social justice program, these loans were guaranteed on the condition that the Cojuangcos will distribute the Hacienda land to small farmers.

The clan was also granted a P7-million loan in purchasing the Hacienda, on the condition that the latter will be subdivided among tenants. The case filed by the Marcos government in 1985 to compel the Cojuangcos to transfer Hacienda Luisita to the Ministry of Agrarian Reform for subdivision and sale to farmers was dismissed by the Court of Appeals in 1988 on the ground that Luisita would be covered by agrarian reform.

Fifty-two years have passed since the Cojuangcos acquired Hacienda Luisita at no cost except the promise to return the land to its rightful tillers. Yet, that promise remains unfulfilled. Under the presidency of Corazon Cojuangco-Aquino, youngest sister of Hacienda Luisita’s majority owner Jose “Peping” Cojuangco, RA 6657 or the Comprehensive Agrarian Reform Law (CARL) was enacted. Aquino made land reform her administration’s centerpiece program, and even vowed to subject Luisita to land reform “to serve as an example”.

However, both the CARL itself and Executive Order 229 signed by Aquino provided for the “transfer of shares of stocks, rather than land, to workers and other qualified beneficiaries… as the action is deemed compliance with the land distribution requirements of the Comprehensive Agrarian Reform Program (CARP)”. Subsequently, the TADECO created Hacienda Luisita Inc. (HLI) as a company specifically for this purpose.

After two rounds of referendums facilitated by then DAR Secretary Philip Juico and other Tarlac government officials in May 1989 and by former Agrarian Reform Secretary Miriam Defensor in October 1989, a Memorandum of Agreement (MOA) on the SDO was signed between TADECO, HLI and the farmers. Sentro Para sa Tunay na Repormang Agraryo (SENTRA) Executive Director and peasant lawyer Jobert Pahilga defines the SDO:

The SDO covers farmworkers who appear in the annual payroll including permanent and seasonal employees regularly or periodically employed by the TADECO. The farmworkers’ shares of stock are determined by the number of days of work or mandays, which is allocated by the HLI management.

In a position paper submitted to the Senate Agrarian Reform Committee in 1990, the University of the Philippines Law Center criticized the SDO as ‘unconstitutional’ because:

– it is essentially non-distributive
– it has allowed landlords to retain control over their property
– it has failed to improve the socioeconomic conditions of it beneficiaries.

Worse, studies reveal that in anticipation of the SDO, the Cojuangco clan created several agribusiness-related companies such as sugarcane production and milling, of which only the HLI dealt with agrarian reform. The Cojuangcos also declared only less than 5,000 hectares as land assets and reduced its value to only one-third of HLI’s total value. Meanwhile, the “more expensive portions” covering roads, residential, commercial areas and their peripheries were declared property of other Cojuangco corporations and were appraised up to more than 60% of the corporation’s value.

Farm workers have filed petitions and launched protests against the SDO which has, for 20 years now, only pushed them deeper in misery. Pahilga wrote that the farmworkers boycotted the September 2003 elections for farmworkers’ and supervisors’ representatives to the HLI board “as a protest to the SDO and because the four board seats were useless against seven management seats.” They have neither enjoyed their rights and privileges stipulated in the MOA nor have they received their due whether in HLI’s production sales or conversion proceeds. Several home lot awardees have also not received their individual titles.

The Cojuangcos have constantly pushed for the conversion of Luisita lands into non-agricultural ventures for profit– without due consultation with their ‘co-owners’, the farmworkers. These land-use conversions have reduced the hacienda’s agricultural lands to less than half its original size.