You Are Here: Home → 2009 → December → 4 → In Northern Mindanao, Tears Flow Over Human-Rights Abuses 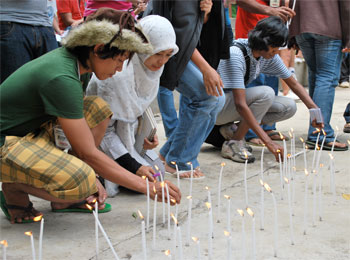 Some of the participants to the fact-finding mission pay tribute to victims. (Photo courtesy of Karapatan-Cagayan de Oro)

She denied allegations that her husband and their family are members of the Communist Party of the Philippines’s armed wing, the New People’s Army (NPA). Belayong claimed that her husband was executed under the suspicion that he was a member of the NPA.

“In our years here, we never joined any armed group,” Belayong said.

Belayong, who said she was beside her husband in his final moment, said her husband’s final words for her was, “Don’t stop struggling for our ancestral.”

Samuel Hangadon, a Lumad leader of the Higaonon tribe, told summit participants that he witnessed the assassination of Datu Mampaagi Belayong.

“I ran to his side to see if he was still alive,” said Hangadon in Visayan. He said he rushed to Belayong’s slumped body after heard gunshots.

Hangadon said he went into hiding after his son overheard talks that his father would be next.

“Pa, you should go away because they’re saying you are,” Hangadon’s son supposedly told him.

“I can no longer return home,” Hangadon added.

His family is now in a dilemma and is having a hard time coping with what had happened in their community.

“Because I’m no longer in our area, they can spread the lie that I am an NPA member,” said Hangadon, who has been kept safe by church people for a month now.

He said he could identify the members of the paramilitary group Task Force Gantangan because some of them, he said, were even his relatives.

“Some of them are my relatives, several are my nephews,” he said. “Up to now, they are harassing the civilians in our,” Hangadon said.

His family is currently starving, he said; his children have resorted to begging in the streets of neighboring Butuan City.

Maglungsod, himself a Mindanaoan, said he was aghast after hearing the victims’ testimonies. He added that first thing next week, he would file a House resolution condemning the ongoing militarization in Northern Mindanao and to request for a full blown legislative inquiry on the matter.

For the victims’ immediate needs, he said Anakpawis would request the Department of Health and Department of Social Welfare and Development for a medical and relief operations in the area.

“I will personally participate in the mission to make sure that help gets to those who need it,” Maglungsod said.

“I am a witness that the province of Bukidnon is now a military zone,” he added.

He recounted their ordeal when he went with the International Peace and Human Rights Mission (IPHRM)-Bukidnon Team that they were not allowed to enter the fact-finding mission area even with the go signal of Malaybalay Mayor Florencio Flores.

“After that, we sought the help of the office of Gov. Carlos Fortich but we were still prevented from entering the area,” said Maglungsod.

In an interview, Ocampo said the testimonies of the victims only reinforce the consistency and pattern of the military’s implementation of Oplan Bantay Laya.

“They are militarizing the area by establishing civilian armed groups under the pretext of counter-insurgency when the motive are the profits they could gain by controlling these resource-rich areas,” Ocampo said. (Bulatlat.com)