Among the other mining companies operating in Bukidnon are Nickeloadeon Mines, Ophiolite Mining, Nickeloreon Mining, and Orex Mindanao — all of which have been in agreement with Geograce Resources Philippines since Nov. 11, 2008, regarding the development and operation of their mining tenements.

Geograce’s board of directors is chaired by Renato V. Puno, brother of Interior Secretary Ronaldo Puno. Among its directors is former Environment Secretary Michael Defensor.

Geograce recently entered into a partnership with Brazil-based Companhia Vale do Rio Doce, the second-largest mining company in the world today.

In Agusan del Sur, the towns of La Paz and Talacogon are covered by Pacific Maunlad Mining Corporation’s application for mining exploration. 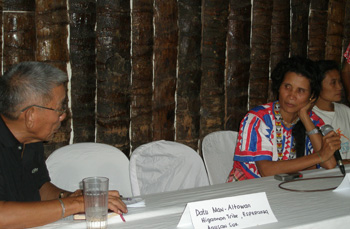 A journalist listens to the Lumad women tell their tale during a press conference. (Photo by Alexander Martin Remollino / bulatlat.com)

Both Bukidnon and Agusan del Sur are also being geared to host jathropa and palm oil plantations.

“We believe that with the entry of foreign investments, which covet the resources and lands of our Lumad brothers and sisters, and the people of Northern Mindanao, the dire situation of the people who struggle each day in hunger and abject poverty will only become worse,” read a Panaw Kalinaw statement released during the Dec. 2 summit.

“These giant mining companies, plantations and other so-called “development” projects will only benefit those who already monopolize the ownership of our lands — the landlords and the big foreign companies.

“Alas, the armed forces of the state (have) been employed, not to serve and protect the people, but has been active in viciously clearing the communities in Northern Mindanao against any opposition to the entry of these foreign investments using guns and bombs at the expense of the very basic human rights, fundamental freedoms and welfare of the people.

“Furthermore, the Arroyo government has given full license, under the militaristic and vicious Oplan Bantay Laya and National Internal Security Plan Application to the Indigenous People to the armed forces of the state, the paramilitary groups and vigilantes to act as judge and executioner against the peoples in Northern Mindanao and in the country.”

Based on documents given to Bulatlat three years ago, Oplan Bantay Laya, or Operation Freedom Watch, aims to counter the “insurgency” by destroying what the government describes as the “political infrastructure” of the Communist Party of the Philippines-New People’s Army-National Democratic Front of the Philippines (CPP-NPA-NDFP). The so-called “political infrastructure” of the CPP-NPA-NDFP, as described by documents pertaining to the OBL, is made up of legal and progressive organizations, which are labeled as “front organizations” of the underground revolutionary movement. Under OBL, these “front organizations” as well as its leaders are targets for “neutralization”.

In Northern Mindanao, the implementation of OBL has led to divisions within tribes, as well as extrajudicial killings, tortures, forced surrenders, hamletting and food blockades in indigenous communities, and forcible evacuations — as vividly shown by the cases of Datu Mampaagi, Orong Namansusay, and Neneng Gayao. (Bulatlat.com)