Karapatan’s Marie Hilao Enriquez on why the Ampatuans should not be called “rebels”
[flashvideo file=https://www.bulatlat.com/wp-content/uploads/2009/12/marie_on_ampatuans_as_rebel.mp3 height=30 width=200 /]

MANILA — The road to justice for the brazen massacre of 57 unarmed civilians, including 30 journalists and media workers, in Maguindanao now appears more littered and twisted with treacherous diversions after the Arroyo regime declared martial law in that province. The declaration supposedly divided the Filipino people but so far, only the legislators affiliated with the administration’s Lakas-Kampi-CMD party and some politicians from Mindanao have expressed support for it.

The opposition, the progressive partylist groups, the constitutionalists, the senators and even Commission on Human Rights are opposed to martial law. Many, such as the human-rights summit delegates in Mindanao and members of peoples’ organizations and human-rights defenders in the Philippines and abroad, have said “never again to martial law” and held protests since Day One.

Since the last week of November, the public has been pushing for a swift, impartial investigation and the arrests and prosecution of the Ampatuans, the warlord clan tagged by witnesses as the masterminds and the perpetrators of the massacre. But the regime has been perceived to have acted rather slowly on the massacre.

The Ampatuans remain the regime’s “friend,” Arroyo spokesperson Lorelie Fajardo earlier declared. As friends of Arroyo, the Ampatuans had delivered the “votes” for Arroyo’s dubious victory in the 2004 elections. But as investigations into the Ampatuan massacre unearthed empty ballot boxes and caches of weapons bearing the signs of the Armed Forces of the Philippines– thus directly implicating Gloria Macapagal-Arroyo and reviving echoes of the “Hello Garci” tapes, on top of exposing a likely case of corruption in the AFP — Arroyo’s stalling changed into an attack. 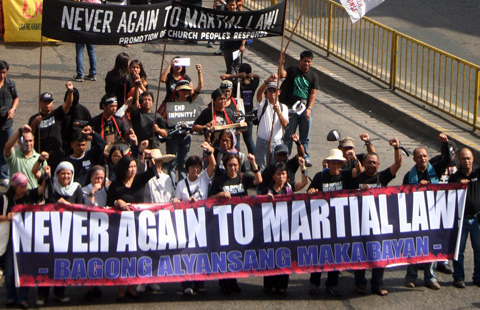 On the pretext of the government’s response to the call for justice for the victims of the massacre, said the Asian Human Rights Commision (AHRC) in a statement, Arroyo and her secretaries declared martial law. According to the AHRC, the “justifications of the ‘looming rebellion’ came not prior to but after the martial law.”

It would seem the Arroyo government is finally going after the Ampatuans as they promised in declaring martial law over Maguindanao. After the declaration, said the AHRC, the police and the military got a “free hand to arrest, detain persons and conduct searches without undergoing the tedious process of court procedures. They arrested not only the Ampatuans and their supporters but ordinary villagers and passersby whom they think were involved in the massacre. The notion of reasonable grounds and personal knowledge that the person to be arrested or detained is involved in the crime did not exist. They arrested persons — most of them are male, are taken into police custody and questioned without any lawyer being present, and they decided according to the persons’ testimonies whether he could be charged or not.”

The declaration of martial law in Maguindanao “violates the fundamental rights of the people,” said Joven Laura, Bayan Muna Partylist third nominee. A human rights lawyer from Sorsogon, Laura explained that if the Ampatuans are the targets of arrests, then it is “unnecessary to suspend the writ of habeas corpus of all the people” in Maguindanao. The president is equipped with enough constitutional power to suppress lawlessness even without martial law, Laura said, adding that “the only legal grounds for martial rule is rebellion and invasion; other than these, martial law would be unconstitutional.”