You Are Here: Home → 2010 → January → 21 → Filipino Legislator in Canada Pushes for Better Treatment of OFWs

Filipino Legislator in Canada Pushes for Better Treatment of OFWs

MANILA — Fil-Canadian unionist turned legislator Mable Elmore of British Columbia, Canada, visited the Philippines to reconnect with her family and dig deeper into the reasons why Filipinos have to migrate to Canada amid exploitative conditions being imposed on migrant workers there.

Canadian-born and raised, Elmore is the first Filipino member of the Legislative Assembly of British Columbia. Her mother migrated to Canada in 1965 to work as a nurse before she married Elmore’s Canadian father. “We have returned to the Philippines as a family several times,” she said in an interview, “We have lots of relatives in Cebu.”

But this year, Elmore’s schedule also included visits to offices of progressive members of the House of Representatives such as Kabataan Rep. Raymond Palatino, Gabriela Rep. Luzviminda Ilagan and Bayan Muna Rep. Neri Colmenares and key organizations who have been very vocal on their call for reforms in government policies. 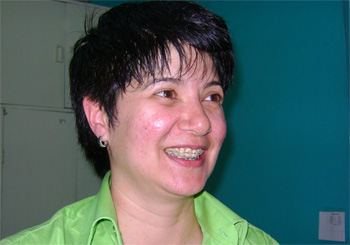 In her 10 years of being active in the labor movement as member of the Canadian Auto Workers and bus driver for a public transit, Elmore has witnessed the harsh realities that most migrant workers have to go through. And because the Philippine government is intensifying the sending of overseas Filipino workers, Elmore said, it seems to be distorting the realities of working abroad.

Despite the glossy image of Canada as one of the places where Filipinos would want to migrate to, poverty and lack of job security are realities her constituents have to contend with. Elmore said they have a very low minimum wage and high poverty rates at British Columbia. That is why her primary goal as member of the Legislative Assembly is to provide affordable housing, raise the minimum wage and support working single mothers.

As a unionist with the Canadian Auto Workers and a former bus drive,r Elmore participated in the longest public transport strike in Canada in 2004. The strike was against the privatization of the transport industry. The strike lasted for four months. Elmore said that because of the strike they gained back the portion of the public transport that had already been contracted to private companies. Among the many forums that Elmore has organized is the First Labor Peace Forum in 2006. She is also a delegate to the British Columbia’s Federation of Labor.

In Migrante’s dialogue with the legislator, Elmore was informed of how the government has dealt with unemployment and underemployment by promoting overseas employment. The lack of local job opportunities in the Philippines has forced at least 4,500 Filipinos to leave the country daily to seek work abroad. And with 10 percent of the country’s population working abroad, their remittances have propped up the economy especially in the face of the global financial crisis.

But despite what the so-called modern-day heroes have done, they remain to be victims of government neglect. Migrante briefed Elmore on the numerous cases of Filipinos who are asking for immediate repatriation and are victims of contract substitution, especially among those who are working in the Middle East.

While the number of cases of abuse in Canada is few compared to the Middle East, Elmore shared in the interview how Filipino caregivers in their country become victims of unfair working hours, lack of overtime pay and medical services.

“My call is that they should be granted permanent residency once they land in Canada. They should be allowed to bring their family members with them,” Elmore said.

Construction workers and employees in the fast food industry in Canada are usually recruited from the Philippines. Yet, Elmore said most of them have working permits that are tied to their companies making it hard for them to find other jobs.

She said they suspect that some OFWs working in Canada have gone underground, working as TNTs or Tago ng Tago (literally means ‘keep on hiding’) since they would be sent home once they are discovered. As a result, those who go underground have nowhere to turn to and ask for help should they need one. “They do not know what their rights are and they do not have confidence to assert their rights,” Elmore said.

Adding to the problems that OFWs face abroad is the painful separation of families. Elmore said this has contributed to many family breakdowns as Filipino migrant workers have to wait long before they are granted permanent residency permits that will allow them to bring their families with them. Such process, according to Elmore, takes five to eight years or even longer.

Elmore underscored how most parents have sacrificed their career and their life to give their families in the Philippines a better future. “It is a huge sacrifice that is unnecessary if only there is enough (opportunities) here,” she said.

Aside from Migrante, Elmore also took the opportunity to speak with environmental groups, namely the Center for Environmental Concerns and Agham, or the Association for the Promotion of Science and Technology for the People.

Agham chairman Dr. Giovanni Tapang told Bulatlat that they discussed the environment and climate change issue. “We related to her the mining activities of Canadian companies. We recalled how Placerdome, formerly Canadian Co., was involved in one of the largest mine spills in the Philippines,” Tapang said.

In 1993, a siltation dam of Placerdome collapsed pouring toxic mine waste into Mogpog river in Marinduque that killed all marine life and destroyed rich farming areas along the river due to heavy flooding. Another spill took place in 1996 with more than three million tons of toxic mine tailings spilling into the Boac river.

Tapang added that Elmore was willing to help foster solidarity between environmental groups in the country and in Canada as she realized the connection between the Canadians’ call for mitigation and the Filipinos’ demand for help in adapting to climate change.

“We described the vulnerability of Filipino communities to the effects of global warming,” Tapang said, “We thanked their support during (typhoons) Ondoy and Pepeng and informed her how such disasters could occur again and its possible impacts to the poor,” Tapang added. (Bulatlat.com)