Farmers and fisherfolk groups in Negros Occidental have been holding protests outside the capitol to denounce the mounting harassments experienced by Negrense farmers and farm workers. They also denounce a series of moves by landlords to file common and trivial offenses against peasants who demand land reform.

CEBU CITY — Farmers and fisherfolk groups in Negros Occidental have been holding protests outside the capitol to denounce the mounting harassments experienced by Negrense farmers and farm workers.

More than 50 members of the Negros chapters of progressive groups National Federation of Sugar Workers (NFSW), Kilusang Magbubukid ng Pilipinas (KMP), Pamalakaya, and Anakpawis Partylist participated in a protest action beginning Tuesday and to culminate in a program tomorrow, Jan. 22, the anniversary of the Mendiola Massacre in Manila. The protest also coincided with the holding of the 10-day national peasant caravan to demand land and justice for the Philippine peasantry.

“We have targeted up to 3,000 Negrenses from different sectors to join us in the final program, but the date is yet to be finalized,” Isidro Castillo, provincial chairman of NFSW, informed Bulatlat in a phone interview.

Nine of the 50 protesters are on hunger strike, refusing to take any sustenance except for water.

Castillo said that until the provincial government would act on their grievances they will be forced to continue with the hunger protest. 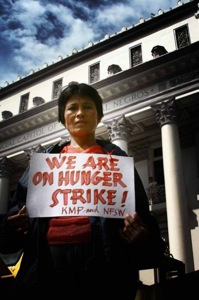 One of the hunger strikers in Negros Occidental. Click to view slideshow. (Photo by Owen S. Bayog / bulatlat.com)

The protesters are calling for the passage of House Bill 3059 (Genuine Agrarian Reform Bill) principally authored by the late Anakpawis Partylist representative Crispin Beltran; the end of extrajudicial killings on the island; and a stop to the criminalization of agrarian cases in the province, particularly those involving land holdings covered by the Comprehensive Agrarian Reform Program (CARP) and its progeny, the CARP Extension with Reforms (CARPER).

Castillo revealed that in the morning of Tuesday, Jan. 19, Governor Isidro P. Zayco met with leaders of KMP, Anakpawis, and NFSW to discuss the issues presented by the group.

Castillo said the governor had asked them to submit a list of criminal cases which the group believed to have taken root from the sugar workers struggle for land, the names of the people who filed the cases and the respondents.

This, Castillo said, will be used by the Governor to initiate a dialog between the two parties.

As of this writing, the group recorded a total of 374 criminal cases, which it claimed were “baseless,” filed in the last quarter of 2009 against members of NFSW and KMP.

Of this, 51 are of malicious mischief, 17 for libel, 103 for grave coercion, 17 for unjust vexation, 51 for usurpation of real property, 31 for forcible entry, 41 robbery in band cases, 52 qualified theft, and 11 ejectment cases.

Presently, 80 individuals have pending warrant of arrests while 13 are already detained in various detention centers in the province.

This, according to Castillo, reflects how government has reduced the issue of landlessness on the island to common and trivial offenses.

Zayco advised the group to file a “petition of recognizance,” which he said he would sign before it is given to the mayors of the cities and towns where the cases were filed.

Once filed, the governor promised to help in the immediate release of those detained, Castillo said.