Listen to an audio replay of the press conference held on Sunday, Feb. 7, by the colleagues, relatives and supporters of the 43 detained health workers.

MANILA — Relatives and friends of the 43 health workers — among them doctors, nurses and midwives — who were taken by the military and police in Morong, Rizal province, on Saturday are set to file on Monday a petition for habeas corpus before the Supreme Court. This, after the military on Sunday continued to prevent them, as well as the media, from seeing those arrested in person.

The health workers were attending a so-called “First Responders Training” sponsored by the health NGOs Community Medicine Foundation and Council for Health and Development in the farmhouse of Dr. Melecia Velmonte, a renowned infectious disease specialist at the Philippine General Hospital, whose house in Morong is a regular venue for health trainings, when 300 members of the 202nd Infantry Brigade of the Armed Forces of the Philippines and the Rizal Philippine National Police raided the property at 6 a.m. on Feb. 6.

The participants, according to witnesses, were lined up, frisked, handcuffed, blindfolded, forcibly taken and detained to Camp Capinpin, a military facility in Tanay, Rizal. 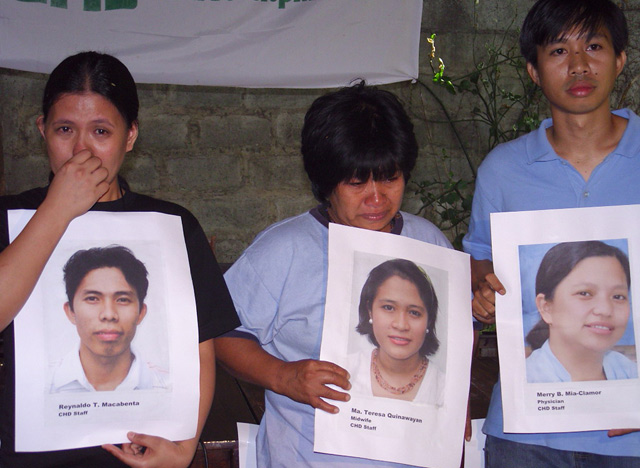 Some of the relatives of the detained health workers at a press conference on Sunday. (Photo by Janess Ann J. Ellao / bulatlat.com)

“We went to Camp Capinpin around lunch time. We asked every once in a while if we can see our colleagues but we were denied entry,” Dr. Edelina Dela Paz, vice president of the Health Action for Human Right, said in a press conference in Quezon City on Sunday. The 43 were also denied their legal counsel, she said.

Dela Paz said that the ABS-CBN reporters who were allowed inside the camp were later told by the military that the detainees could not be presented yet to their families and colleagues. “What are they (the military) doing that we cannot see them?” she asked.

Lt. Col. Noel Detoyato, civic-military operations chief of the Army’s 2nd Infantry Division, said in a report that the 17 men and 26 women who were arrested and detained were members of the New People’s Army, the armed wing of the Communist Party of the Philippines. He said the 43 were conducting training on how to make improvised explosives.

The military said a caliber .45 pistol, a caliber .38 revolvers, three hand grenades and bomb-making materials were seized from the 43 during the operation. 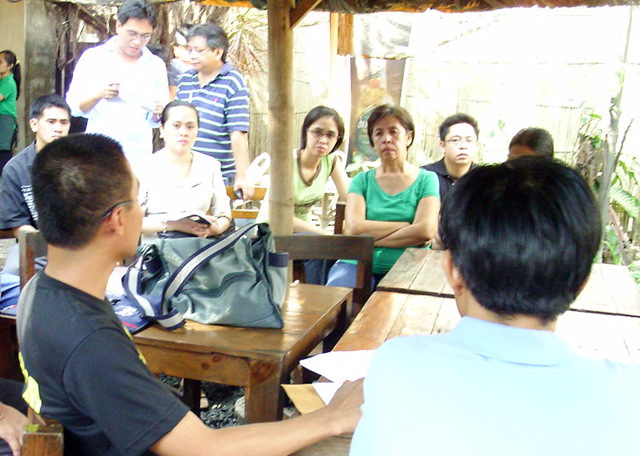 The relatives confer with their lawyers and are set to file a habeas corpus petition on Monday. (Photo by Ayi Muallam / bulatlat.com)

But colleagues of those arrested denied the allegation. “It is not true that they were training how to create a explosives,” said Dr. Eleanor Jara, executive director of the Council for Health and Development, a health NGO whose members were some of the detained. “It is sad that the very people who want to help poor people are also the same people whose rights are being violated,” she added.

Jara said the weapons and ammunitions were allegedly planted by the AFP and the PNP at the training venue. “They (the military) can claim whatever they want but we do not believe it,” Jara said.

“As human-rights workers, we are very keen about search warrants,” said Roneo Clamor, deputy secretary-general of Karapatan, in pointing out that the search warrant used for the raid stipulated only the name of a certain Mario Condes. Relatives of Dr. Velmonte said they did not know anybody by that name. Clamor’s wife, Dr. Merry Mia-Clamor, is among those detained.

Dr. Julie Caguiat, executive director of the Community Medicine Development, another health NGO, bewailed the treatment of the health workers. These are the health workers, she said, who have chosen to remain in the country to serve their fellow Filipinos instead of going abroad. “They volunteered and sacrificed but this is what they get in return,” Caguiat said, adding that no amount of AFP propaganda can tarnish the aim of the health workers to help poor people on health issues.

Clamor of Karapatan said that this atrocity is not an isolated case. He said it is a sign that the military is rushing to meet the deadline of Oplan Bantay Laya 2, the Arroyo regime’s counter-insurgency program that does not distinguish between an armed guerrilla and an activist who is out in the open and lives within the bounds of the law.

In the 2009 human-rights reports of Karapatan, Oplan Bantay Laya 2 is considered the bloodiest and most brutal counterinsurgency campaign unleashed by any president. It aims to eliminate the “enemies of the state” that include not only the armed movement but also legal organizations who have been criticizing the government for its failures.

The report said that state forces have been red-tagging activists and protesters as “front organizations” or sympathizers of “communist or rebel groups.” This has resulted in widespread human-rights violations, extrajudicial killings, torture and enforced disappearances under the present administration. Karapatan said more than 1,000 activists, mostly peasants, have been summarily executed since 2001, the year Arroyo took power. (Bulatlat.com)