Alex Montes: A Doctor to the People, Hurt and Broken

Dr. Alex Montes is a retired surgeon. But even in retirement, he found time to serve the poor through the medical missions he organized and joined and through the trainings he conducted for community health workers and volunteers. Today, he is behind bars — abused, tortured and humiliated by a regime that is terrified by his passion.

It’s a vocation that springs not just from a lifelong passion for medicine but also from faith. “It was always in connection with his religious affiliation with the UCCP,” his niece, law student Carla Montes Rocas, 24, told Bulatlat, referring to the United Church of Christ in the Philippines, one of the Protestant religious denominations in the country.

“He’s a quiet person,” said Carla. As a religious family affiliated with the UCCP, Carla said they believe that God is not only found inside the Church but also among the people.

Dr. Montes took up his primary, secondary and pre-med schooling at the Silliman University in Dumaguete City. He became a surgeon at the UERM in Manila where he based himself since. He practiced medicine at different hospitals such as Bethany Hospital and Capitol Medical Center, “all of which are clearly legitimate hospitals,” Carla said. 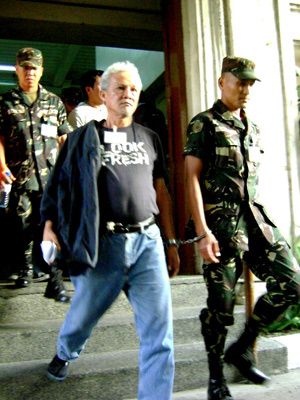 Dr. Alex Montes, handcuffed to a soldier, at the Court of Appeals (Photo by Janess Ann J. Ellao / bulatlat.com)

At times, Dr. Montes brought along some of his grown children to medical missions in needy communities where they treat sick residents and give out medicines. Some of his children are also doctors. Their side of the Montes family, said Carla, is composed mainly of doctors; Carla’s family is composed mostly of lawyers.

“Uncle Alex has been doing what he’s doing for years. After every medical mission, he’d go back home immediately,” Carla said.

So it came as a shock to her and to her family that Dr. Montes is being accused by the military of being a communist guerrilla.

He is one of the 43 health workers arrested by the military on Feb. 6 and accused of holding a bomb-making training in Morong, Rizal. From being a bomb expert with the New People’s Army’s, Dr. Montes and the other 42 health workers being detained at Camp Capinpin are now accused of being members ofthe NPA’s “health bureau,” a claim that many, least of all Dr. Montes’ friends and colleagues, find absurd.

Dr. Montes was the lone witness, his statements the lone testimony that the lawyers for the 43 health workers sought to hear before the Court of Appeals yesterday, during a hearing on the habeas corpus petition they filed to compel the military to produce the 43. The armed forces initially ignored the Supreme Court’s earlier ruling ordering them to present the health workers, prompting critics to accuse it of arrogance.

“He gave a substantial testimony,” said Atty. Romeo Capulong, the lead counsel for the detainees, of Dr. Montes. “He recounted their ordeal from the time their health training was raided on the morning of Feb. 6 up to their condition in detention at present.”

During the hearing, the counsel for the military repeatedly tried to block Dr. Montes’s testimony from being heard, citing the inappropriateness of the CA as the venue for such, and another time citing their supposed fear of how the media will report his testimony. But in the end, Dr. Montes took the stand and told his story.

He spoke of their fright upon seeing the armed soldiers barging into the farmhouse of Dr. Melecia Velmonte, where they were conducting the health training. He spoke of the commotion that ensued, of the failure by the raiding team to tell them why they were being taken into custody.

Dr. Montes spoke of the handcuffs slapped on his wrists and the dreadful one-hour trip to what turned out later to be Camp Capinpin, in Tanay, Rizal, a military camp where the 2nd Infantry Divison of the army is based.