Migrante said it would flood the Kuwaiti government with appeals for Pawa’s life this week . The emir usually gives clemency to individuals on death row during the Kuwaiti Independence Day on Feb. 25.

On Jan. 19, Kuwait’s highest court upheld the death sentence on Pawa for the killing two years before of the 22-year-old daughter of her employer. Pawa, 33, is mother to two children. She is from Zamboanga del Norte. She graduated with a degree of in banking and finance but chose to work as a domestic helper in Kuwait so she could better provide for her family.

Everything changed on May 14, 2007, when Pawa’s employer found his daughter dead. Pawa was tried and, in April 2008, the Kuwaiti Court of First Instance declared Pawa guilty and sentenced her to die. This was later affirmed by the appellate court.

Pawa has repeatedly pleaded her innocence. She asserted that the knife used in the crime and the bloodstains on the victim’s clothes that could have directly linked Pawa to the crime did not have her fingerprints. 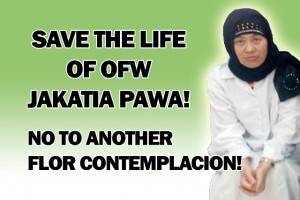 An online campaign to save Jakatia Pawa. (Photo from mackyramirez.wordpress.com)

Previous reports claimed that Vice President Noli de Castro would personally deliver a letter from President Gloria Arroyo to the emir of Kuwait to plead for Pawa’s life. “Arroyo should disclose the report on the government’s efforts to save Pawa’s life,” Migrante chairman Garry Martinez said, because no reports came out whether the letter had indeed been received by the emir.

The relatives of Pawa’s employer firmly refused to issue a tanuza or affidavit of forgiveness to Pawa. But Martinez believes that through the mass movement, rallies and online petitions, among others, Pawa might still be saved.

Migrant workers, Muslim leaders, women activists, progressive legislators and a presidential candidate forged an alliance on Feb. 4 to help save Pawa. In their petition, they highlighted the government’s failure to give Pawa a lawyer during the early stages of her trial. According to the Save the Life of Jakatia Pawa Now, this negligence resulted in the conviction.

“We harbor no illusions that Migrante or the coalition we have forged can guarantee that Pawa would be saved,” Martinez said, adding that it is the Philippine government that has the necessary machinery to make it possible.

“We are afraid that Pawa might end up as an additional statistic to Arroyo’s notorious record. She has the most number of OFWs who died under her term,” Martinez lamented. Six OFWS have been beheaded under the Arroyo administration.

One of the petitioners in the coalition is Muhaymin Astih, vice chairman of Salam Mosque Madrasah Advisory Council. He said on Feb. 4 that they would participate and support the alliance to save their fellow Muslim. “We believe that Filipino Muslims and the Kuwaitis believe in one God,” Astih said. “It means that we both believe that the preservation of life is mystic and in its sanctity.”

Catholic Sister Maureen Catabian of the Religious of the Good Shepherd told Bulatlat that they are also supporting the cause to save Pawa. “We are talking about the life of a fellow Filipino and OFW,” she said, “Their remittances largely contribute to our economy. So their sacrifices should be matched with services.”

“When OFWs send home much-needed remittances, they are called ‘Modern Day Heroes.’ But when they are faced with life and death situations, they are mercilessly abandoned,” Gabriela Rep. Luzviminda Ilagan lamented.

President Gloria Arroyo should personally appeal the case to the emir, said Gabriela Rep. and senatorial candidate Liza Maza in a statement. Gabriela Women’s Party, also a member of the alliance, has sponsored three house bills and 18 house resolutions for the rights and welfare of OFWs.

Nacionalista Party presidential bet Senator Manny Villar sent a solidarity message to the alliance. His Senate office is a member of the alliance to save Pawa. “This is not just the fight of Jakatia but of the rest of the Filipinos,” Villar said.

Martinez said all these people committed to save Pawa should know of the updates on her case so they could respond appropriately. “Do not leave us in the dark,” he told the Arroyo government.

Migrante said it would flood the Kuwaiti government with appeals for Pawa’s life this week . The emir usually gives clemency to individuals on death row during the Kuwaiti Independence Day on Feb. 25. (Bulatlat.com)