MANILA — Urban poor group Kadamay and progressive organizations commemorated the 24th anniversary of People Power I not with glamorous and star-studded concerts but with a protest march.

The protesters left Welcome Rotonda around 2 p.m. after a short program. They marched toward Mendiola near Malacañang. More than 300 people from different urban poor communities came to participate in the protest action dubbed as “March of the Poor.”

The poor and the workers will never tire of fighting for their rights, said Catherine Dichoso, NCR spokesperson for Kadamay. “The rally here in Mendiola proves our determination to hold the past and present administrations accountable for their anti-poor programs and policies like those in effect during the reign of the Marcoses.” 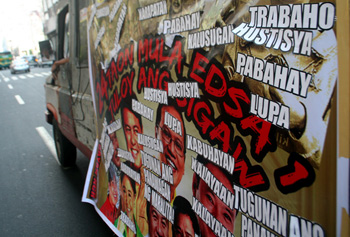 Presidentiables Villar and Aquino told to compete in their poverty alleviation projects instead of holding fanfares. (Photo by Janess Ann J. Ellao/bulatlat.com)

With the coming elections, Rodriguez said short-term and long-term political platforms would be the basis for the choice of the country’s electorate. He warned that the continuing poverty could lead to another people’s uprising. He said it is not true that the Filipino people are tired of holding another people power uprising. The “worsening conditions of the people will lead them again to the parliament of the streets.”

Rodriguez added that the two leading presidential candidates, Senator Manny Villar and Senator Noynoy Aquino, should compete in their poverty alleviation projects instead of holding fanfares. The Nacionalista Party and Liberal Party celebrated the anniversary of the People Power 1 at SM Mall of Asia and Araneta Coliseum, respectively.

Rodriguez said “the enduring hardships that our country faces today is a tremendous insult to the spirit of EDSA 1 and to the rest of the Filipino people.” (Bulatlat.com)