You Are Here: Home → 2010 → March → 1 → Community Broadcasters Worldwide Condemn Impunity in the Philippines

BANGALORE, India — More than 300 community broadcasters from 21 countries unanimously approved a resolution condemning the culture of impunity in the Philippines during the conclusion of the second regional conference of the World Association of Community Radio Broadcasters (AMARC)-Asia Pacific in Bangalore, India, last February 23.

“AMARC-AP hereby condemns in the strongest terms possible the culture of impunity in the Philippines, particularly the killing of broadcasters and journalists,” the resolution said.

Introduced by Kodao Productions, the resolution cited the killings of more than 100 journalists, many of them broadcasters, since 2001 under the Gloria Macapagal-Arroyo government. It also said that “the Philippines is now acknowledged as ‘the most dangerous country for journalists,’ especially after the massacre of 58 persons, including 32 journalists, last November 23, 2009.”

Community broadcasters gathered in Bangalore to reaffirm their commitment to “safeguard, uphold and promote Freedom of Opinion and Expression.” It also affirmed that “everyone has a right to life with dignity… (and that) all people have the undeniable right to be informed about decisions affecting the quality of their lives such as right to health, right to education, right to work, the right to free expression, and the right to information.” 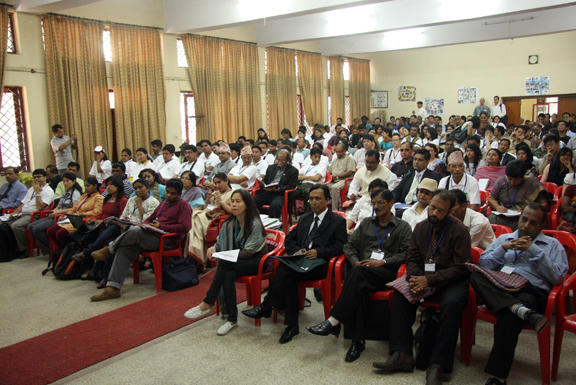 Participants to the AMARC-AP conference in Bangalore. (Photo by Raymund Villanueva / bulatlat.com)

They also called for supporting initiatives that aid access to digital and other technological opportunities to enable community broadcasting in an ever-widening scale, while calling for creating spaces on the airwaves for diverse and marginalized voices, irrespective of caste, creed, race, color, gender, sexuality, faith, and differently abled or other differences.

In the same conference, Radyo Sagada’s Mary Carling was instrumental in the creation of an informal Indigenous Peoples’ caucus that managed to include a supplement to the Bangalore Community Radio Declaration. The supplement called attention to the “immediate need for Indigenous People’s right to vote, the right to self determination, rights to land, resources, livelihoods, cultures, and their right to live with dignity.”

In a workshop, AMARC-International board president Steve Buckley of Canada said that AMARC should look into the Philippines’s human rights situation and media killings more closely.

Other resolutions ranging from removing the ban on news in the recently-adopted India Community radio legislation and simplifying license application procedures to calling on the Government of Bangladesh to forward the process of granting licenses for community broadcasting were endorsed by the conference participants.

?AMARC is an international non-governmental organization serving the community broadcasting movement, with almost 3,000 members and associates in 110 countries. Its goal is to support and contribute to the development of community and participatory radio along the principals of solidarity and international cooperation. Its international headquarters is based in Montreal, Canada while it’s Asia-Pacific offices is located in Kathmandu, Nepal.

?The Philippines was represented by Kodao Productions, Isis International-Manila, Radyo Sagada and Rainbow Rights Coalition. Isis’ Bianca Miglioretto was re-elected by the conference as AMARC-AP vice president for its Women’s International Network while Rainbow Rights Coalition’s Maica Lagman was elected as regional board deputy president. Other members of the new regional board include The newly -elected board of directors comprises of Ashish Sen, India as president, Shane Elson, Australia as Treasurer, Raghu Mainali, Nepal as vice-president for South Asia, and Imam Prakoso, Indonesia as vice-president for South East Asia. The assembly also ratified the strategic working plan of AMARC Asia Pacific for 2010-2013.

?Kodao and Isis are AMARC-AP’s charter members from the Philippines when it was formally formed during the Jakarta (Indonesia) Conference in 2005. Radyo Sagada and Rainbow Rights were awarded full membership status by unanimous votes during the Bangalore conference. (Bulatlat.com)