MANILA — “Times change but the problems that women face –- discrimination, inequality, poverty, violence — never do. They only take different forms. It is a challenge for us to expose and oppose them through new and creative ways.”

Aspiring senator and current Gabriela Women’s Partylist Rep. Liza Maza said this while in the thick of preparations for the International Women’s Day last March 8. Wearing one’s message and “passions” is apparently one of her creative ways. So last week, she took a “break” from campaigning for senator to launch her newest “statement gowns.” 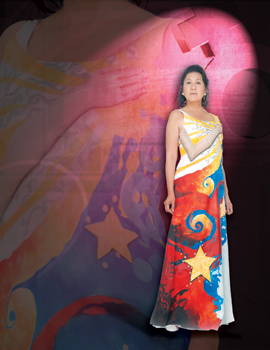 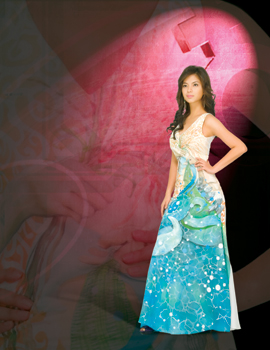 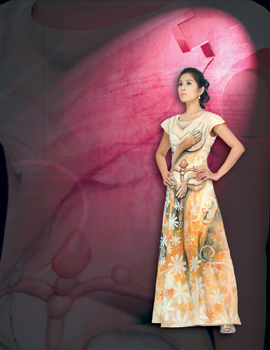 Joining her as “models” this time were popular actress Angel Locsin and top triathlete Sandra Araullo. They donned gowns designed by Dennis Cabalinan, gowns that symbolize patriotism, the struggle versus violence against women and the fight against poverty.

In a campaign mode that rival male senatorial candidates would be hard put to copy, Maza used fashion as medium for her message and launched her “Maza line of clothes.”

“Fashion is an important tool of advocacy, most especially in the pursuit of change in the lives of our fellow Filipinos,” she says.

During the nine years Maza has served as member of the House of Representatives while remaining a progressive activist, she has been known for making “fashionable statements” in the streets or in Congress. For instance, at the height of allegations of corruption against former President Joseph Estrada, Maza called for his resignation by mounting the acclaimed “Women’s Passion Show.”

When former United States President George W. Bush addressed the Philippine Congress in 2003, she wore a Filipiniana ensemble with a hand-painted panuelo depicting her opposition to US military intervention and war on terror. During President Gloria Macapagal-Arroyo’s final State of the Nation Address last year, she stole the show with a gown made from katsa (flour sackcloth) that was hand-painted with the image of GMA and other proponents of what she called as unconstitutional Constituent Assembly.

For the sake of clarity, most of her fashion statements have never been subtle.

Now as she runs for senator and launches her “Maza line of fashion,” she formalized her use of fashion and declared that “Nationalism is indeed fashionable.”

As member and then leader of Gabriela, Maza has entered the House of Representatives in 2001 as a representative of Bayan Muna, and in 2004 and 2007 under Gabriela Women’s Partylist. As a legislator and an activist leader with aspirations for “genuine national democracy,” her being “exposed to many issues and challenges” has exponentially increased from just being a mass leader, she told Bulatlat in an interview. Before, she says, she had to learn to be able to work with and lead many kinds of people. “It’s such a huge challenge; you’d need to stretch your grasp, remould yourself in the process.”

As an activist legislator, she says work “is fine.” She has no problem reading up and studying laws, presenting bills and resolutions. But what’s difficult for her is, sometimes in Congress “we have to listen to so much crap… But you have to have patience to withstand it and understand.” It comes with her “dedication to serve the people.”

She adds that she is also constantly beset with the challenge of “how to be creative in convincing others of our ideas and convictions.” Which is why from time to time, she resorts to fashion statements.

This May elections, Maza believes that “We have to step up the women’s fight for justice and human rights.” After more than 30 years of being a progressive activist and leader, and nine years of being a nontraditional member of the House of Representatives, she is taking the fight in a “whole new level by running for the Senate.” (Bulatlat.com)