The Other Morong Detainees: In Jail Since 2007 Strike, Workers May Soon Be Freed

MANILA — After almost three years of being squeezed in a tiny prison cell, three employees of a company based in Cainta, Rizal, are likely to be freed this month, ending a chapter in a bitter saga that began in 2007 when they, along with 17 other workers, were arrested while on a strike calling for decent wages.

Andy Salarzon, 32, gained temporary liberty on March 4 after posting bail through a surety bond, while the three remaining in jail — Joseph Atienza, 26, Pulido Baguno, 33, and Claridad Claro, 31 — will be freed sooner than expected as they are now close to completing requirements for their surety bond, thanks to support from trade unions and other rights groups here and abroad.

The 20 were arrested after they went on strike while employed at Karnation Industries Inc (Pansy Accessories), a maker of home decor and accessories, complaining about low salaries and benefits.

The three detained workers welcomed the prospect of freedom, said the Center for Trade Union and Human Rights (CTUHR), even if it is only temporary and comes at a cost of an “excessive amount” of P80,000 bail per detained worker.

In November 2009, the Morong (Rizal) regional trial court granted bail for temporary liberty of 18 surviving Karnation workers out of 20 imprisoned since May 2007. The company appealed the bail but it was denied on Jan. 26, 2010, although the workers received a copy of the decision only this month. 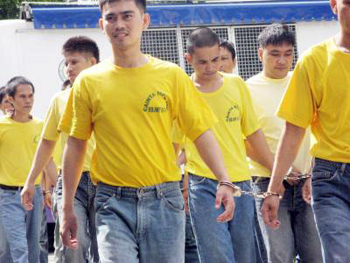 Some of the 20 Karnation workers arrested after the strike in 2007. (Photo courtesy of CTUHR)

Fourteen of the 20 jailed workers were freed temporarily one by one shortly before Christmas last year, after each posted bail of P60,000. Although the court denied the motion of Karnation Industries against the workers’ bail, the court listened to Karnation’s suggestion and increased the amount of the workers’ bail to P80,000.

While in prison, with “no space for everyone to sleep at the same time,” the workers contracted various illnesses. Two of them, Melvic Lupe and Leo Paro, died in 2008 and 2009, respectively, due to tuberculosis and complications. The rest reportedly exhibited symptoms of beriberi, tuberculosis, skin diseases and malnutrition. They were reportedly fed little and at times, even late.

On paper, the workers’ alleged crime is “serious illegal detention.” Their employers accused them of having padlocked the gates of the factory premises when they struck on May 2, 2007. The workers claimed, however, that they left the gates open, thus allowing the company to continue its operations and allow vehicles, employers and residents to enter or exit the factory’s compound.

In granting them bail, the court upheld the arguments of lawyer Remigio Saladero, the workers’ counsel, that “the evidence of guilt is not strong.” Saladero also noted that the witness presented did not see the accused workers putting the chains on the gate.

In reality, Saladero said, the workers’ actual “crime” for which they are being punished now with loss of job and livelihood, imprisonment and costly litigation is their having launched a strike. Their case arose out of a labor dispute, said Saladero, as shown by the fact that “private complainants and the accused belong to the same company.”

Karnation Industries, makers of home furnishings and home decor for export Inc., is known to its international business partners as Pansy Accessories. Based in Cainta, Rizal, Karnation (Pansy) had approximately 300 workers, some of whom had successfully registered a union as chapter of a certain Congress Labor Organization in 2007.

What led the workers to unionize were low pay and lack of benefits. But even after they had registered their union, their working conditions did not significantly improve. So the workers decided to go on strike. It resulted in the arrest of 20 unionists on the eighth day of the strike. The strike was thus ended. Inside Karnation, the workers who remained employed were reportedly terrorized.

The strike was held under the Congress Labor Organization specifically to protest illegal dismissal, nonpayment of holiday pay, 13th-month pay, night differential and to protest their salary which, at P170, was less than the P320 mandated daily minimum wage at the time.

Since their arrest, the 20 unionists recounted that they have suffered many letdowns — their private lawyer left after a few hearings and after receiving his fees; their union organizer abandoned them after their detention; lawyers came and went while they lacked the funds to sustain their legal defense.

A mother of one of the jailed unionists who used to be an activist in the ’80s traced back her friends in the progressive mass movement until they found an ally in CTUHR and Pro-Labor Legal Assistance Center (PLACE). With the suport, too, of progressive Filipino labor groups, unions and rights organizations here and abroad soon started sending letters of appeals and protests as well as financial support in behalf of the jailed unionists from Karnation.

The jailed workers and their supporters believe they owe their temporary freedom to trade unionists here and abroad, who sent a “barrage of letters” to the judge that “undoubtedly influenced her decision to grant the detainees’ petition to bail and upheld her decision despite opposition from Pansy Accessories Corp./Karnation Industries.”

Also, they believe the letters they sent “to government authorities including the Commission on Human Rights compelled the latter to visit the jail again last January to look into the detainees’ condition, although their pledge to investigate the death of Lupe and Paro, remains to be seen.”

“In a move to assist the immediate, though temporary release, of the remaining detained workers, trade unionists from other countries have also started raising funds for bail assistance,” reported the CTUHR.

With the temporary freedom, the union officers are determined to continue their fight particularly in seeking justice for the two who died in detention without proper investigation.

The officers are also set to revive their labor case (union busting and illegal dismissal) filed at the Department of Labour and Employment in Region 4. They vowed to continue their union organizing at Karnation Industries and Pansy Accessories Corp. as well as in reaching out to other workers. CTUHR reported that the Karnation workers as well as their relatives are now also active members of Workers’ In Struggle for Employment, Empowerment and Emancipation (WISE3). (Bulatlat.com)