In a 56-page decision penned by Associate Justice Lucas Bersamin, the SC said the prohibition under Article VII, Section 15 of the Constitution against presidential appointments immediately before the next presidential elections and up to the end of the term of the President does not apply to vacancies in the Supreme Court.

Nine out of 15 justices said there is nothing under the law that prohibits Arroyo from appointing the next chief magistrate upon the retirement of Chief Justice Reynato Puno on May 17.

The SC also dismissed the argument that the judiciary can still have an acting chief justice to allow the next president to make the appointment. The SC said there is no provision in the Constitution providing for the designation of a temporary chief justice because the post is crucial during an election period since the High Court acts as the final arbiter under the Presidential Electoral Tribunal (PET).

Before the SC decision, past presidents of the Integrated Bar of the Philippines (IBP) issued a joint statement warning against circumventing the ban on midnight appointments. 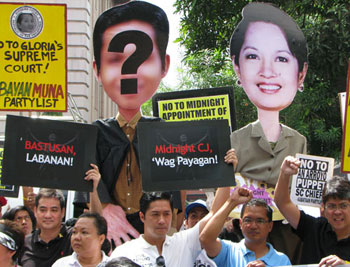 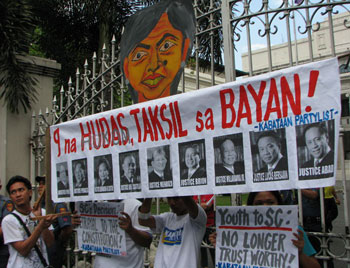 Those behind persistent moves for a “midnight appointment” of a new Supreme Court chief justice face not only imprisonment but also perpetual disqualification from holding government posts, said the past IBP presidents in a statement issued last week.

“What is clear is that anyone taking part in this shameful conspiracy to trample upon the Constitution in blind obedience to the whims of today’s wielders of power will have to contend with penal laws that punish their actions,” they said.

The chapters of the IBP in Eastern Visayas and Southern Luzon have already asked the Supreme Court to prevent the Judicial and Bar Council (JBC) from submitting the shortlist of nominees to the position of chief justice to Arroyo during the appointment ban period.

Anakpawis Rep. Joel Maglungsod said the SC decision may be legal but it is morally wrong and dangerous to the people.

“It is disappointing that the Supreme Court allowed itself to stoop so low, almost at the same level as the Office of the Ombudsman, that have so far acted as an appendage of the President’s office,” Maglungsod added.

The National Union of Peoples’ Lawyers (NUPL), an organization of human rights lawyers and volunteers, has opposed the decision saying that it would affect ‘the preservation of the integrity of our judicial system and the effective delivery of justice to the people.’

“In her desire to appoint a new chief justice, President Arroyo will be transgressing several laws and the Constitution and will also be breaking a long tradition already in place in our judicial system, and will also be encroaching upon the powers and the independence of the Judiciary,” the NUPL said.

Out of the 15 present members of the SC, only Puno is not appointed by Arroyo.

“It is really Arroyo’s Court because most of them are appointed by the President, it just so happened that she needs to appoint because there were retirees and resignations,” deputy presidential spokesperson Charito Planas said in a press briefing this week.

Planas added, however, that “Arroyo Court” does not mean the SC serves at the pleasure of the President and will be accommodating to all her wishes.

In a statement, Kabataan Rep. Raymond Palatino said a midnight chief justice would be “the last nail to seal the coffin that is Arroyo’s perpetuation into power.”

“The appointment of the next chief justice will only give Arroyo the power to control and consolidate the judiciary for her own interests,” Palatino said.

“We are worried about the Supreme Court decision because it would mean Arroyo can now control the Supreme Court. An Arroyo-appointment would taint the sanctity and independence of the high court. Any appointment she makes will be flawed and suspect,” Palatino added.

Bayan Muna Rep. Neri Javier Colmenares said Arroyo wants to appoint the next chief justice in her attempt to ensure favorable ruling in issues affecting her plan to perpetuate herself in power and protect herself from criminal liability for the various crimes committed during her term.

“There will definitely be a host of criminal cases against Pres. Arroyo and many of her subordinates for graft and corruption, electoral fraud and human rights violations. Many of these cases will definitely reach the Supreme Court for adjudication,” Colmenares said.

Colmenares also said Arroyo is trying to control Congress by ordering her subordinates to run for congressional seats through the district and party list elections. “She hopes that with her control of Congress and the Supreme Court, she will be able to hold hostage the next president of the Philippines. The plan to perpetuate herself in power continues,” Colmenares said. (Bulatlat.com)