Pagbabago! and Ibon Foundation dare the Filipino people to be more critical in choosing their candidates. High on their “people’s criteria” are concrete steps by the presidential candidate to stamp out corruption and to promote human rights and stop abuses. 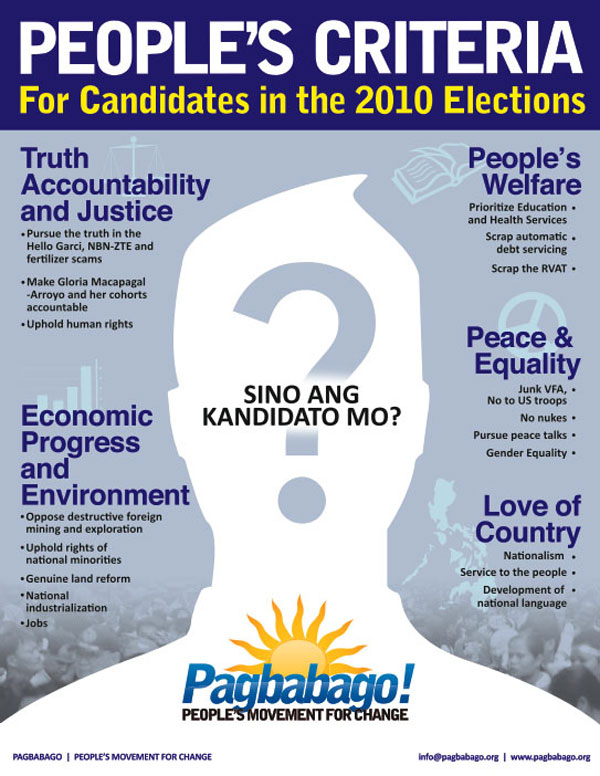 MANILA — Independent think tank Ibon Foundation and Pagbabago! People’s Movement for Change gauged the presidential aspirants in a recently held forum at the University of the Philippines in Quezon City.

Using the following 12 specific issues as criteria, the two groups called on voters to be wise in choosing candidates:

1) On corruption. Will they seek the truth behind the “Hello, Garci”, NBN-ZTE and fertilizer scam to name a few of the anomalies that involved the president?

2) Human rights. Will they end the policies giving rise to human rights violations?

3) National patrimony. Will they protect the national patrimony and environment by opposing large-scale, export-oriented, and foreign-led extractive industries such as mining and oil exploration?

4) Agrarian Reform and agricultural development. Will they work for genuine agrarian reform anchored on the distribution of land to the tillers?

5) Nationalist Economic Policies. Will they work for national industrialization?

6) Jobs and wages. Will they promote job creation and uphold job security by protecting domestic industry?

7) Social Services. Will they stop the commercialization and privatization of education and health services? 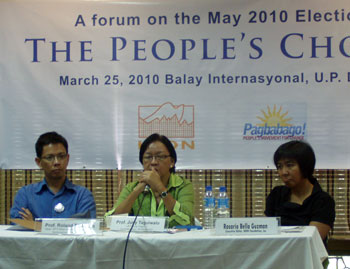 8 ) Taxes. Are they in favor of scrapping the reformed value added tax (RVAT) and other regressive taxes?

10) Peace process. Will they pursue the peace talks with the Moro Islamic Liberation Front and the National Democratic Front of the Philippines?

11) Gender. Will they uphold gender equality?

“It is during election period that people’s issues are brought up and used by politicians to win votes, but there is a need to determine the genuinely pro-people, patriotic and democratic candidate,” said Roland Tolentino, dean of the UP College of Mass Communications and spokesman of Pagbabago!.

Guzman said that Ibon’s No. 1 criteria is the candidates’ stand on corruption and prosecuting President Arroyo for her alleged crimes. Teodoro had said that he will not get involved in the prosecution of the president and will let the justice system work. Instead, he said he would focus on moving the country forward. Aquino, on the other hand, has vowed to prosecute the president but that he voted against playing the Garci tapes in Congress and even lauded Arroyo for her “I am sorry” speech.