MANILA — While walking towards the market, Cielo Marie Bayson, chairperson of the College Editors Guild of the Philippines-Cordillera (CEGP) and Kabataan Partylist regional coordinator Adrian Galang stopped after noticing that passengers of a red car took photos of them.

“Who else would do such things?” Galang asked in a statement issued recently. Some students would have taken the situation lightly, but since Kabataan Partylist and other youth groups such as CEGP have become targets of Oplan Bantay Laya 2 – the counterinsurgency program of the Arroyo administration that does not distinguish between combatants and civilians, legal and underground organizations – Bayson and Galang immediately exposed the alleged military surveillance before the media.

What happened to Bayson and Galang is not an isolated incident. Bulatlat has monitored other cases of harassment of members of progressive student organizations. There is also an alarming presence of soldiers in state universities where such groups are active.

These incidents have intensified to a point that Joanna Rose Adenit, former chair of the Gabriela chapter at the Philippine Normal University (PNU), felt the need to always bring something to defend herself with everywhere she goes. Katherine Vera, a friend of Adenit and an alumna of PNU, told Bulatlat, “She was being followed by the military.”

Vera said the intense harassment and surveillance on Adenit began when the PNU administration allowed officers from the Armed Forces of the Philippines-Civil Military Operations (AFP-CMO) to hold an “Information and Awareness Forum” at the university last March 5, 2007. “It was as if there was a war going on,” Vera said, referring to the presence of soldiers roaming the campus then. 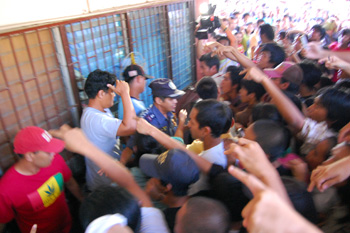 Vera said the military took pictures of students who were contradicting their claims, saying that it was merely for documentation purposes. But, she said, it was obvious that they were singling out the students for surveillance later on. “They took photos of us so Torch also took photos of them (Military)” Vera said. The Torch is the official student publication of PNU.

The same forum was conducted by the CMO at the Polytechnic University of the Philippines in August 2008. The military’s presentation included a testimonial from a certain “Agnes” who claims to be a former member of the League of the Filipino Students who eventually became a New People’s Army guerrilla. Catalyst editor-in-chief Joyce Llanto said they were allowed to interview “Agnes” but, “we were surrounded by soldiers in full battle gear.”