A week later, Llanto said they were surprised when a bundle of comic books was found in an empty classroom. The comic books portrayed student organizations of PUP as members of the Communist Party of the Philippines (CPP). The comics included an illustration of a girl wearing a headband – the same headband that Llanto used while interviewing “Agnes.”

After the forum sponsored by the military, the surveillance on student leaders and organizations intensified. An article published in The Catalyst titled “S.I.N. Machine: Ang Makinaryang Paniktik ng AFP sa Pamantasan,” revealed that a student who was a member of the Reserved Officers Training Corps’ Cadet Officers Candidate Course (ROTC-COCC) described how they are being used to spy on members of progressive organizations in their campus.

The article exposed how students enrolled in COCC were given rank promotions and even money for their intelligence reports. “The military are using the ROTC as passports inside PUP,” JM Panganiban of Anakbayan told Bulatlat.

Not satisfied with using the ROTC, intelligence officers also do surveillance work themselves. This was confirmed when intelligence agents were caught taking pictures of students who were participating in a protest action inside PUP on August 29, 2009. “Some students tried to accost the four intelligence agents but the latter ran and hid inside the ROTC office,” Llanto said. 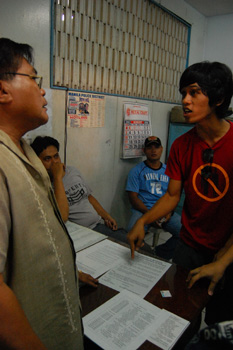 (Photo Courtesy of The Catalyst / bulatlat.com)

The military’s presence is also felt at the Los Banos campus of the University of the Philippines. In an interview with Bulatlat, Perspective editor-in-chief Arbeen Acuña related that heavily armed military officers were first seen in their campus during the Laguna Peace and Order Council forum that was held in the state university “The Perspective tried to enter the venue to cover the event but we were sent away,” he said.

Acuña said they tried to take photos of the soldiers when they heard security guards reporting in their radios that the two ‘deltas’ are ‘positive’ prompting other soldiers to arrive to fetch their colleagues. “We pretended that we were raising our phones because of poor network signals,” he said.

“How could the military and local security guards have direct contact?” Acuña said, speculating that the university administration and the military are probably collaborating.

After that, more military officers became visible in their campus. A day after President Gloria Macapagal-Arroyo’s last state of the nation address, Perspective culture editor Jonelle Marin saw a military truck inside their campus. Then on September 8, 2009, Acuña saw another group of military officers going towards the College of Forestry and Natural Resources building.

An Attack on Student Organizations

Acuña of Perspective told Bulatlat that he feels threatened by the presence of soldiers inside the school. “Once I went to the canteen to find a group of armed military officers eating. I noticed that one of them was staring at me,” he said, “Later on, all of the military officers in that table were already staring at me.”