MANILA — “Bold yet wearable,” this is how the creations for Gabriela’s satirical fashion show is best described.

The satirical fashion show called the Project RunAway: The Election Season Collection will showcase “the masterfully crafted costumes and attires made from the simplest of materials to mirror a host of social issues and concerns ranging from poverty, press freedom, and good governance to human rights, social justice, and the national patrimony.”

Members of the press were given a first peek of the creations featuring two of its designs, as a kick-off to the April 30 fashion show. 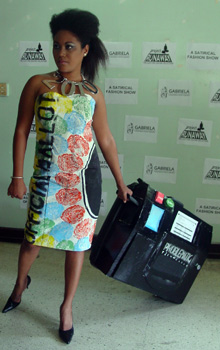 One of the creations showed was called “Diana Ross”, a fierce yet chic creation alluding to the 2010 elections. Diana Ross is a white tube dress made from katya (coco cloth) designed as a sample ballot, a 2010 necklace and a Precinct Count Optical Scan (PCOS) machine bag. In gay language, “Diana” refers to cheating.

Lana Linaban, secretary-general of Gabriela, said Diana would be a fad this coming May 10 elections. “There would be a comeback of massive fraud and manipulations,” said Linaban.  She cited the re-assignment of Commission on Elections (Comelec) Commissioner Ray Sumalipao, one of the so-called “Garci boys”, as the regional director of Southern Mindanao. The “Hello Garci” scandal during the 2004 presidential elections put Mrs. Gloria Macapagal-Arroyo’s victory against then rival Fernando Poe Jr. into question.

The second creation is called “Cheap Justice”, a “gangster look” alluding to the controversy over the insistence of Malacanang that Pres. Goria Macapagal-Arroyo could appoint the next chief justice of the Supreme Court despite the constitutional ban on appointments during a 90-day period beginning two months before election day and until the terms of current elected officials expire. Cheap Justice is a black robe worn over a white shirt hand-painted with the silhouette of the president on the run. 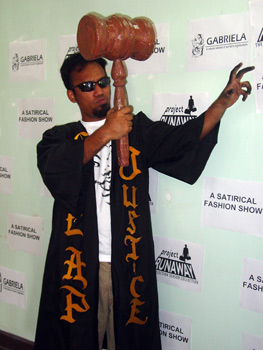 Both creations will hit the runway together with other creations on April 30, at the Mowelfund Film Institute, Quezon City. Linaban said the audience could expect creations that are hard-hitting yet stylish “because this should be the fashion statement of the current times that will hopefully help Filipino voters to determine who’s in and who’s out on May 10.”