Alliance for the Environment Pushes for Six-point Agenda

MANILA — Formed in 2004, the Envi Vote Alliance laid out the “positions and demands of environmentalists and the basic sectors on the most pressing issues affecting the people and the environment.”

Respect for the “Rights of the Natural Nurturers of the Earth.”

The alliance said that with less than 20 percent of the country’s forests remaining, commercial logging should be banned through the cancellation of corporate permits under Timber Licensing Agreements (TLA) and Integrated Forest Management Agreements (IFMA) until sufficient rainforest cover for the country has been regained. 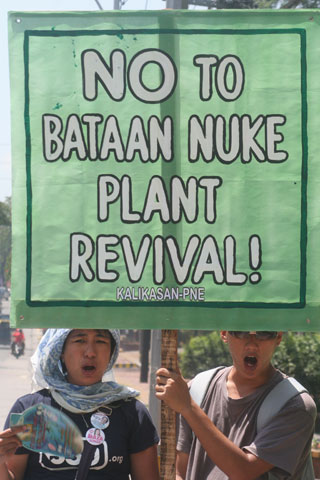 They are pushing for a genuine program to rehabilitate, reforest and protect watershed and forest areas. This program, the alliance said, should encourage the use of indigenous tree species in stead of the fast growing trees commonly-being used in reforestation programs. An ample amount of budget, they said, must be allocated for the reforestation program with the implementation and output monitored, validated, verified and managed by communities and people’s organizations.

The groups also called for the scrapping of the National Integrated Protected Area System (NIPAS) Act and other supposedly ‘environmental laws and programs’ that, in reality, “displace local communities and allow big businesses to control and own these resources.” The country’s flora and fauna should not be appropriated by private and foreign corporations through patents and licenses allowed under intellectual property conservation and laws like the Philippine Variety Protection Act, they said. A ban on illegal wildlife trade and biopiracy should also be strictly enforced for the conservation of Philippine biodiversity.

They also called for justice, compensation and remediation to victims of environmental destruction and government neglect such as the Aurora-Quezon landslide, Payatas garbage-slide, St. Bernard landslide, US military bases’ toxic waste and the Marcopper mine tailings spill.

Toward an Independent and Self-reliant Economy.

The group called for the junking of the the Japan-Philippines Economic Partnership Agreement and other unequal trade agreements. They are calling for independent and patriotic policies to address the country’s concerns such as foreign debt, international trade and foreign affairs.

They said a genuine program for distribution of land to the tillers, combined with full agrarian support services, has to be implemented. Sustainable agriculture must be promoted to meet the goals of food security and lessen the dependence on chemical inputs and technologies. The alliance is also calling for a ban on land-use conversion.

“Laws that allow foreign ownership of land and the shifting of land areas to uses that cater to foreign interests such as the Biofuel Act of 2007 that promotes massive biofuel production in the country to the detriment of food production should be repealed,” they said.

The groups are also promoting the judicious use of land, minerals, water resources, flora and fauna for the people’s benefit and to contribute to the nation’s progress.

“Exporting cheap raw materials for the world market should be stopped. The mining industry should not remain stuck in basic mineral production and semi-processing of metals, but should be developed to produce metal fabricating industries for the production of tools, equipments, and machineries, which are necessary to industrialization. Stop the policy of liberalizing the mining industry and oppose the Mining Revitalization Program and repeal the Philippine Mining Act of 1995,” said the Envi Vote Alliance. 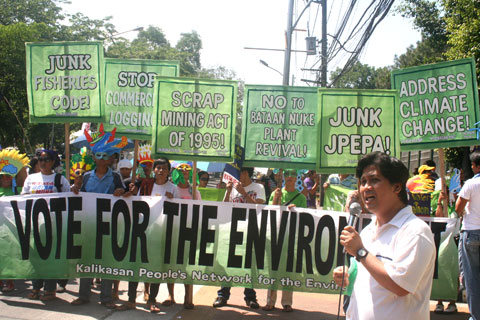 The alliance further said the government should legislate laws that will utilize the country’s resources and develop the mining industry for the benefit of the country. They also called for putting a stop to the 72 priority large-scale mining projects of the Arroyo administration particularly the mining operation of LG Collins Polymetallic mining project in Rapu-Rapu, Albay, Oceana Copper-Gold Mining project in Didipio, Nueva Vizcaya and the Toronto Ventures Inc. Gold Mining Project in Siocon, Zamboanga del Norte, which have caused so much devastation.

The alliance said the Electric Power Industry Reform Act of 2001 (EPIRA) and Philippine Water Crisis Act of 1995 and other acts that promote the liberalization and privatization of other natural resources should be immediately repealed.