MANILA — Despite a court order issued yesterday, the Armed Forces of the Philippines (AFP) still has not transferred custody of the 43 health workers to Camp Crame.

The Regional Trial Court (RTC) Branch 78 in Morong recently denied the motion for reconsideration filed by the Philippine National Police (PNP) and reiterated its order dated April 7 for the transfer of the Morong 43 to Camp Crame’s Custodial Center, a police detention facility.

On April 8, the Morong 43 were taken to Camp Crame but were not accepted by the PNP, citing the problem of overcrowding. The detainees were then sent back to Camp Capinpin in Tanay, Rizal where they have been staying since their arrest on Feb. 6.

The court cited the April 17 transfer of 47 policemen implicated in the Ampatuan massacre from Camp Crame to Camp Bagong Diwa in Taguig, Bicutan as basis for the transfer of Morong detainees to Camp Crame.

Relatives of the Morong 43 went to Camp Crame this morning, hoping to see their loved ones. They never came. Maj. Gen. Jorge Segovia, commander of the 2nd Infantry Division of the Philippine Army told the legal counsels of the Morong 43 that he has yet to coordinate with Lt. Col. Cristobal Zaragoza, the custodian of the Morong 43.

Julius Garcia Matibag, one of the legal counsels of the Morong 43 and spokesperson of the National Union of People’s Lawyers (NUPL), said that the court order is immediately executory.

“They have to comply,” Matibag said, referring to the AFP and PNP. “Any non-compliance [to the order] without a TRO [temporary restraining order from a higher court] is contemptuous,” he added. Matibag explained that both the AFP and PNP may be cited for indirect contempt for “willfully disobeying the court order” and may be penalized with imprisonment and a fine.

“As of now, they are already liable for contempt,” Matibag said. 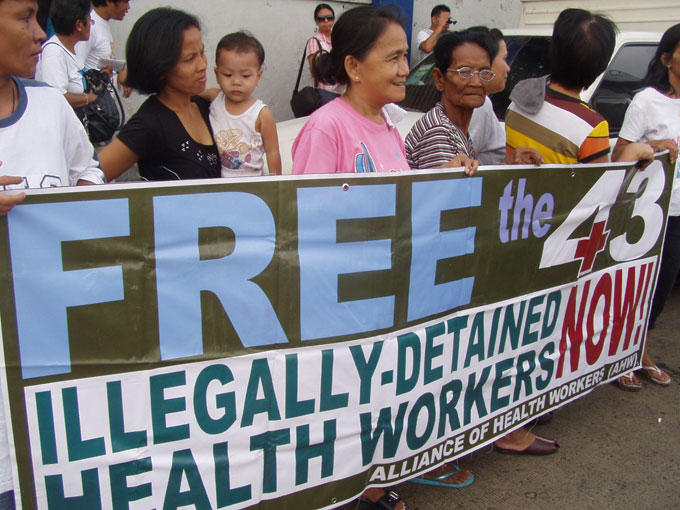 Relatives of the Morong 43 wait for the arrival of their loved ones at Camp Crame. The military, however, did not transfer the health workers today. (Photos by Angelica de Lara / bulatlat.com)

The only way that the PNP may obstruct the order to transfer the Morong 43, said Matibag, is to secure a temporary restraining order (TRO) from a higher court. Then again, Matibag said, the PNP has to prove that the RTC committed a grave abuse of discretion. “We are confident that the PNP would not be able to attain a TRO,” he said.

“If the two biggest groups of state security forces cannot effectively carry out a simple transfer of custody, they are either shamelessly incompetent or arrogantly making a mockery of the judicial process,” Dr. Geneve Rivera, secretary general of the Health Alliance for Democracy (Head), said.

Dr. Julie Caguiat, spokesperson of the Free the 43 Health Workers! Alliance said it is important that the health workers be out of military custody because the latter, she said, has no respect for human rights. 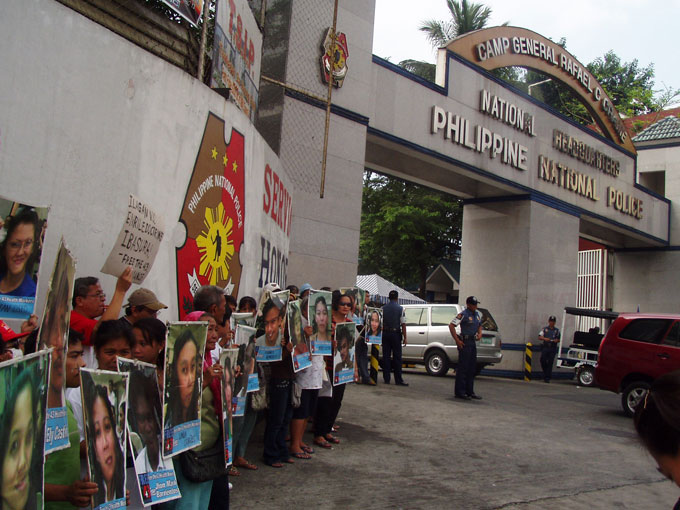 Rules of court state that detainees must be brought to a police detention facility.

“This is just part of their delaying tactics,” said Madona Apain, aunt of government nurse Garry Liberal. Apain said the AFP only wants the 43 to stay at Camp Capinpin to be able to force more detainees to turn into state witnesses.

Apain said they would continue with their fasting until the Morong 43 are transferred to Camp Crame.

Moreover, Matibag scored the TRO issued by the Court of Appeals (CA) 7th Division in favor of the petition filed by Judge Cesar Mangrobang and lawyer Cyrus Jurado.

Mangrobang is the judge who issued the search warrant for the Feb. 6 raid. Jurado claims to represent the five detainees who were separated from the rest of the Morong 43. Both filed separate petitions asking the CA to order the Commission on Human Rights (CHR) to stop it hearings on the complaint filed by Morong 43.

“We humbly submit that the CA 7th Division committed a reversible error by issuing that TRO. The TRO is assailing the Constitution itself and absent of any legal wisdom,” Matibag said. 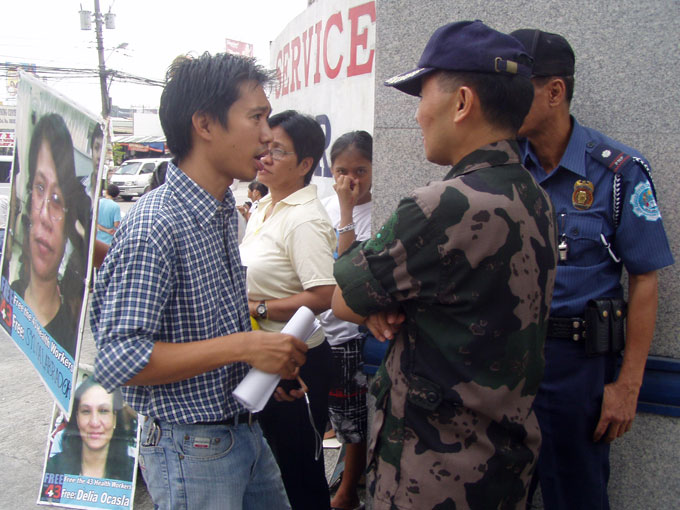 Matibag said they will file disbarment charges against Jurado and Hilda Sacay-Clave, another lawyer who claims to represent the five detainees, before the Integrated Bar of the Philippines (IBP). He cited as grounds the unethical practice of law and violation of the right to an independent counsel of the accused. “They were hired by the military,” Matibag said.

As for Mangrobang, Matibag said they will file before the Office of the Court Administrator gross ignorance of the law for issuing a ‘patently defective warrant.’ (Bulatlat.com)