The Haute Couture as Mirror of Burning Issues of the Time

MANILA — Just before the May 10 automated national and local elections take place, women’s group Gabriela would “provide a welcome respite to the increasingly personal insult-based electoral campaign by returning its focus on people’s issues and concerns through a creatively humorous but politically sharp fashion extravaganza.”

Lana Linaban, secretary general of Gabriela, Project Runaway is a sequel to their successful 2000 Passion/Fashion Show that focused on the issues and problems that beset the administration of the deposed President Joseph Estrada. 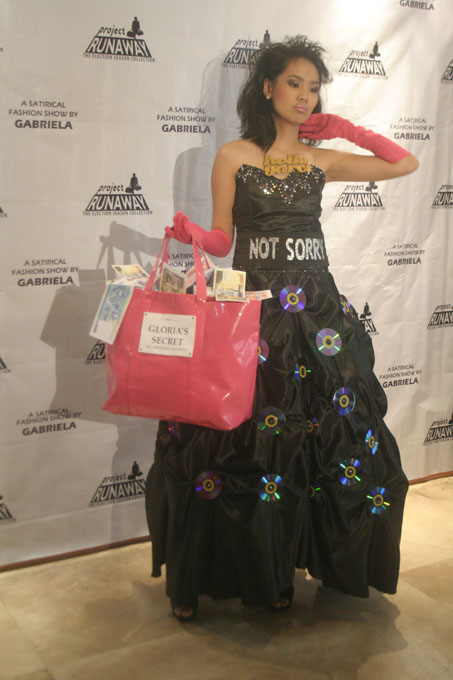 The gown on fraud is a voluminous black gown attached with compact discs. The gown was modeled with a belt bearing the words “Not Sorry,” and a necklace from which the infamous phrase “Hello Garci” hang. The 30-piece haute couture will be presented on April 30 at the Mowelfund Film Institute.

Gabriela revealed four of its creations under the “Fall Collection” in a press conference held April 24. These gowns alluded to issues of poverty, fraud, press freedom and forced migration.

The gown on poverty is made of coco cloth, embellished with the simplest materials like bottle crowns, sardine cans and plastic bottles. According to the designers, the materials used for this gown are junk items from which impoverished Filipinos source out their means of living. Gabriela said that this gown will be worn by a known urban poor leader Carmen Deunida of Kalipunan ng Damayang Mahihirap (Kadamay).

The gown on forced migration is about the sorry plight of Filipino migrants. The model wears below-the-knee dress composed of layers of flags of different countries, complete with white gloves and white stockings like those of a nurse. 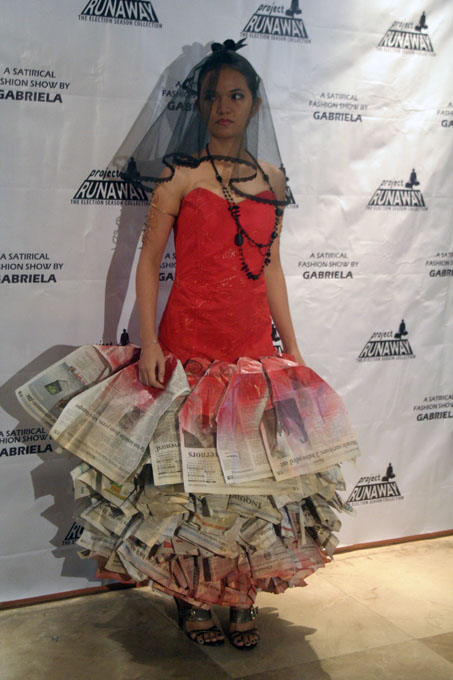 The gown on press freedom is a red couture embellished with newspapers to depict the travails suffered by the media and the ever ominous threat to press freedom.

Linaban said that these gowns demonstrate the bases for the people’s outrage over the Arroyo government and mirror the fall of Arroyo’s trust rating.” She also said at it is the people’s issues that should be projected and not the mudslinging of politicians.

Orteza also said the media is only focusing on the candidates’ issues and sorties but “there are many issues that have to be confronted.” Orteza hopes that the fashion show will somehow catch the interest of people and the media. She also said that it is the responsibility of artists to put the message across. Orteza will also hit the runway as one of the models.

Max Santiago, spokesperson of the Ugat Lahi Artist Collective said that the event is extraordinary because the political statement is coursed through a fashion statement.

Every year, Santiago’s group Ugat Lahi creates the effigies used for the State of the Nation Address (Sona) protests.