MANILA — By around 7:00 p.m., election precincts have been closed and the first eight copies of official returns were being printed at the Quezon City High School, Shortly afterwards, the Board of Elections Inspectors were able to transmit the results of the elections in 1-2 minutes. But reports from far-off provinces speak of a different story. 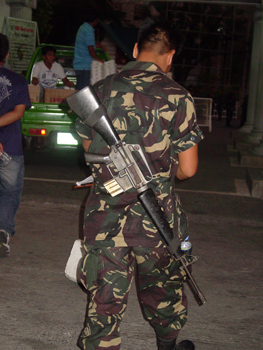 In Fort Del Pilar, also in Baguio, poll watchers were surprised when a brownout occurred at around 8:00 p.m. They had only one modem to transmit the results for six precincts.

In some precincts in San Juan, La Union, BEIs were not able to transmit the election results. They were advised to bring the PCOS machines to the canvassing center.

According to the Parish Pastoral Council for Responsible Voting, 1,467 out of 76,475 precincts have transmitted their results as of 8:21 p.m.

The presence of soldiers inside polling precincts were reported in various places such as Sacritan and Sto. Tomas in Pinili, Ilocos Norte, Babag Elementary School in Lapulapu City, Cebu. They were reportedly intimidating voters. The soldiers left only when representatives from Pagbabago! People’s Movement for Change told them that they could not stay there.

The Parish Pastoral Council for Responsible Voting also reported to the People’s International Observers Mission the presence of armed men near the precincts in Bangued, Abra. Abra is one of the election hot spots in the country. Sixteen percent of election-related killings in the country occurred in Abra. The PPCRV said that while there were less killings this year compared to the past, many harassment cases were reported. One voter was reportedly threatened that he will not be able to avail of a livelihood program if a certain candidate loses. 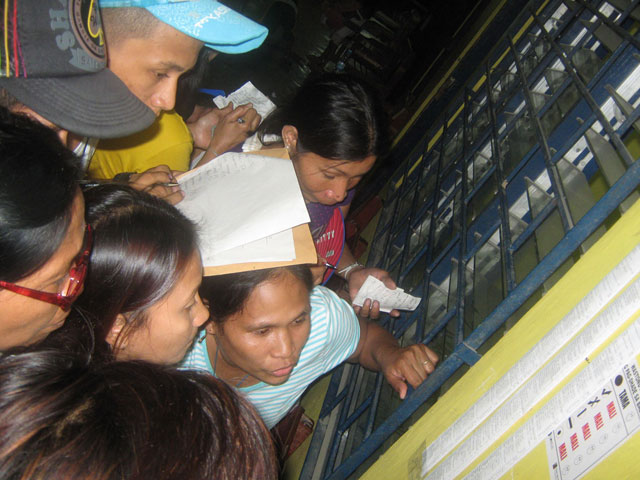 Cases of vote buying were also reported. At the Central Elementary School in Tarlac, where Liberal Party presidential bet Benigno “Noynoy” Aquino Jr. voted, a man was accosted for allegedly giving out P500 and t-shirts inside the precinct. In Malibcong, Abra, P5,000 and a sack of rice were reportedly being given to voters.

At the E. Jacinto Elementary School in Tondo, poll watchers were seen wearing t-shirts bearing the names of Noynoy Aquino, Mar Roxas, Manny Villar and Kaagapay Partylist. In Pasay City poll watchers were using fans and wearing t-shirts with the name of Connie Dy, a candidate running for mayor, printed on it. A voter tried to lodge a complaint with a Comelec representative who replied that there was no one who could receive the complaint.

More technical glitches were reported. According to Pagbabago! PCOS machines malfunctioned in Oslob, Argao, Mandaue, Consolacion and other precincts in Cebu City. There were reports that three PCOS machines at Vicente Lim Elementary School in Tondo, Manila malfunctioned. Only one Smartmatic technician was assigned for all the precincts. (Bulatlat.com)