BULDON, Maguindanao — Voting on Monday in the southern Philippine region of Mindanao, as well as other provinces elsewhere, was marked by computer glitches, disorderly conduct, vote buying, and violence.

In Maguindanao, one of the most violent provinces during elections, bombings and firefights were reported in several areas. In Kabuntalan town, two people died after supporters of two candidates for vice mayor engaged in a firefight, according to Major Randolph Cabangbang, a spokesman for the Army in Mindanao. Election officials decided to suspend the voting due to the incident. In Datu Salibo town, voting was also suspended after somebody lobbed grenades near a police station.

In Buldon town, a usual site of firefights between government and Islamic rebels, gunfire’s startled voters lining up outside the local elementary school. It turned out that two men had a scuffle inside one of the voting precincts, toppling the PCOS machines used in the voting. A soldier was forced to fire his weapon to tear the two apart.

Two hours into the voting at the Buldon Elementary School, at least three more fisticuffs ensued as people crowded the doors, jostling for position, banging the doors and walls of the rooms and demanding to be let in. Election officials insisted that only 10 voters at a time could enter.

In another precinct, people were shoving each other, banging on the doors, and were shouting things that were difficult to understand. Suddenly, a young man in red shirt raised his right arm and smacked a guy beside him. Pandemonium ensued. A woman rushed to the road outside the campus and shouted “Pulis! Pulis!” The soldiers came, the scuffle stopped, and things went back to normal.

In one precinct for the village called Piers, soldiers had to come in and, at gunpoint, drove the voters out of the room, where election officials and volunteers were sweating profusely because of the lack of ventilation. “They all wanted to vote at once. It’s crazy,” said Zacaria Ayunan, a pollwatcher for the Parish Council for Responsible Voting, wiping the sweat of his brow. There were about 700 voters registered in this precinct, Ayunan said, and two hours after the polls opened at 7 am, only 20 had managed to cast their ballots. “We’re going to be here forever if order is not restored,” he said. 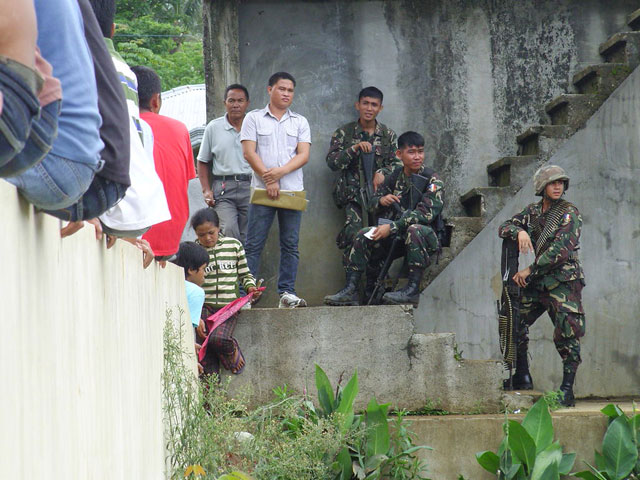 Buldon was crawling with soldiers on Monday. Their presence was needed because of the disorderly conduct of the voting. In practically all the precincts, voters crowded the door, shoving each other, banging their fists on the wall. They wanted to enter all at once, to the consternation of the BEIs. (Photo by Carlos H. Conde / bulatlat.com)

Kabiba Tomawis, 40, had lined up as early as six in the morning Monday. When voters were becoming impatient, she joined in the chorus demanding the voting to speed up. “It’s chaotic but it’s fun,” she said.

Buldon is a known bailiwick of the Moro Islamic Liberation Front and it is near the Camp Abubakar, the rebel’s former stronghold. It is the site of many fightings in the past.

In Zamboanga Sibugay province, also in Mindanao, three people died and several others wounded when supporters of opposing candidates clashed, the army said.

In Lanao del Sur province, just north of Maguindanao, local election officials declared a failure of elections in four towns due to the security situation. Over the weekend, firefights were reported to have occurred in these towns.

The military reported that two died in Lanao del Sur province on Monday after gunmen fired at a queue of voters in a town called Tugaya.

The National Union of Journalists of the Philippines, meanwhile, reported that a candidate for mayor in Davao del Sur province, in Mindanao, threatened to kill Orlando Dinoy, a reporter for the Philippine Daily Inquirer. The group said it has monitored an increasing incident of harassment against journalists.

On the eve of the elections, an explosion in Pikit, North Cotabato, killed at least one person on Sunday evening, critically wounded three and injured six others, residents and an official of an election watchdog said.

The victims had just finished their evening prayers inside a mosque when somebody lobbed what may have been a grenade, according to resident Arden Andong, who spoke by telephone from his home in Pikit town, North Cotabato, which is just 300 meters from the mosque.