DAVAO CITY — The proclamation of winners was stalled here on May 11, pending the arrival of results from the remaining seven polling clusters in the districts of Paquibato, Tugbok and Agdao.

But as of 6 pm on May 12, while still awaiting the election results from the last seven cluster of precincts, the City Board of Canvassers proclaimed Sara Duterte as the new Davao City mayor, Rodrigo Duterte, as vice mayor, Karlo Nograles as the winning representative in the first district, Mylene Garcia in the second district and Isidro Ungab in the third district.

The City Board of Canvassers lowered the threshold of votes necessary for the winning candidates to be proclaimed winners. The Board proclaimed the winners five hours after it resumed counting of votes on Wednesday, May 12.

Cullo said the Comelec will resume the counting of votes from barangay Tapak, sitio (subvillages) Labo and Butay in Paquibato District, Biao in Guianga, Tugbok District and San Juan in Agdao, still being awaited in the previous night.

The progress of canvassing had reached 98 percent in the city when it was snagged by problems over the defective flashcard coming from Mapula, Paquibato, among others.

The flash card from Mapula failed to function when entered into the Precinct Count Optical Scanning (PCOS) at the SP session hall canvassing area.

The teachers brought the flashcard by hand to the City Board of Canvassers all the way from Mapula, a farflung village in the city.

Canvassing officers suspected that the flash card might have been destroyed when the electricity went out in Mapula area earlier in the day.

But the PCOS machine counter said that files in the primary card and the back up did not match.

PDP-Laban and Liberal Party Lawyer Martin Delgra interjected a proposal made by the Consolidation and Canvassing System (CCS) laptop operator Arnel Rodriguez to declare a two-hour recess to fix the flashcard from Mapula. 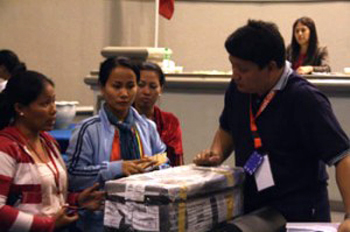 Teachers from Mapula in Paquibato confer with the CCS laptop operator on the status of the compact flash card in their precinct cluster. (Photo by Jose Hernani / Davao Today / bulatlat.com)

Rodriguez had told the election canvassers during the floor deliberation that to fix the flashcard, “it must be replaced with a preconfigured card,” and the only person who could do it was the IT personnel based in Digos, Davao del Sur.

“What about the back-up system of the PCOS machine?” Delgra asked. “Maybe we can check it first,” he told Rodriguez.

But the CCS laptop operator said the back-up card was found out to have the same problem with the primary memory card.

“If a back-up system is like a spare tire, then with what you said, it does not make any sense to call it a spare one at all,” the lawyer told the CCS operator. 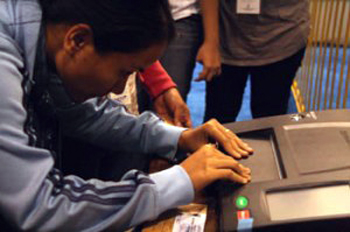 A teacher inserts what they believe is a defective compact flashcard into a PCOS machine at the canvassing area. (Photo by Jose Hernani / Davao Today / bulatlat.com)

The CCS laptop operator told Delgra to better direct his question to Smartmatic, the technology provider for the country’s first automated election system.

City Board of Canvassers Chair Danilo Cullo who presided the canvassing however announced that Comelec regional director Ray Sumalipao had just said there was no need anymore to transmit the flash card to Digos because the IT person can just send the password.

With Sumalipao’s word, the issue was put to rest and the proposal for a two-hour break, called off.

A brief recess was then declared.