Jim Gales And The Persecution of the Philippine Left

Against these backdrop, Bayan Muna, managed to retain their positions in the 2004 elections.

From three representatives of the Philippine Left in the 12th Congress, three more were added during the 13th Congress, with the entry of Gabriela Women’s Party and Anakpawis, representing the workers. Along with these, the killings and other acts of repression continued.

The administration withheld the Countrywide Development Fund (CDF) or pork barrel from the progressive partylist representatives.Ocampo said Bayan Muna, Gabriela and Anakpawis have not received their share of the CDF since 2005 when progressive partylist groups campaigned to oust President Arroyo following the discovery of her alleged involvement in massive cheating in the 2004 polls, also known as the “Hello Garci scandal.”

Despite this, Ocampo said the progressive partylists never waiver in their role in the elite-dominated Congress as watchdogs for good governance and as the voice of the underrepresented sectors.

In the 2007 elections, the Philippine left still managed to retain their seats in Congress.

When the Supreme Court declared in April 2009 that partylist groups who won less than two percent could take a seat in Congress, representatives from the youth partylist group Kabataan and Anakpawis added two more seats for the Philippine Left in Congress.

From 2001 to 2010 under the Arroyo presidency, 142 members of Bayan Muna were killed and twelve became victims of enforced disappearances, according to reports gathered by human rights group Karapatan.

In the same period, 49 members of Anakpawis Partylist were slain, while two from Gabriela and two Kabataan Partylist members were victims of targeted killings. 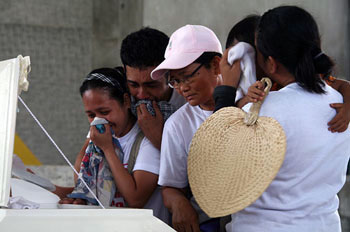 Families and friends grieve over the killing of Jim Gales, a young volunteer of Bayan Muna. Even with the measly sum that Jim received from his volunteer work, he had always set aside something for his family each month. He was the eldest in the family. In his death, he left behind six younger siblings. (davaotoday.com photo by Jose Hernani)

Over DXAB radio in Davao on May 27, Armed Forces of the Philippines (AFP) 1003rd Brigade Commander General Eduardo Del Rosario attributed the decline of votes in the partylist groups to the efforts of their troops.nMembers of the Philippine Army did the rounds in the last elections, telling people not to vote for progressive partylist groups because they are “fronts of communists.”

Some groups reported outright intimidation and harassment of campaigners of these progressive groups.

In Baganga, Davao Oriental, campaigners of progressive partylist groups said they were forced by members of the Philippine Army to join the pulong-pulong or community gatherings. Peasant leader Antonina Piamonte said soldiers threatened her in one of these community gatherings.

Eleven political activists were killed in Southern Mindanao in 2009. The eleven victims were members of political organizations that the military branded as “fronts” of the New People’s Army (NPA).

“We will bury another colleague, not knowing the full identity of his killers,” said Ariel Casilao, regional coordinator of Bayan Muna. “But his killing is no different from those of our colleagues from Bayan Muna, Gabriela, Anakpawis and Kabataan falling in the hands of this fascist government.”

Gales was remembered as an ardent “organizer” and an “affectionate colleague.”

“Is it a crime to struggle for what most people need?” cried out Jim’s younger brother, who described Jim as the dependable eldest sibling, a simple man and a principled one, never known to have enemies.

Hundreds of members of progressive partylist groups and organizations accompanied the funeral march for Gales on May 28, nine days after his brutal death.

At 32, Gales was the 117th victim of targeted killings of activists in Southern Mindanao since President Arroyo took power. (Cheryll D. Fiel/davaotoday.com)