You Are Here: Home → 2010 → June → 26 → OFW Advised to Jump from Building Instead of Being Provided with Assistance by the Philippine Embassy

MANILA – Merlinda Aquino, 40, has been contacting the Philippine embassy in Riyadh for help. She wanted to escape from her project manager who has been verbally abusing her and return home to the Philippines. But instead of a rescue plan, Welfare Officer Nestor Burayag gave Aquino a choice between enduring her oppressive situation or risking her life.

“It was not sarcastic. It appeared to me that he really wanted me to jump off from the 3rd floor of our villa,” Aquino told Bulatlat.

While Aquino had worked abroad before, this is the first time that she needed the help of the Philippine government. In 1994, she went to Macau to work for a coffee shop that her sister owned. Later, she worked for another restaurant, also in Macau, as a waitress, where she earned as much as P18,000 ( $681 at the 1994 exchange rate of $1=P26.417) a month.

“It was a beautiful experience,” Aquino said. In fact, she was very proud that it was through her work experience in Macau that she learned how to speak in english. But sometime in 2000, she decided to go back to the Philippines to attend to her two children who were having problems at that time and to her marriage that had already fallen apart.

She then opened a variety store, with her new partner Andy. But as years went on, she felt that it was high time that she started earning a decent income again, saying that she was not comfortable asking Andy for money to support her first two children.

Early 2005, she applied for overseas work at the Placewell Recruitment Agency, where she paid a total of P28,000 ($508 at the 2005 exchange rate of $1=P55.08), which included her placement and medical fees. The salary stipulated in the work contract she signed in the country amounted to 800 riyals, including her food allowance. While her salary may seem low, Aquino was optimistic that it was worth the sacrifice because they were promised that they could work overtime with pay.

But upon arriving in Saudi in March 10, 2005, she learned that her salary was further reduced to 660 riyals, including food allowance, and that they were not entitled to overtime pay. 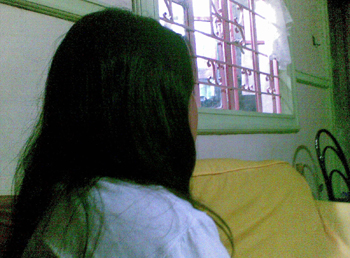 Merlinda Aquino was given a choice by the welfare officer of the Philippine embassy in Riyadh to either endure the abuses of her employer or to just jump off from the 3rd floor of their villa. (Photo by Janess Ann J. Ellao/bulatlat.com)

Aquino did not know that she was employed under Service King Ornascom, a sister company of the Annasban Group. The Annasban group is one of the leading providers of manpower services in Saudi Arabia. In November 25, 2005, the Philippine Overseas Employment Agency banned the said company from employing Filipinos after receiving numerous complaints about the unfair practices of Annasban. But the recruitment ban was lifted on August 21, 2008 after Labor Attache Rustico dela Fuente reported that Annasban has reformed its ways of dealing with migrant workers.

Obviously, it was not the case. In fact, Aquino, just like other victims of Annasban, endured the low salary, lack of opportunities for overtime work and maltreatment from their project managers.

Aquino worked for a hospital in Abha as a caregiver to children with disabilities. After that, she was transferred from one working site to another, working as a cleaner in a local jail and and a caregiver at Enath Markaz Rehabilitation Hospital. She worked for three years. But on June 20, 2008, she decided to stop working because her work contract had already expired in March.

However, she was sent to another work site, the Kingdom Hospital, to work as a cleaner. She was promised that she would only work for a month as a reliever to a migrant worker who was on vacation. She was also told by her project manager that after a month, she would be given a choice between an exit or re-entry visa.

On March 16, 2009, she again negotiated with her project manager if she could go home for a month-long vacation. The project manager agreed but forced her to sign a blank paper. The project manager also promised her that should she come back to work after the vacation, her salary would be increased by 100 riyals. Then, in April 27, she finally arrived in the country, after more than a year of waiting to be sent back home.

“But I was surprised that my settlement fee was only 132 riyals,” Aquino said, attributing it to the blank paper that she was forced to sign before she left. This motivated her go back to Saudi in July 10, 2009. “Merely accepting the 132 riyals would put all my sacrifices for four years in vain.”

Aquino went back to work, with the same salary but without a signed contract. She frequently visited her project manager’s office to follow up on her request for a higher settlement fee. “I was told that I had too many questions,” she said.