KMU urged the president-elect to give workers’ demands a hearing to “at least balance his dialogues with big business groups and foreign chambers of commerce.”

“The president-elect has been talking continuously with big business. He will get a warped sense of the labor sector’s situation if he does not balance that with dialogues with genuine representatives of workers. He should give us a hearing, too. That would set him apart from his predecessor who is pro-business and anti-worker,” said Elmer ‘Bong’ Labog, chair of KMU.

Labog noted that Alberto Lim, president of the Makati Business Club, and Jose Rene Almendras, an Ayala Corporation executive— both known to be averse to wage hikes— are touted to be included in Aquino’s Cabinet.

Because the members of Aquino’s transition team and many among those rumored as being eyed for his cabinet are from the “economic and political elites of the country,” and “Noynoy himself is a member of that elite,” the KMU stressed that he ought to exert more efforts to find out and understand the working people’s situation and calls. 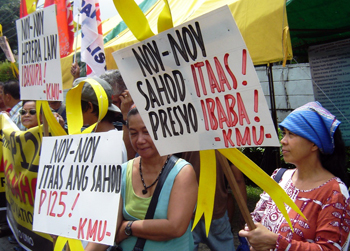 Leading these calls is the immediate need to legislate a P125 ($2.69 at the current exchange rate of $1=P46.44) across-the-board wage hike nationwide, which has been one of the group’s unmet demands for the past nine years now. KMU urged Aquino “to categorically mention a significant legislated wage increase” in his inauguration speech.

“We have had enough of Arroyo’s nine years of stagnant wages and rising prices,” said Labog. They decried the latest meager wage hike ordered by the wage board for the National Capital Region as too small to make up for the shrinkage of the workers’ purchasing power in the last decade.

The Filipinos’ real wages increased by a mere P5 ($0.107) to P242 ($5.21) in the national capital region from 2001 to today, according to Ibon, a non-profit economic think-tank. Despite the employed workers’ continued rise in productivity, and despite the continuous increases in corporate profits in the past years, the workers have been persistently denied their across-the-board wage hike demand in the past decade under the outgoing Arroyo regime.

The outgoing Arroyo has “exhausted the patience of workers with promises of paradise when all it gave us is hell,” the KMU said in a statement. As such, in Aquino’s inauguration speech, “Even a general promise that he is amenable to a legislated and substantial wage increase within the first year of his administration would be good enough news for the Filipino workers and people,” the group said while vainly waiting for Aquino at Times St.

Aside from wages, the labor group urged Aquino to heed the workers’ call for protection of labor rights and “reversal of contractualization policies.”

Because of the past governments’ efforts to attune the country’s labor policies to globalization, especially under the outgoing Arroyo government, labor rights and human rights of workers in the country have taken a severe beating over the past years. A high-level mission of the International Labor Organization had to fly to the country last year to investigate years-long and still piling up complaints of rights violations here, which include killings, disappearances and harassments of union leaders and activists, as well as unwritten no-union no-strike policy in economic zones. 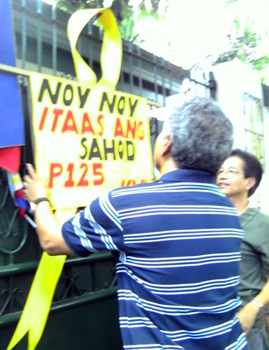 The desire for “labor flexibilization” schemes as demanded by globalization has also resulted in “jobs massacre” even in well-established, profitable firms. To make labor more flexible, that is, easier to hire and fire as needed, “regular” workers in the Philippines have been losing their security of tenure and its attendant benefits and protection as the past governments especially that of Arroyo have done their best to deregulate the labor market and strip off the protection of labor rights.

In a recent national consultation of unionists, Bong Labog estimated that more than 60 percent of the country’s laborers may already be under various “contractualization” schemes.

“More than four million Filipinos stand to welcome the Aquino administration without any job,” he added.

Thousands more of long-time employees of profitable companies such as Philippine Air Lines (PAL), ABS-CBN and Dole Philippines stand to further lose what remained as protection of their “regular” jobs to labor flexibilization schemes. PAL’s contracting out and outsourcing through a so-called spin-off, DolePhil’s employing thousands of agency-hired ‘contractuals’ and ABS-CBN’s so-called internal job market (IJM) are just some examples of employers’ flexibilization schemes.

“Justice has yet to be attained also for 98 trade-union leaders who were killed since 2001,” said Labog. He concluded that “All these form part of Arroyo’s ugly legacy for labor which Aquino should immediately reverse to achieve his promised ‘change.’” (Bulatlat.com)