“Aquino should lead the filing of cases against Arroyo and identified perpetrators,” Marie Hilao-Enriquez, Karapatan chairperson, said in a press conference June 29.

Based on Karapatan records, there were 1,206 victims of extrajudicial killings, 205 victims of enforced disappearance, hundreds illegally arrested and detained and more than a thousand victims of torture during the nine-year administration of Arroyo.

Enriquez called on Aquino to take a different path from that of her mother Corazon “Cory” Cojuangco Aquino who, Enriquez said, never initiated the prosecution of the crimes committed by the Marcoses during martial law. “It took the victims themselves to file a case against the Marcoses,” Enriquez, who was also a political prisoner during martial law, said.

The assassination of Cory’s husband and Noynoy’s father Benigno “Ninoy” Aquino Jr. was believed to be masterminded by then President Ferdinand Marcos.

“The [Aquino] government must initiate prosecution proceedings against Arroyo…[otherwise] impunity will continue. Impunity is the absence of accountability of government officials and state security forces for all the crimes they committed,” the human rights leader added.

Enriquez added that impunity would not end if no administration would take the cudgels for the victims and say no to human rights abuses. “We hope that Aquino will use the powers and resources of the state to punish the perpetrators.” 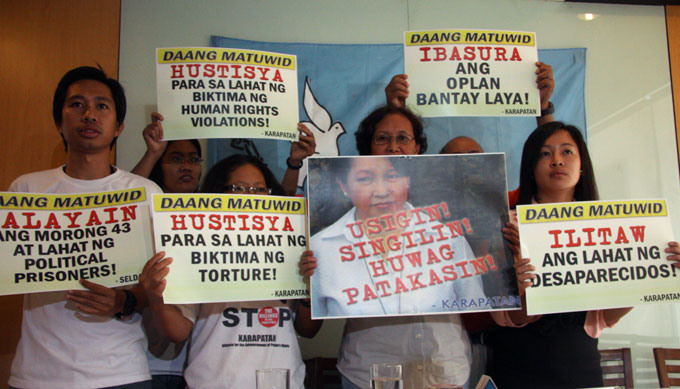 On June 30, 2010, as soon as Arroyo exits as the President of this Republic, Karapatan said it is ready with the lawsuits that they will file against her in Philippine courts.

Enriquez said they will also push for the revival of several cases against Arroyo and the military, particularly the twin murder of Eddie Gumanoy and Eden Marcellana, and the enforced disappearances of Jonas Burgos, Karen Empeno and Sherlyn Cadapan and Manuel Merino.

Karapatan also welcomed the appointment of Commission on Human Rights (CHR) chairwoman Leila de Lima as justice secretary. “As head of the DOJ [Department of Justice], she will have more powers to help the victims and to prosecute human rights violators,” Enriquez said.

In a webcast interview with Bulatlat and Kodao Productions, de Lima said the Commission on Human Rights is currently reviewing the cases of political prisoners and if she is appointed to the position of justice secretary, she would review all the cases filed against political activists.

No to Political Accommodation

Enriquez criticized Senator Edgardo Angara’s statement that going after Arroyo should not be the priority.

“The so-called reconciliation is actually political accommodation, which we don’t like. There is no forgiveness because no one asked for forgiveness. There was no admission of guilt. There is no closure,” Enriquez said, citing the Marcoses getting back to power. “Now, they act as if they did nothing wrong. This is alarming.”

Enriquez said the absence of punishment has also emboldened the military to commit more crimes. “They continue to bear the mentality that they can get away with anything they do,” she said.

Enriquez further said the people should not forget about what happened in the past. “They say we have to move on. Move on to where and what? We must not forget [their crimes.]”

Fr. Diony Cabillas, spokesperson of the Samahan ng Ex-Detainees Laban sa Detensyon at Para sa Amnestiya (Selda), said the Aquino government must hold the Marcoses and Arroyo accountable for the absence of justice for all the victims of martial law.

Cabillas said Arroyo proved to be an obstacle in the attainment of justice for martial law victims. “The ill-gotten wealth of the Marcoses which Selda and the victims persevered to take back had also been stolen by Arroyo,” Cabillas said, citing the fertilizer fund scam.

The P728-million fund was believed to be derived from the indemnification fund for martial law victims.