“You are my boss,” President Aquino said in his inauguration speech to the people who cheered for the change he promised as against the corrupt, abusive Arroyo regime. But for the hundreds of farmers from Central Luzon and Southern Tagalog who for the first time in this country’s history held a rally on the inauguration day itself of a new president, that applauded boss-thing has not materialized yet. For them, at least.

Now camping out at the historic Mendiola Bridge, the farmers’ groups have been repeatedly negotiating with the police to be able to stay there to continuously push their demands for land in the first 100 days of Aquino’s government.

The farmers braved the June 30 threat of rains and heat to bring to Aquino’s attention their most immediate demands, but they were not even met by at least one of Aquino’s staff when they first tried to cross the Mendiola Bridge to enter Malacañang and personally hand to Aquino and his cabinet, who were meeting there for the first time, the farmers’ proposed immediate solutions to poverty. 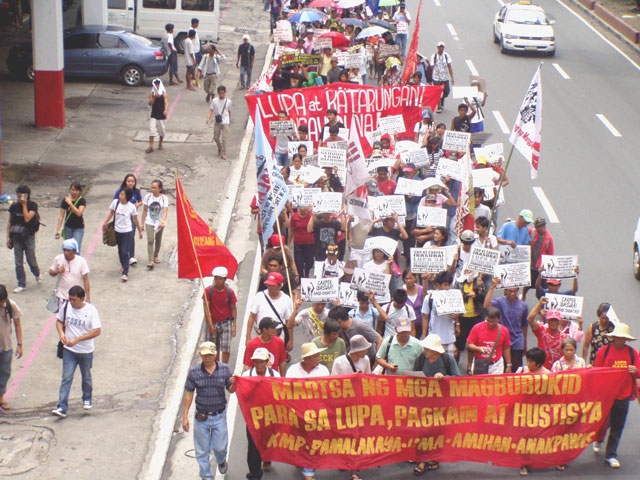 Peasants on the way to Mendiola on Aquino’s day 1 as president. (Photo by Angie de Lara / bulatlat.com)

Seven in every 10 Filipinos are farmers, the KMP (Peasant Movement of the Philippines) emphasized, which was why they had been trying to bring their demands right to the president himself. If there is to be change, a lot of it must happen on farmers’ lives, they said.

No Time To Waste

“Our need for change is so immediate that we cannot just wait and see,” said Danilo Ramos, secretary general of KMP, as he explained why they opted to hold a rally on the very first day of Aquino’s term. This rally is different, Ramos said, because aside from celebrating the final day of Gloria Arroyo’s presidency, they are marking Aquino’s first 100 days by giving him some suggested “doables” that would really change for the better the lives of Filipino farmers. 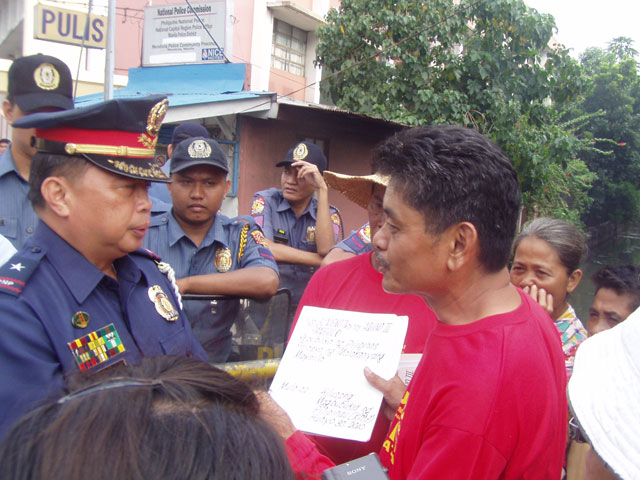 KMP’s Danilo Ramos shows the peasants’ immediate demands that they want to hand to President Aquino. 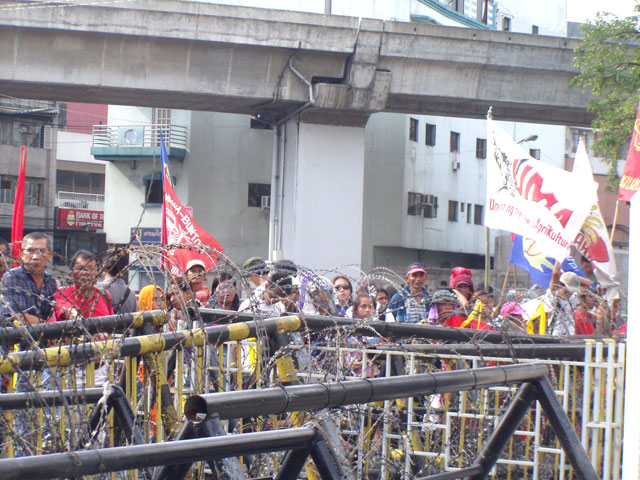 Hundreds of farmers from militarized communities in Southern Tagalog and Central Luzon merged under the banner of KMP at the Department of Agrarian Reform in Quezon City on the day of Aquino’s festive inauguration. From there, the farmers went alternately on caravan and on foot to Welcome Rotunda, where other peasants and workers from Cavite waited to join them, and then the group proceeded to Mendiola for a program and the hoped-for audience with Aquino as he took his first luncheon and held his Cabinet meeting at Malacañang.

Along the way, the farmers’ group passed by huge yellow banners bearing thank-you messages to former president Cory Cojuangco-Aquino and former senator Benigno Aquino, parents of new Philippine president Noynoy Aquino. The marching farmers came from disputed lands in Bulacan, Pampanga, Tarlac, Cavite, Rizal, Batangas and Laguna. Some of their groups have previously suffered injuries and harassments from state troops deployed in their area to help specific landlords grab or keep hold of huge landholdings. These landlords include those from the families of Araneta, Sy, Yulo, Villafuerte and Cojuangco-Aquino.

“We present to him a clear vision on how to take a straight path that leads to genuine change,” said Guillermo Bautista, chair of KASAMA-TK (Federation of Peasants Organizations in Souter Tagalog). They particularly urged the Aquino administration to “support the people’s agenda where, on the top of the list, is the distribution of land to farmers.”

“The rural poor have been fighting for land for centuries, will Noynoy be any different by distributing his own hacienda to the tillers?” asked Bautista.

“Last June 8, we brought to his residence the farmers’ long-term solutions to poverty,” said Danilo Ramos. On June 30, as Aquino was sworn in as president and started holding meetings and parties, the group asked Aquino to substantiate his promised change.

Among the first order of the day for Aquino is prosecuting Gloria Arroyo on her “numerous crimes and corruption cases to the people.” Noynoy’s promise that ‘There’d be no poor if there are no corrupt’ “should materialize with Arroyo going to jail, Guillermo Bautista of KASAMA-TK said, mentioning as examples of GMA’s corruption the P728 million ($15,686,274) fertilizer fund scam and her “last-minute stealing of the P1.7 billion ($36,630,036) El Niño fund.

While each farmers’ group has a big landlord to blame for their landlessness, poverty and harassment from state armed troops, most farmers’ leaders stressed that Noynoy Aquino should lead in the clearing of the Cojuangco-Aquino clan’s bloody record at the originally 6,453 hectare Hacienda Luisita in Tarlac. At the very least, said Bautista, “Noynoy should distribute his family’s hacienda to the local peasants as his first step to Daang Matwid (Righteous Road). “ (Bulatlat.com)