MANILA — In the afternoon of June 10, 2010, Ligaya Cruz was surprised to see soldiers outside her home in Barangay Puray, Rodriguez asking if they could stay in her house. The soldiers told Cruz they just came from an armed battle with members of the New People’s Army (NPA). Cruz said she had no inkling that after that day her family would no longer live in peace.

“My grandchildren were very afraid of them (the military). But I let them stay in one of our nipa huts,” Cruz tearfully said in a press briefing.

At around 11:00 p.m. of that night, Cruz narrated that she secured her eight grandchildren when she heard gunshots. Later, she learned that the military claimed some NPAs had tried to engage them in a gunfight. The NPA is the armed wing of the Communist Party of the Philippines (CPP).

But instead of going after the NPAs, the military went after Cruz’s family – specifically her two relatives Nardo and Carlito and her son Eddie. The military tied their hands and feet, then beat them up until the following morning.

The three were accused of being NPA supporters. But Cruz’s family denied the accusation. The next morning, Eddie was brought to a detachment of the 202nd Infantry Battalion in Baras, Rizal while Nardo and Carlito were allowed to leave. As of this writing, Eddie is still detained there.

Like most residents of Barangay Puray, Eddie, 27, is a peasant. He plants rice, corn and vegetables for a living. As he is not yet married, his elderly parents depend on his support. 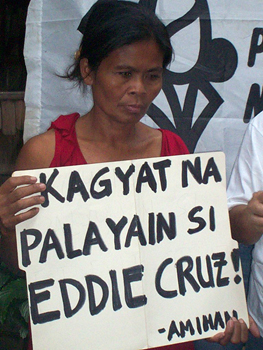 Cruz told Bulatlat they are going through a very hard time now that Eddie is being detained in a military camp. Aside from worrying for his safety, his family has nothing to eat because they depend solely on him.

Recently, Cruz said she was able to visit her son in the detachment. Eddie told her he was given a list of charges and asked to pick one that he liked, which would then be filed against him. He said he chose illegal possession of firearms because it was bailable. Unfortunately, his family could not afford to pay the bail.

That had been her last visit to Eddie, so far, because, she explained, they could no longer afford the fare going to the military camp.

Aside from the Cruz family, other families are also being affected by the militarization of their community. Salvador Sernechez, 37, a farmer from Barangay Mascap, said the armed fighting between the 16th IB and the NPA on June 10 happened near his home.

“I was away at the time, tending to my crops when I heard the gunshots,” Sernechez said. “I immediately ran to get my wife and children.”

At the same time, his wife who is seven-month pregnant then and his three children were already trying to escape the crossfire. As they fled, they fell into a deep ravine one at a time, walked for hours, trekked through the mountains and crossed rivers to finally reach the town proper of Rodriguez. They failed to bring any food with them.

“I searched for them and found them at a friend’s house,” Sernechez said, adding that his wife and children were bruised all over. After the incident, he was informed that a rebellion case would be filed against him for being a supporter of NPA.

Among their findings is the impact of the fire fight on children from families now staying in a relocation site. “Many children cry when they hear gunshots even if it is just coming from the television,” Sarah Espineda of CRC said.

Espineda said the displacement deeply affects the children. “They are forced to leave their own homes, not being able to play or eat.”
On Noynoy

At present, the families of Cruz and Sernechez have not yet returned to their homes, fearing the military might try to get back at them.

“This is the first time an abduction and torture took place in our community,” said Zen Soriano, the vice chair of Amihan National Federation of Peasant Women and a local organizer in Sitio Mascap in Rodriguez.

Amihan spokesperson Lita Mariano said these only prove that Oplan Bantay Laya (OBL) is not yet done targeting non-combatants. OBL is a counterinsurgency program implemented during the presidency of Gloria Macapagal-Arroyo.

Mariano urged President Benigno Aquino III to look into the problems and hardships they are going through in Rodriguez. “Free Eddie Cruz and pull-out the military detachment from our community,” Mariano said.

She added that they would file complaints before the courts and the Commission on Human Rights against the 16th IB for the human rights violations they committed against the Cruz family and the other victims. (Bulatlat.com)