A day before he left, Mark cuddled his mother asking if she loves him and if she would miss him while his gone. “I told him, no.” But Mark replied that he would miss her mother and that he loves her very much. Perlita said that when they brought Mark to the airport on April 4, she never thought that it would also be the last time that she would see her son, “full of dreams and full of life.”

“He never looked back to say goodbye,” she said.

Perlita said that the first time Mark called from UAE, he just kept on crying. “He did not even utter a single word. He just cried,” she said, adding that Alma had to get the phone, worried that they were wasting their cellphone load.

“I sent him a text message after that,” Perlita said, “I told him that he should have never asked me if I loved him. Because the answer is yes, and that there is nothing that could stop me from loving him.”

Soon, Mark was hired as an interior designer. He assured his family back home that he would work overtime to make sure that he would earn enough for their needs. But Mark had to leave UAE before his visit visa expired. One of the exit points, and nearest, was in Kish Island, in Iran. He left for Kish Island on June 11.

On July 1, around 8:00 p.m. in Manila time, Mark called Baican on the phone. He talked to his two sons. He also asked Thelma, one of Baican’s sisters from UAE who was in the Philippines at that time for a short vacation, to buy him a black shirt with the Philippine flag. “He probably watched (President Benigno Aquino) Noynoy’s inauguration and saw that shirt on television,” Perlita said.

Baican had no idea that only two hours since they talked, Mark would be killed. 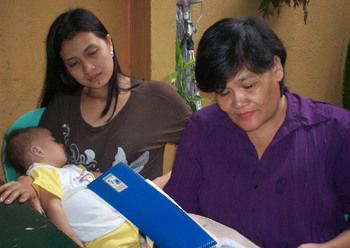 After the telephone call, Mark went down to the hotel’s lobby with his roommate to check if they already had a work permit from UAE. His roommate was so happy that he finally got his. And Mark too was excited because his visa would probably come very soon.

On their way up to their room, a Sudani national pushed Mark’s roommate. He hugged him and asked what his problem was and the Sudani started to challenge him to a fist fight. Mark was slapped several times by the Sudani.

“I reminded him before he left not to fight with anyone. But he must have been hurt when he was pushed to the wall. So he defended himself,” Perlita said. But the fist fight turned bloody when the Sudani was handed a nail cutter with a metal nail polisher at its end, which was used to stab him.

His roommates, unfortunately, could not bring Mark to a nearby hospital, which is only a 25-minute drive from the hotel, because only local authorities could do that. While his wound was only small, he lost a lot of blood. He lied on the floor, bleeding to death for almost two hours before the authorities came to bring him to the hospital.

“I was told that he kept calling my name, Baican’s and their two sons,” Perlita said crying, “But mama was not there to help him.”

Perlita said Mark also tried to stop the blood from flowing out of his body by pushing his hand against his chest. But the wound was deep. His suffering was caught on a CCTV camera. He died ten minutes after arriving in the hospital.

Their relative Leila Gonzaga, residing at Abu Dhabi, went to Kish Island to claim Mark’s remains. They were told that a relative should claim it or the local authorities would be forced to burn him.

“Leila saw him. He still had blood in his mouth but appeared as if he was sleeping soundly,” Perlita said. Leila stayed in Kish Island for five days. The local authorities there said that the Sudani national would be executed. One of the local authorities in Kish also offered blood money to Perlita but they said that they would leave it to the court to decide.

Since Perlita do not have money to pay for the expenses, she asked the help of Taguig Rep. Freddie Tinga to forward her concerns to President Benigno Aquino III. Tinga’s chief of staff Grace Pagkatipunan then wrote a letter addressed to Foreign secretary Alberto Romulo and undersecretary Esteban Conejos Jr. about the immediate repatriation of Mark’s remains.

Perlita went to the Department of Foreign Affairs office on July 8. “I could sense negative vibes in their office,” she said. Ariel Gatchalian, a DFA employee, received her letter addressed to the Foreign Affairs secretary. Perlita said Gatchalian even blamed his son, saying that this is what happens to Filipinos who insist on working abroad undocumented.

“But, in fairness, Ariel has a heart,” Perlita said because Gatchalian later on asked her to submit an affidavit of consent and an affidavit of undertaking for the autopsy and the repatriation of the remains.

The following day, Perlita received a letter from Migrante International, an OFW group, extending their condolences. Attached in the email was a letter written by the Philippine embassy in Tehran, addressed to the Asia Pacific Mission for Migrants, an affiliate of Migrante. The letter stipulates that embassy officials have already recommended to the DFA the provision of the repatriation fund for the deceased if the family could not afford the cost.

“It made my day brighter,” Perlita said.

On July 15, Perlita and Tinga’s chief of staff Pagkatipunan submitted all the necessary affidavits that the DFA asked from them. As of this writing, they are waiting for any notification on when Mark’s remains would arrive.

Perlita is trying her best not to look at Mark’s pictures. He is still very much alive in her eyes. If there is a lesson she learned from this experience, she said, it is to say ‘I love you’ as often as you can to the people you love. “Because once they are gone, no matter how many times you say it, they would no longer hear you.” (Bulatlat.com)