You Are Here: Home → 2010 → July → 24 → Two Women Political Prisoners During Martial Law Join Calls for Release of Two Pregnant Women of the Morong 43

MANILA – Professor Judy Taguiwalo of the University of the Philippines made an urgent appeal through Facebook on behalf of two women political detainees, from among the Morong 43, who are pregnant but still languishing in jail at Camp Bagong Diwa in Bicutan.

“As a former detainee during the Marcos years, I was aghast by their experience during the early days of their captivity. We join the call to have the two pregnant women political detainees released immediately for humanitarian reasons. This was done during the martial law years and I cannot see any reason why this cannot be done by the present government,” Taguiwalo said in her note posted at the social networking site.

Carina Oliveros, 27 would be giving birth to her first child any time soon. Mercy Castro, 26, would give birth to her second child in October. Both women are health workers from Central Luzon who were among those arrested in while conducting a health training in a farm house in Morong, Rizal on February 6.

Taguiwalo visited the two pregnant women in jail. “They do not even have a place to walk on. Their cell is congested and even the female quarters are also congested,” Taguiwalo told Bulatlat.

“Pregnant women who are not guilty of any crime do not belong in jail. These two pregnant women are health workers who serve the people,” Taguiwalo said.

Recalling Their Own Ordeal

Taguiwalo herself went through the same ordeal during martial law. Taguiwalo was already four months pregnant when she was arrested in1984. Although her pregnancy was not delicate, she could not eat properly then. 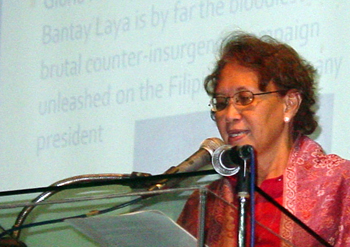 Marie Hilao-Enriquez, Karapatan chairperson, was among the first activists arrested in1974. Her husband was also arrested at that time. She was not yet pregnant at the time of her arrest. She joined the hunger strike for the release of two other women political prisoners who were pregnant. “We held the hunger strike while in detention in Fort Bonifacio. I collapsed because of that and then I discovered that I was also pregnant,” said Enriquez.

Both Taguiwalo and Enriquez underwent regular pre-natal check-up by the doctor in Camp Crame. They also took care of themselves; they walked inside the jail premises to have some exercise. Relatively, their situation inside jail then was different from the situation Oliveros and Castro are now in. Unlike them, Enriquez and Taguiwalo had more spacious cells.

Their needs such as vitamins and baby’s needs were provided by their relatives and other supporters. They were also provided with food to augment the jail rations. “The food inside the jail was not very good, so the political prisoners cooked their own food,” Taguiwalo related.

“The donations were centralized so that everybody had their share. The first ones who got their shares were the pregnant women and those who were sick,” Enriquez said.

Both Taguiwalo and Enriquez gave birth to healthy babies. They both delivered their babies at the Camp Crame Station Hospital. Unlike Taguiwalo who was accompanied by her mother, Enriquez was alone when she gave birth. Her husband was allowed to visit her but was not permitted to stay and take care of her while in the hospital.

Enriquez’s detention was more hostile. The commanding officer of the Constabulary Security Unit (CSU) threatened to take her baby away from her. Enriquez said, “They were scandalized because of the presence of my baby. The head of the CSU wants to give my baby to an orphanage, but I defiantly told him, ‘if you could do that to your own child, then why don’t you send them instead?’”

Her anxiety caused by the threat that her baby would be taken from her resulted in difficulties in breastfeeding. When they went on hunger strike for their release, the soldiers cut off the electricity and water supply in their cell. However, the military eventually gave in after two hunger strikes in 1976 and released Enriquez and the two other women political detainees. 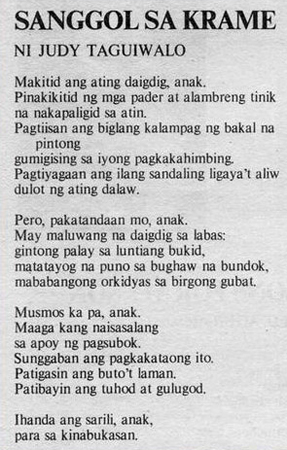 Taguiwalo’s experience was different. During that time, from 1984 to 1985, the support of international organizations, human rights groups and church organizations was overwhelming. “We all could feel that it was only a matter of time before we would be released,” she said. But like Enriquez, she was also stressed out. She was not able to breastfeed because she had no milk. Taguiwalo recovered with the help of her fellow political prisoners. They took turns in taking care of her baby so that she could sleep and eat. They also took turns washing her baby’s clothes. The late Crispin Beltran was among the fellow political prisoners who helped her a lot. Taguiwalo was released after the first people power uprising that installed the late Corazon Aquino as president in 1986.

Prison Not a Place for Mothers and Babies 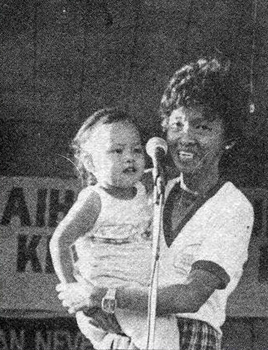 Taguiwalo’s daughter Inday June, now 26, said she was aware of her mother’s detention. “Mama told me of our experience during her detention, and how her fellow political detainees helped her when I was still a baby. By that I know that to have a baby and raise her in prison is difficult. The condition is just not right for children,” June, told Bulatlat.

Taguiwalo said a prison is not a place for nursing mothers and babies. Making it worse is the fact that women political prisoners, such as the two from the Morong 43, committed no criminal offenses.

Taguiwalo said President Benigno S. Aquino III should prioritize holding Gloria Macapagal-Arroyo accountable for her crimes and giving justice to the victims of human rights violations. “He should also order the immediate release of Oliveros and Castro and all the political prisoners. If he does the opposite, then he would not be faithful to the legacy of his mother.” (Bulatlat.com)