You Are Here: Home → 2010 → July → 31 → Advocates Worry That Aquino’s Mining, Environment Agenda Is Similar to Arroyo’s

“It is still early to say that President Aquino is anti-environment like his predecessor. However, based on what Mr. Aquino is doing and saying so far, prospects are not good for the communities and groups that have long clamored for fundamental change in terms of the national policies and programs that have caused much harm to our environment,” said Clemente Bautista of the Kalikasan People’s Network for the Environment (Kalikasan PNE).

Bautista said Aquino’s electoral platform, inaugural speech and State of the Nation Address (SONA) contain no clear environmental agenda and position on major issues such as mining, climate change and the garbage problem.

Aquino’s platform on the national economy includes attracting more investments in industries such as mining, opposite to what environmentalists and communities are calling for.

The Philippines is considered the fifth mineralized country in the world in terms of minerals per unit of area land. The country is also second to South Africa in gold production and third in copper. In Asia, the Philippines is fifth in nickel and sixth in chromite deposits and has the potential to be among the ten largest mining powers in the world. 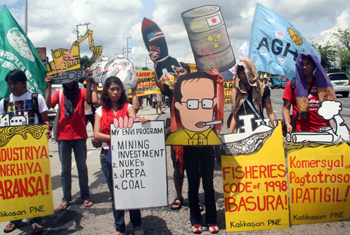 “Despite the growing mining opposition and the long standing call of different sectors to abolish the Mining Act of 1995, Mr. Aquino has been vocal on how he would encourage foreign mining investments and promote socially responsible mining in the country,” Bautista pointed out.

The group also slammed the appointment of Ramon Paje as Secretary of Department of Environment and Natural Resources (DENR), saying that Paje was one of the mining honchos of the Arroyo administration in promoting and implementing mining liberalization in the country.

Before being appointed as environment secretary Paje was the executive director of Minerals Development Council (MDC) and headed the facilitation of the selling and privatization of mineral facilities and lands in the country, one of which is the gold-rich Mt. Diwalwal in Compostela Valley, Davao del Norte.

Mining liberalization has caused the displacement of indigenous peoples, upland settlers, and communities dependent on the ecosystems of the concession area, resulted in the adverse environmental consequences, depletion of mineral resources, harmful impact on the people’s health and violations of civil and human rights such as killings and militarization.

Twenty-seven environmental activists were killed defending their land. One of them is Eliezer Billanes, the most outstanding Gawad ng Bayani ng Kalikasan awardee, who was killed on March 9, 2009, because of his staunch opposition against the Xstrata mining project in the Socsargen region.

Bautista added that the displacement of villagers, most of which are indigenous peoples and farmers, is a violation of human rights. He said that even at the level of contracts and agreements, farmers and indigenous peoples are already being dispossessed of their lands. “Even before residents are evicted, their legal claim to the land has already been superseded by the mining concession,” Bautista said in an interview with Bulatlat.

Mining projects also devastate the state of livelihood of the community. Bautista said that in Rapu-Rapu, Albay, the earnings of fisherfolk were radically reduced by 90 percent. Fish are scarce as only fish with high tolerance to toxic chemicals could survive.