The mass resignation of PAL pilots, the impending strike by the cabin crew union, the struggle of ground employees against mass termination and contractualization — all of these are interrelated. “It all stems from Lucio Tan’s moves to increase his profits even more by intensifying the exploitation of all his employees in the aviation industry.”

MANILA – The way Philippine Airlines management and some members of the press spin the story, many of the airline’s pilots were motivated by nothing else but money when they resigned en masse the past week to seek employment elsewhere, causing cancellation and disruption of domestic and foreign flights.

But what happened this week at the country’s flag carrier is just one of the results of the systematic degradation of working conditions there, beginning with the company’s decision to spin off certain crucial operations in order to cut costs and increase profit. This resulted in the firing of workers and the contractualization of those who remained.

For four days now, some regional and domestic flights of Philippine Airlines were canceled or disrupted as 27 pilots resigned so they could move to other airlines that offered them better job packages.

Although PAL management said on Tuesday that its flight operations were now back to normal, it is feared that more resignations might follow soon. Pilots interviewed by Bulatlat said the situation remains “very sensitive.”

Earlier, PAL management has threatened to file charges in court against the pilots who resigned, citing “breach of contract” and “debts” owed them for the cost of their aviation school training. Labor secretary Rosalinda Baldoz has echoed PAL management’s denial that the pilots’ mass resignation had nothing to do with the labor disputes in PAL. Baldoz has also suggested a longer notice, which is dubbed as a “slavery bond” in other countries, before pilots can leave PAL for overseas jobs. 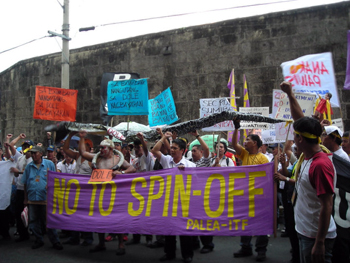 On Monday, airline management met with officials from government to discuss the problem. Worried at the veiled threats against pilots in the statements of the government — from President Aquino to his labor secretary — and at the PAL management’s explicit threats of filing charges, the progressive labor center Kilusang Mayo Uno (KMU or May First Movement) urged the Aquino government to push PAL management to address the causes of the labor dispute in the airline.

“We know it would be the pilots, not the PAL management, who would be hardest hit when government takes legal action,” Elmer Labog, KMU chairman, said in a statement. He asked the Aquino government to “side with the employees” and to view the mass resignation as an SOS not only by the pilots but by all PAL employees.

Today, PAL president Jaime Bautista announced in a press statement that the government “requested PAL to take back the resigned pilots without sanctions. We agreed.” But Bautista warned that “if the pilots will not heed our appeal to return to work within the specified period, the company will seek proper remedies.”

Bautista added: “There is no labor dispute as far as the pilots are concerned. Their main reason for leaving is purely on financial or economic reasons.”

Nothing, according to pilots and workers Bulatlat interviewed, could be farther from the truth.

The mass resignation of pilots that PAL is trying hard to control now is “not a labor dispute” in the eyes of the Department of Labor and Employment and PAL management only because PAL had broken up the pilots’ unions 12 years before. In 1998, as today, PAL was also complaining of losses. In 1998, PAL had profitably used “losses” to justify gaining more concessions and attacking its employees, recalled Anakpawis Rep. Rafael Mariano.

Since 1998, PAL has entered and exited a rehabilitation plan and paid off its loans but clearly at the expense of thousands of its employees, as can be seen in today’s simmering labor disputes between the management and the pilots, cabin crews and ground employees.

Per aviation industry standards, PAL pilots are given “lower salaries” than their counterparts in other airlines, according to pilots interviewed by Bulatlat but who requested anonymity, citing a gag order by management, among others.

But more than the salary, the resentment among the pilots and first officers is rooted in the way the company treated them. A co-pilot revealed that the mass resignation began with the forced resignation of 11 co-pilots who earlier refused to be transferred to Air Philippines, a budget airline also owned by business tycoon Lucio Tan.