MANILA — The consultation called by Anakpawis Rep. Rafael Mariano with union leaders of PALEA and FASAP last Tuesday turned into a preliminary meeting of the House Committee on Labor and Employment. Attended by 12 representatives (10 congressmen and 2 congresswomen including partylist representatives from Bayan Muna, Gabriela, Agham, Akbayan, Senior’s Citizen, and Congressmen JV Ejercito as well as the House committee on labor chairman Emilio Ong,) the consultation ended on a high note when Rep. Ong promised the gathered unionists, “We would convene very fast to ensure (PAL labor complaints) will be the priority.”

In their consultation with leaders of PALEA and Anakpawis chapter in PAL, the congressmen and congresswomen expressed amazement at the questionable drive to “spin-off” PAL departments that, based on employees’ job descriptions, appear as crucial in ensuring the safety of flights and comfort of passengers. Thus the departments up for spin-off are core departments, the unionists emphasized. The spin-off approved by DOLE last June was based on PAL’s allegations that the three concerned departments are “non-core.” 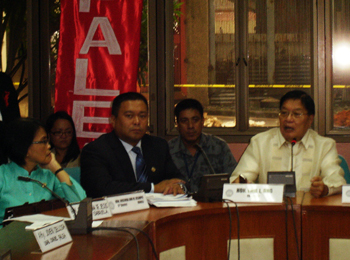 How could the airport services department be “non-core” when the quality and accountability of jobs here influence the safety of PAL flights? Gerry Rivera, PALEA president, told the gathered congressmen and congresswomen.

Rafael dela Cruz, chair of Anakpawis in PAL, said the spin-off is just contractualization and union-busting in disguise. Their termination via spin-off would only transfer them as contractual labor in third party companies that workers suspect of being dummies of Lucio Tan Group.

Jaime Bautista, PAL President, told the media in another occasion that the incorporators of the prospective third party service providers would be different from those in PAL, but the gathered leaders from PALEA and Anakpawis chapter apparently don’t buy this. Citing “experiences” and other precedents, they maintained that Lucio Tan is merely seeking to turn them into lower paid contractuals.

These allegations drew parallels, said Congressman Ronald Cosalan. He urged the House Labor Committee to look further into the issue of contractualization, as he cited the examples of mining companies in his province, and the SM chain of malls, where “all employees seem to be contractual.” He said this kind of trend is “dangerous.”

The PAL employees recounted that the first spinoff implemented in PAL in 1999, concerning the maintenance and engineering department, has a pending case in the Supreme Court. A worker has questioned the spin-off, and the Court of Appeals recently ruled that the spin-off was “illegal.”

“The reason why PAL is losing income is because its profitable services are being transferred to Lucio Tan Group’s Macro-Asia Corp., said PAL unionists. They brushed aside another PAL excuse, the cost of fuel, because PAL has “fuel hedging” in place.

“The Aquino government has openly sided with PAL management at first,” noted Rep. JV Ejercito. “But when they learned the problems go deeper, they shifted to a hands-off policy.”

This means PAL employees’ complaints are all being heard and “resolved” only by the labor department, whose efforts at finding a compromise between the employees and PAL management have failed this week. FASAP on Tuesday expressed disappointment that PAL still did not budge on the issue of discriminatory retirement of flight attendants. PALEA on Thursday expressed disappointment over the PAL management’s insistence on urging DOLE to reaffirm its earlier approval of PAL’s planned termination of nearly 3,000 employees. Although both unions said they will continue going through the processes required by the labor department, they also reiterated their intent to eventually go on a strike.
(Bulatlat.com)