MANILA — With the recent water shortage in Metro Manila, various organizations are urging the Aquino government to stop water privatization.

Water for the People Network (WPN) said the Philippine experience shows that privatization violates the right to water, and that water shortages are a direct result of privatization of water resources and utilities.

In his first State of the Nation Address (Sona), President Benigno S. Aquino III said his government plans to engage in more public-private partnerships to build more roads and bridges, build agricultural facilities and fund his plans for reforms in education, health and other social services. If the public-private partnerships of the Aquino government push through, that means privatization of basic social services and infrastructure development, the WPN said. Privatization would result in increasing rates in electricity, water and other basic services, the group added. 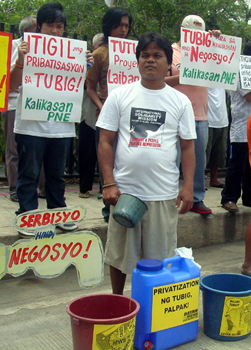 “People have already seen how the privatization of the water distribution company into Manila Water and Maynilad has not assured Metro Manila with a stable water supply. Since the MWSS’s privatization over a decade ago, the consumers are still facing perennial water problems,” Dr. Giovanni Tapang, chairperson of scientist group Agham, said in his article entitled “Lack of Water Amidst Plenty.”

On the other hand, Tapang said despite the continuing decrease in water levels, water supply to Metro Manila as a whole would not have reached crisis levels if only the concessionaires were prepared. He said that in July, Maynilad’s allocation of water from Angat had been cut by 30 percent which, according to reports, translates into a supply loss of about 720 million liters of water a day (MLD).

Tapang also added that supply-side system losses such as leakage in the valves and pipes that transmit from the dam to the filtration and distribution systems of the concessionaires should also be looked into so as not to aggravate the low water level in the Angat dam.

WPN also noted that 15 percent to almost 60 percent of water coming from Angat and Umiray dams is lost due to leakages. They also added that Maynilad alone is wasting 1,400 MLD for 13 years since it took over the west zone of the MWSS service area.

Tapang also pointed out that the use of the dam for power generation by Napocor is also one of the contributing factors to the steady lowering of the water level. “The use of water in the dam is also one of the concerns raised by groups in the privatization of the Angat Hydroelectric power plant (Angat HEPP).”