“I’ll keep mentioning this case to the President…It’s just a matter of time, you can expect some action,” Justice Secretary Leila de Lima said when asked about the Morong 43 case. “It’s the case I would want to focus on after the [IRRC],” De Lima said, referring to the Incident Report and Review Committee on the Aug. 23 hostage taking incident.

The 43 health workers, now known as the Morong 43, were arrested by combined elements of the police and military on Feb. 6 in Morong, Rizal. Slapped with illegal possession of firearms and explosives, the 43 were tagged as members of the New People’s Army.

Thirty-seven of them have been transferred to Camp Bagong Diwa since May 1 while five remained in military captivity in Camp Capinpin, Tanay, Rizal.

The International Association of Democratic Lawyers (IADL), the world’s oldest and biggest organization of human rights lawyers in the world with members in 90 countries, decided to take the case of the Morong 43 as one of its major international campaigns. The IADL is a non-government organization with consultative status to the Economic Social Council (ECOSOC) and United Nations Educational, Scientific and Cultural Organization (UNESCO). 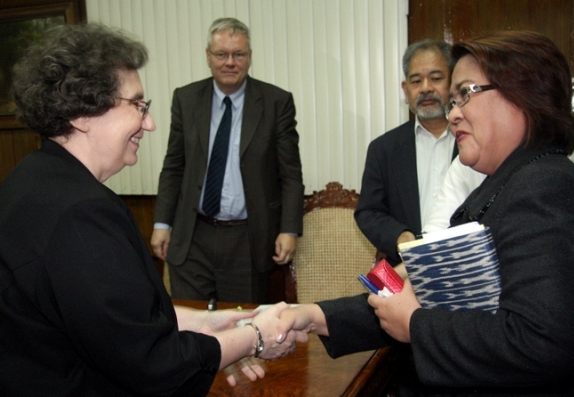 “We believe that based on the established facts and the credible and consistent reports, some universal legal precepts were violated in their arrest, search and continued detention. We wish to register our alarm over reports of their torture and inhuman treatment in the hands of the Philippine state forces,” the IADL said in a statement, referring to the Morong 43 case.

“We are very upset. The detention and the violations [committed against the Morong 43] are very disturbing to us,” Jeanne Mirer, IADL president, said.

“We understand your concern,” De Lima told the nine-member IADL delegation “We are reviewing the case,” she said. De Lima added that she was tasked by President Benigno S. Aquino III to review the Morong 43 case and submit recommendations.

“I know the violations. I know how defective the arrest was. I know that the warrant [of arrest] was patently defective on its face,” De Lima said.

The search warrant used for the Feb. 6 raid was issued against a certain Mario Condes who was not among the 43 arrested and who had never been found. During one of the hearings conducted by the CHR, police and military officers admitted they did not pursue searching for Condes. 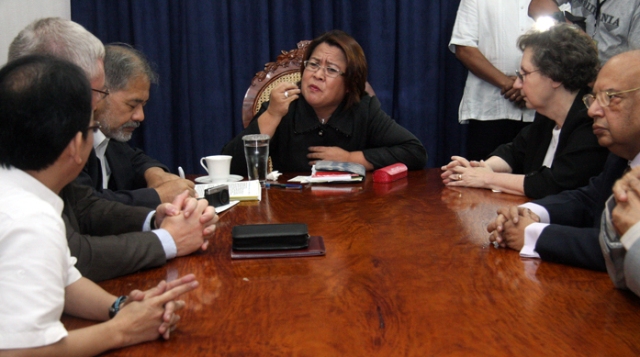 Justice Secretary Leila de Lima vows to review the Morong 43 case before a delegation of international group of human rights lawyers.(Photo by Raymund B. Villanueva / bulatlat.com)

“I’ll keep mentioning this case to the President…It’s just a matter of time, you can expect some action,” De Lima said. “It’s the case I would want to focus on after the [IRRC],” de Lima said, referring to the Incident Report and Review Committee on the Aug. 23 hostage taking incident.

After the Court of Appeals denied the petition for writ of habeas corpus filed by the lawyers of the Morong 43 on the basis of a martial law doctrine, they filed an appeal before the Supreme Court. The high court has not issued any notice since the appeal was filed in March.

Edre Olalia, one of the legal counsels of the Morong 43 and a bureau member of the IADL, told De Lima that they received reports that the case has been relegated to the division level. “Our position is that it should be heard en banc since there are issues of constitutionality,” Olalia said.

Meanwhile, the Morong Regional Trial Court is handling the criminal charges against the 43 health workers.

Vijander Jain, second vice president of the IADL, told De Lima that he has high hopes that the case of the Morong 43 would be acted upon. He said De Lima’s former stint at the CHR gives more credibility to the DOJ.

“It’s probably an advantage on my side that I came from the CHR,” De Lima replied, adding that she is aware of the expectations.

Jan Fermon, also a bureau member of the IADL, raised concerns over the non-distinction between combatants and civilians by the government and its security forces in the implementation of its counterinsurgency program. De Lima agreed that legal harassment was one of the strategies used before. She said she would block any endorsement of a similar policy.

IADL members are set to visit the Morong 43 detainees at Camp Bagong Diwa on Sept. 20. They are here in the country to attend the Fifth Conference of Lawyers in Asia Pacific (COLAP V) to be held on Sept. 18 to 19. (Bulatlat.com)