You Are Here: Home → 2010 → September → 26 → A Year After Ondoy, the Poor in Vulnerable Communities Still Struggling to Survive

A Year After Ondoy, the Poor in Vulnerable Communities Still Struggling to Survive

When the hype about relief and relocation efforts for victims of Ondoy, especially the poor in vulnerable communities, had died down, the urban poor were left to rebuild their houses and their lives, without any outside assistance. A year after, they are in a worse state than before Ondoy hit the country.

MANILA – From scraps of lumber taken from the nearby creek in Tatalon, Quezon City, Ofelia Lubat, 45, rebuilt their house after typhoon Ondoy (international name Ketsana) destroyed and washed it away last year.

Lubat just gave birth to her eighth child a week before Sept. 26, 2009 when Ondoy submerged Luzon leaving 5,353 families homeless with 200 or more people dead. “I thought we were going to die. There were only three of us in the house when floodwaters reached the second floor,” Lubat said.
Lubat is one of the thousand families who were left homeless when typhoon Ondoy wrought havoc last year. Her house was built from light materials and scrap wood and were thus, easily washed away by the strong flow of floodwaters during Ondoy. 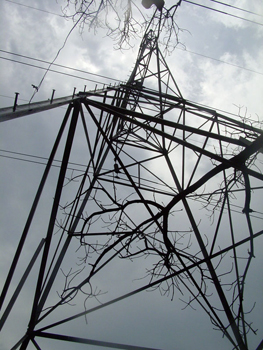 Lubat and some 50 families are still living in the danger zone in barangay 630 Kangkungan, Tatalon. It is situated where the Manila Electric Company tower is built.

One year has passed when the typhoon deluged Metro Manila. Families whose houses were washed away by floodwaters said their lives were never the same. They rebuilt their house, yes, but they are now in deep crisis and the trauma they experienced during the typhoon has not yet eased.

Ofelia Lubat, a resident of 630 Kangkungan, Tatalon, Quezon City, was relying on her sari-sari store to pay her debts. But when Ondoy washed away all her merchandise, she had to ask for another loan so she could rebuild her store. (Photo by Anne Marxze D. Umil / bulatlat.com)

Lubat has a mini sari-sari (variety) store before Ondoy inundated their place. She said, before Ondoy, they were able to cope somehow and that she was able to pay her debt to a loan shark through installment amounting to P20 ($.45) a day. “Supposedly my debt would be fully paid until Ondoy washed away all my merchandise. Now, I loaned again for my store’s capital and that dish cabinet,” said Lubat pointing to her new dish cabinet.

Lubat’s husband works as a school bus driver but his income could not feed nine mouths.

They lost their fourth son Marlon who died of leptospirosis in January this year. He was 17. Again, Lubat borrowed from a loan shark that she used for her son’s burial. 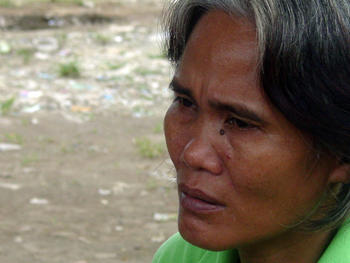 Nancy Abanedo, traumatized by the loss of their livelihood, is having second thoughts on putting up another sari-sari store for fear of another big flood. (Photo by Anne Marxze D. Umil / bulatlat.com)

Nancy Abanedo, 44, a resident of Juvillee, Brgy. Bagong Silangan in Quezon City had a sari-sari store and a videoke machine for rent, which she all lost after the typhoon.

“The flood water was really ascending fast. It was the first time we experienced a flood that high so all of our things and furniture sunk and were washed away. I also lost all the money that I saved. We were only able to save our lives and the clothes that we were wearing at that time,” Abanedo said in an interview. 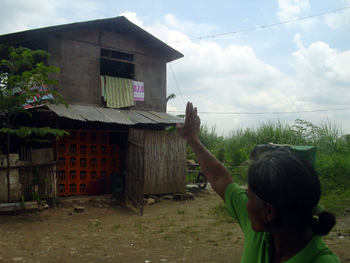 Nancy Abanedo, a sari-sari store owner and softdrinks dealer in Juvillee, Brgy. Bagong Silangan, Quezon City. All her merchandise were washed away by the flood, including a brand new videoke machine. (Photo by Anne Marxze D. Umil / bulatlat.com)

Now, she has no means of livelihood. His nephew Chris, 20, is the only member of the family who has a regular job. Her husband is a construction worker who often does not have a job.

She was traumatized by the lost of their store. She would have wanted to slowly set up a store again but is having second thoughts. “It is difficult to invest again. What if Ondoy would happen again?” Abanedo said.

Jaymee Tolentino, 24 of sitio Anahaw, barangay Ilaya in Alabang, Muntinlupa, just gave birth to her third child when Ondoy struck. Her house was smashed by the other houses that fell during the height of the typhoon. Fortunately, they were able to vacate their house before it was smashed down.

After the typhoon, Tolentino got sick but was not able to go to the doctor. Her two other children were also ill and her newborn had loose bowel movement. “I was also the only one who took care of everything while we were building this house. And because my husband’s job was affected when we were rebuilding this house, we had no means of livelihood.” Tolentino is jobless and his husband is a tricycle driver.

She said to be able to rebuild their house, they sold all their cellphones and loaned money from a loan shark with 20 percent interest. The local government of Muntinlupa also gave cash vouchers worth P7,000 ($159) to buy materials for their house’s reconstruction.

Both Tolentino and Lubat have stayed where they are.

Lubat who hails from Dumaguete did not avail of the Department of Social Welfare and Development’s (DSWD) Balik Probinsya program after typhoon Ondoy. The Balik Probinsya project was an option opened to the victims of Ondoy in Metro Manila. The DSWD provided transportation fare, food and other needs to those who would volunteer to go back to their home province.

“We would have nothing to eat if we go back to our province. I have had enough of eating corn and camote (sweet potato). Here in Manila, somehow we survive,” she said.

Tolentino, who lives in a coastal area in Laguna de Bay, did not avail of the offer to relocate to Katarungan village near the National Bilibid Prison (NBP) in Muntinlupa. “We have to ride a jeep going there because it’s a high place. There is no nearby market and school.There, we have no means of livelihood, transportation fare alone is very expensive,” said Tolentino.

Going back to her province is also not an option. “We are from Misamis Oriental, besides life is much too difficult in the province,” she said. (Bulatlat.com)