You Are Here: Home → 2010 → September → 26 → Memories of Ondoy, Government Neglect Push Residents to Prepare Themselves

Memories of Ondoy, Government Neglect Push Residents to Prepare Themselves

Imelda Bondocoy lost her house and her sister-in-law when typhoon Ondoy struck the country last year.

Fire and flood hit the urban poor community in Agno, Tatalon, Quezon City where Bondocoy lives. The Manila Electric Company did not immediately cut off the electricity despite calls from residents, thereby causing the fire. “We were starting to evacuate when a fire broke out at the back of our place. We experienced double disaster: fire and flood. And we thought that we would die either from the fire or the flood,” she said.

“When we were already out of our house swimming for survival, my sister-in-law Melanie was still with us. When somebody jumped into the water, Melanie drowned. Her husband tried to find her but failed. It was already 10 o’clock in the evening when we found her body 500 meters away from this house,” Bondocoy recounted. 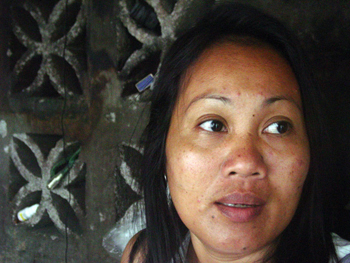 Imelda Bondocoy of Agno, Tatatlon, said they did not receive any help from their local government, not even a single cent. (Photo by Anne Marxze D. Umil / bulatlat.com)

She said they did not receive any help from the government. They shelled out money from their savings and some donations from relatives. They also did not receive relief goods since they were all in the funeral home when it was distributed. And because they did not have enough money to provide for her sister-in-law’s funeral, Melanie’s wake took two weeks. “We were busy soliciting funds for the burial,” Bondocoy said.

Despite the generous donations the Philippine government received for the victims of Ondoy and Pepeng last year, many urban poor residents said they did not receive any help from the government.

According to reports, private and international institutions gave billions of dollars in donations and humanitarian assistance for victims of typhoons Ondoy and Pepeng. The Department of Foreign Affairs said that among those who gave huge donations were the European Commission and European Union ( 23 million euros), bilateral partners (USD103.31 million), Philippine National Red Cross (P193,764, 010.79) and United Nations revised flash appeal (USD143.77 million). 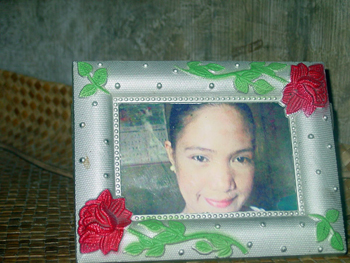 Melanie, Imelda Bondocoy’s sister-in-law, died of electrocution when flood water reached their house in Agno, Tatalon,Quezon City. During Ondoy, residents in Tatalon had to cope with fire and flooding. (Photo by Anne Marxze D. Umil / bulatlat.com)

The WB approved on November 17, 2009 an additional USD405 million loan to support the conditional cash transfers (CCT) program of the Arroyo government and for the strengthening of the DSWD as a social protection agency.

Tessie Dela Cruz, 49, also from Kitanlad Tatalon, said she did not also receive any help from the government.

“Cause-oriented groups like Gabriela were the ones who came here and gave us relief goods because many of the relief goods were going straight to the victims of fire,” Dela Cruz told Bulatlat.

Her son-in-law, Dalmacio Kuyakoy, 30 died of leptospirosis. Because they had to rebuild their house and give Kuyakoy a decent burial, they used up all of their meager savings and even acquired more debts. Dela Cruz sells food as a source of living.

“The barangay has banca or paddle boat, but during Ondoy it could not be used because it had holes,” Mylin Obias, president of Gabriela Tatalon chapter, said. Her house was also washed away by Ondoy.

Marietta Toledo of, 43, also a resident of Juvillee in Tatalon did not receive help either. Her house and all of their belongings were washed away by flood. She almost cried recalling the days when they thought they were all dying.

Toledo started all over again. “My husband is just a tricycle driver and I am a housewife. We have no other means of livelihood,” Toledo said.

Asked if they are ready for another Ondoy, the victims said they have started their preparations.

Jaymee Tolentino, 24, sitio Anahaw, barangay Ilaya in Alabang, Muntinlupa, has packed all their belongings. “So that when we have to evacuate we will just go to the evacuation center,” she said.

“We conducted a training here in Tatalon, the people in our community have the capacity to save a community. The problem is where would we get the materials that we need for a rescue,” Obias said.

The Philippine Disaster Risk Management, he said, should be fully implemented down to the barangay level. “Otherwise it will just be a cycle. The Philippines has topped the list of countries most frequently hit by natural disasters. CRED (Centre for Research on the Epidemiology of Disasters) also ranked the Philippines second to China in the top ten list of countries most affected by natural disasters in 2009. The government should have realized this fact and should not only act when disaster strikes.”

In July this year, the Department of Budget and Management (DBM) said 70 percent of the P2 billion ($45.45 million) calamity fund had already been depleted. The remaining 30 percent or P600 million ($13.64 million) is earmarked as quick reaction fund for relief operations of the social welfare and public works departments. Another P1 billion ($22.7 million) is needed to augment the calamity fund. (Bulatlat.com)