You Are Here: Home → 2010 → September → 27 → After TRO Stops Demolition, Aquino Orders a Stay to QCBD Implementation

“He has likewise instructed all authorities to exercise maximum tolerance and is confident that the issue will be resolved by the parties involved,” Executive secretary Paquito Ochoa said.

On Thursday morning, September 23, the police and the demolition team of the National Housing Authority (NHA) arrived early to demolish the homes of the residents in North Triangle, along EDSA and Agham Road.

There are about 9,000 urban poor dwellers who would be displaced from their homes because of the Quezon City Central Business District. The said project would supposedly put Quezon City at the forefront of foreign investments and business interest. One of the biggest investors is Ayala Land Inc., a real estate giant, that has agreed with the NHA that they would develop 29.1 of the total 256 hectare, at an estimated cost of P22 billion ($500,000,000 at an exchange rate of $44=P1). 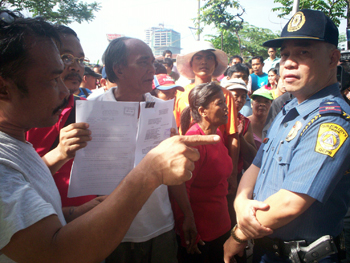 Around 6,000 families are still living in Sitio San Roque because they did not accept the government’s resettlement offer in Montalban, Rizal. They earlier criticized the relocation area, saying that a miserable life awaits the relocatees. (Watch video sidebar: North Triangle Resident Refuses Offer to Relocate, Criticizes Government Inaction)

Aside from having no source of income and the extra burden of having to pay higher transportation fare at the relocation site, the residents also worry about the fact that the resettlement area is located very near the Marikina fault line, which, according to Agham-Terminal Anakpawis chapter president Romel Gupo, might open up in five to ten years from now.

“Animals are much better off than we are especially by the way (the NHA) are treating us,” another resident shouted during the negotiations.

In an ABS-CBN report, Judge Maria Luisa Padilla of Quezon City Regional Trial Court branch 226 issued a temporary restraining order Thursday afternoon against the demolition. The TRO, however, came a little too late because the demolition team has already managed to demolish some of the shanties along EDSA. They reportedly had to demolish the houses within the first 30 meters from EDSA. This has resulted to a violent clash as residents defended their community. 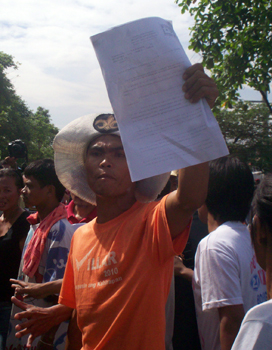 It was relatively more peaceful on the other side of the urban poor community facing Agham Road, which is parallel to EDSA. The tension, however, increased when a certain Narciso Francisco of the demolition team threatened the residents that if they would continue stopping the demolishing their homes, a big fire would occur in their community.

“Should there be a fire, no matter the cause, we would hold this person accountable,” Bobby Dicatanungan of the United Muslim Association said.

Carlito Badion, vice chair of Kadamay, said the demolition of their houses to give way to the QC-CBD reveals the priorities of President Benigno S. Aquino. “He is ready to sacrifice the entire 25,000 families in North Triangle to keep the Ayala, one of the developers of the project and a big contributor to his presidential bid, happy.”