As deforestation and rains continue to happen though, even as the metro’s drainage upgrade threatens to be late by 20 years while the mass housing program consistently shows backlogs, the CHD warned that more dengue outbreaks may occur before the year ends.

As of 18 September, Central Visayas has recorded 7,241 cases, Central Mindanao 6,470, Calabarzon 5,739, Eastern Visayas 5,543, and Davao Region 4,658. The National Capital Region recorded almost 5,000 as of Aug 14. Iloilo has declared a state of calamity in the province when the cases of dengue rose nearly four times from August to September this year.

In the face of it, and considering that the country has been suffering from dengue outbreaks since 12 years ago, the CHD said all the steps being taken by the government do not seem enough to stop it. Yet, with every year and dengue outbreak, the number of those afflicted appears to be increasing.

From about 50,000 recorded dengue cases in 1998, dengue has stricken ill more than 84,000 in just nine months of 2010. Sporadic research suggests that the viruses or the mosquitoes bearing it seem to be getting more resistant to anti-mosquito drives, while the outbreaks, which used to be seasonal, have now become a year-long pandemic nightmare.

Though records forecast a worsening health problem, the government, based on budget allocations and policy directions, does not seem inclined to study it thoroughly or institute changes in public health care to meet the problem head on. According to the CHD, of the P33.678-billion ($771 million) health budget for 2010 announced by President Aquino in his first SONA, P27.737 billion ($635 million) was allotted for the DOH, of which only P3.2-billion ($73.344 million) was earmarked for developing health facilities while P6.1-billion ($139.812 million) was allotted to medical tourism.

A big chunk of the 2010 national budget- some P340.8 billion ($7.81 billion)- was allotted for debt servicing. Another P76.3-billion ($1.748 billion), or more than twice the budget for health, was allotted for the defense department. All these suggest that the government is responding more to the needs of foreigners and the military rather than Filipinos and ordinary citizens, said the CHD. 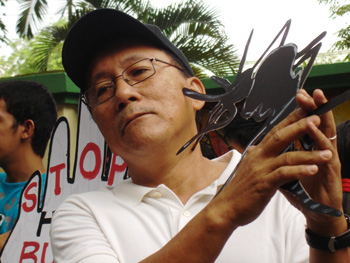 A health advocate during a rally for an increase to the health budget. (Photo by Marya Salamat / bulatlat.com)

This order of priorities was retained by the Aquino government which replaced Arroyo last June. “The 2011 budget gives priority to defense as the third highest, with 81 percent increase, and to debt payment (which is already almost a fourth of the entire national budget),” said Emma Manuel, president of Alliance of Health Workers (AHW).

More money are being spent for militarization while Filipinos are dying of diseases and hunger, said the CHD. For this health group, it is doubly ironic because last February, it has sensationally fallen victim to militarization.

Providing Health Service to the Poor is Not a Crime

In a health training spearheaded by CHD to develop “first responders” in remote, underserved areas, some 43 community health workers, including the trainers composed of two doctors, an operating room head nurse and a midwife, were arrested, tortured and accused by the military of either being communist sympathizers or armed guerrillas themselves. From February up to now, these health workers remain as political prisoners.

While health groups continue to urge the government to free their colleagues, in hopes of buttressing the first line of defense in health care through increased number of community health workers, the continued imprisonment of 43 health workers served to work against it, the CHD warned early this year. The health workers’ arrest and imprisonment instils fear among fellow health workers and professionals, who may now think twice before signing up for medical outreach programs and missions, Sr. Edith Eslopor of CHD warned.

Amid the lack of health workers and personnel who could have greatly helped in preventing disease outbreaks through education and timely first-aid in the people’s villages, health groups asked the Aquino government to truly attend to public health care – by giving it at least P90-billion ($2.062 billion) budget for 2011, by subsidizing health care “because health is a right and not a privilege of those who have money,” and by working to eradicate the causes of dengue and other preventable epidemics.

“Advising people to clean house, use mosquito repellants, wear long clothes when venturing out, even shunning perfumes and continuously using anti-mosquito products, are like treating only the symptoms, not the root causes, of dengue outbreaks,” said Dr. Nisperos. He adds that if these are the only things the government can do, then this government deserves condemnation. (Bulatlat.com)