You Are Here: Home → 2010 → October → 21 → Kin of Victims of Killings, Disappearances Hit Aquino Gov’t for Inaction on Rights Cases

MANILA – Ernan, second of the five children of Fernando Baldomero, was monitoring the radio that morning of July 5. Although he knew his father was a target of the military, hearing the news about his father being shot at by gunmen still shocked him.

Fernando, a municipal councilor of Lezo and provincial chairperson of Bayan Muna, was shot dead in front of his house in Estancia, Kalibo while preparing to bring his son Karl Philip to school.

“My father and brother were riding on a motorcycle when the gunman went near them and shot my father on his left shoulder, then on his chin,” Ernan told Bulatlat. He was pronounced dead on arrival at the hospital. Karl Philip, 12, was unhurt but traumatized.

Ernan said the military was behind the killing. “He has been receiving death threats. Officers of the 3rd ID [Infantry Division], in their radio program, have publicly labeled him as the leader of the ‘communist-terrorist movement’ in Aklan,” Ernan said.

Referring to the claim of President Benigno S. Aquino III in his first State of the Nation Address (SONA) that 50 percent of killings have been resolved, Ernan said, “Those are mere words. If he [Aquino] is really serious, he can order the DOJ[Department of Justice] to fast track the hearings on the case. Until now, after 102 days, the case is pending at the Prosecutor’s office and nobody has been arrested.” 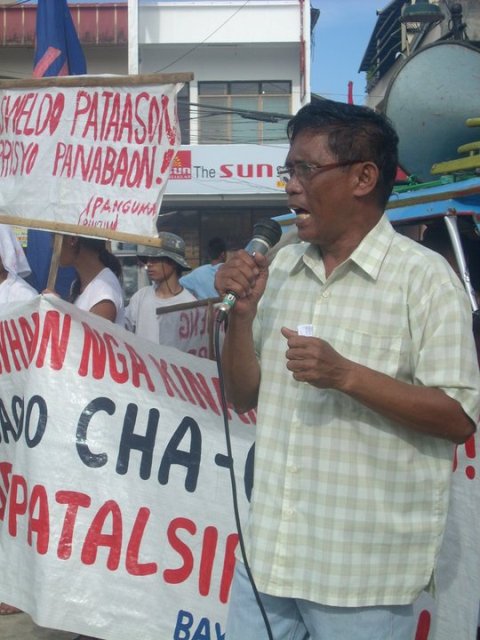 “Fifty percent solved? We will only consider it solved if the suspects are apprehended and jailed, and not according to the police’s parlance. That is not justice,” Ernan said. The Philippine National Police (PNP) considers a case solved when suspects have been identified.

Ernan said the murder was well-planned. For two weeks, their house in Aklan was being cased. His father knew he was under surveillance.

“I had hoped that my father’s case would be the first and the last case of extrajudicial killing but the culture of impunity is still here. There has been no effort from the President to stop the killings. His inaction has allowed the killings to go on,” Ernan said.

According to Karapatan, there are 16 victims of extrajudicial killings under the Aquino administration.

Ernan said Aquino never reprimanded the Armed Forces of the Philippines (AFP) whose members are implicated in the killings. 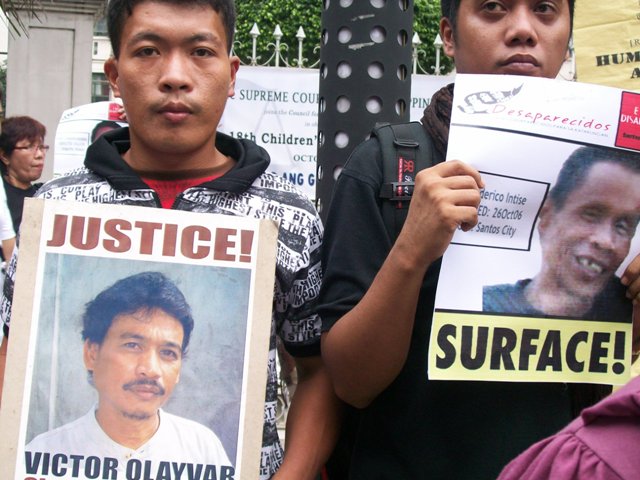 Geddion last saw his brother in their abaca farm in sitio Pinagdayonan, barangay Mahaba, Marihatag, Surigao del Sur on Aug. 28. Agustito told Geddion to go ahead to the evacuation center because he still had some abaca fibers to dry.

Residents of barangay Mahaba were forced to evacuate from their community when soldiers from the 36th Infantry Battalion of the Philippine Army (IBPA) conducted massive military operations.

Geddion, together with the relatives of another missing farmer Renato Deliguer, went searching for Agustito. They went to the PNP station in Tandag City; the police confirmed two men were turned over to them by the military but they were not allowed to see the said persons. They were told to go to the camp of 36th IB of the Philippine Army but the military denied having custody of the missing persons.

The local government helped facilitate a dialogue between the family and the military on Oct. 4 but the military did not show up, Geddion said.

The two farmers remain missing to this day.

“Aquino is no different. Our community is still heavily militarized,” Geddion said. “We challenge him to pull out the troops in our community. The soldiers are the ones creating chaos in our lives,” Geddion said.

Both Ernan and Geddion attended the first national assembly of Hustisya!, an organizations of relatives of victims of extrajudicial killings, held recently in Quezon City. The two vowed to continue struggling for justice for their loved ones. (Bulatlat.com)