‘Protest Center’ Marks Struggle of ABS-CBN Employees for Their Rights

Manila — The “protest center” put up by the terminated employees of giant media network ABS-CBN IJM across its headquarters in Quezon City last October 12 has entered its 10th day, surviving the rains of super-typhoon Juan and increased presence of company security guards across the street from time to time. An open-ended initiative of the IJM workers union, the protest center, they said, marks the union’s persistent demand for the reinstatement of the 114 “illegally terminated” workers and to put an end to grave harassments of workers by the company management.”

ABS-CBN has announced last month its “blockbuster profits” for the first half of the year, but it was tainted by an “ongoing process” of termination of employees who resisted the network’s “bogus regularization offers.” More recently, private researcher Nielsen also announced a downward trend in ABS-CBN’s ratings compared to its fierce rival.

From Disowned Kapamilya to Kapitbahay

Different batches from the 114 media employees terminated since June have been manning their union protest center in front of ABS-CBN, giving rise to a joke among them and sympathizers from among other workers and students that from being a kapamilya (a family member, the ABS-CBN’s advertising pitch), they have become kapitbahay (neighbour). 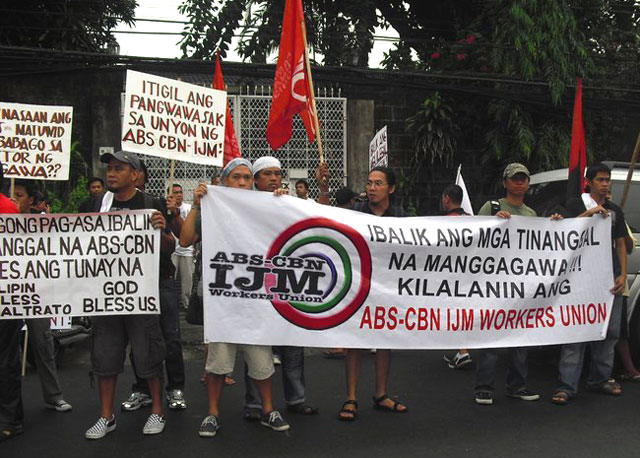 About a third now of the ABS-CBN IJM Workers Union members have been dismissed since June by Gabby Lopez, chairman of ABS-CBN, because they did not sign their names to the network’s various employment contracts. IJM or ABS-CBN’s Internal Job Market employees who have served the company for years, with some more than 20 years, are being forced since June to accept “regularization” contracts that would limit their tenure to less than three years, or for as long as their specific TV programs would last, the employees lamented.

Yet, since last month, the ABS-CBN has been told by the labor department that it is “prohibited from maintaining an in-house agency” like IJM, and that the IJM workers are regular employees because, as the country’s labor laws state, they are performing jobs that are “necessary and desirable” to the business of ABS-CBN, which is broadcasting and production of programs, and they have been with the company for at least one year.

Instead of immediately formalizing the regular employment status of the 1,000-plus IJM employees in the network, the company responded with contractual employment packages that forced the employees to waive their previous demands, including the demand to recognize their long years of service, the ABS-CBN IJM Workers Union said.

A month after the DOLE decision on the IJM workers of ABS-CBN, the waves of termination of employees resisting contractualization have continued in the company, prompting the labor center Kilusang Mayo Uno (KMU) to cite the Lopezes’ ABS-CBN as one of the prime examples of the Aquino government’s “pro-capitalist bias.”

Early last month, notwithstanding the DOLE decision recognizing the regular status of IJM employees, ABS-CBN terminated some of its sound engineers. The last to be terminated, so far, was the union vice-president Alain Cadag, who has worked as VTR man in ABS-CBN for eight years.

All the terminated employees did not receive a single peso of separation pay despite the long years they have worked for the network. Many have filed illegal termination cases against ABS CBN before the labor department.

Terminated For Not Waiving Years of Work History in ABS-CBN

Last Sept 6, Cadag said security guards simply refused him entry to the company premises, telling him he no longer has work schedules beginning that day. Unlike his co-workers, Cadag was not even offered a work contract.

Others before him were fired because they could not accept regularization offers that failed to take stock of their previous years of service. Nicomedes Canales, 35, audioman with ABS-CBN for 11 years, said that if he accepted the company’s “regularization offer,” it would appear that he was hired only this year. Rommel Matalang, 32, sound engineer in ABS-CBN for eight years, said the same thing. Work history matters to regular employees because, according to the country’s Labor Code, it is the basis for computing their wages, overtime pay, 13th month pay and eventually, retirement pay.

The union believes it is also unfair for the Lopez-led network to tie their tenure into specific programs. They explained that most of them at different times in the past years have worked or have been assigned to almost all of the broadcasting giants’ shows. “We have been to the entertainment, the game shows, the news programs,” the terminated employees manning the protest center told Bulatlat.

Forcible Waiving of Demands May Lead to Further Termination

Since June when Gabby Lopez began terminating IJM employees who would not accept their regularization offer, which is accompanied by a waiver, the union admitted that some employees had indeed been forced to swallow it. Unfortunately, Cadag said even those who had signed for the “bogus regularization may still face the threat of termination, as reports reach the protest center that these employees are currently being hustled by the management to repeat the signing of waivers by taking back their protest at the labor department’s NLRC.”

So far, the union said substantial discussions on their cases are being delayed at the labor department by ABS-CBN’s tack of repeatedly changing lawyers, and then citing as an excuse the new lawyers’ need to study the cases to justify their repeated requests for a postponement of the hearings.

Cadag admitted that because of the termination, some of the employees have grown afraid to join the union, even if “it is legal to form unions, and we have a right to do it.” The KMU in previous statements have challenged President Aquino to speak up about his position regarding the labor dispute at ABS-CBN, given that the Lopezes who own it are perceived as a close ally of the Cojuangco-Aquinos.

President Aquino has been maintaining a “hands-off policy” even in big labor disputes in the country, and even against clear violations of the Labor Code by big businesses. Worse, considering the already rampant violations of labor rights as being reported by employees and their unions even in huge, profitable firms such as ABS-CBN and Philippine Air Lines, the Aquino government announced last week its thrust of further relaxing the country’s labor laws.

In a Philippine Business Conference, the Department of Trade and Industry(DTI) secretary Gregory Domingo proposed to “relax” provisions in the Labor Code to make the country “competitive.” According to the Center for Trade Union and Human Rights (CTUHR), the proposal may lead to repealing sections pertaining to workers’ security of tenure.

“Aside from being a constitutional right, the security of tenure is one of the very few legal protection for workers inscribed in our laws. And despite this, companies continue to shamelessly violate these laws by enforcing various forms of flexibilization and contractualization schemes. The DTI’s proposal will allow investors to further exploit Filipino workers, all in the name of so-called trade competitiveness and economic development,” CTUHR executive director Daisy Arago said.

In a strongly worded statement, the labor center KMU condemned “the Aquino regime’s thrust of begging for foreign investments by offering a cheap and repressed work force with no security of tenure.” Elmer ‘Bong’ Labog, chair of KMU, asked all Filipino workers to unite and resist the drive of “the Aquino regime to continue to press down wages, implement repressive measures, and attack security of tenure in selling our workers to big capitalists.” (Bulatlat.com)