According to human rights group Karapatan, Rodriguez is the 21st victim of extrajudicial killing under the administration of President Benigno S. Aquino III. He is also the 13th peasant killed under the Aquino administration, the Kilusang Magbubukid ng Pilipinas (KMP) said.

“Aquino is turning the countryside into dark hell, pushing the military to kill and abuse peasants, with no respect for human rights and democracy. His promise of change is actually the worsening state of human rights in the countryside,” said Antonio Flores, Kilusang Magbubukid ng Pilipinas (KMP) spokesperson and Tanggol Magsasaka co-convener in a statement.

Based on the report of Karapatan-Batangas chapter, Rodriguez was shot at by two unidentified motorcycle riding men wearing masks on Nov. 7, around 8:00 a.m. at Brgy. Caybunga, Balayan, Batangas. He sustained three gunshot wounds on his head and chest, killing him instantly.

Rodriguez was one of the peasant farmers who continuously fought land grabbing in Coral, Batangas. 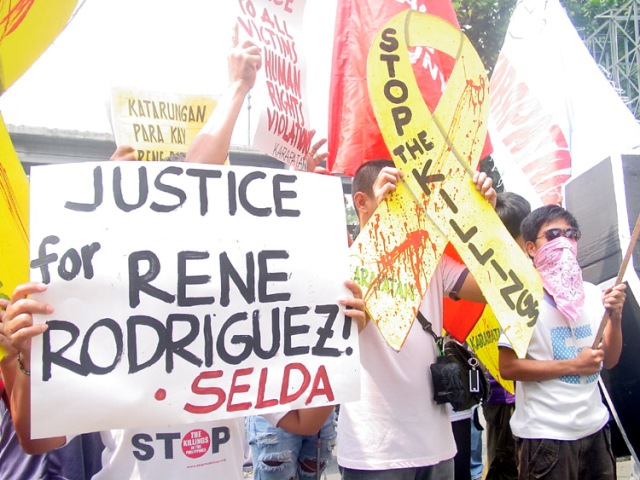 Members of human rights group and peasant organization denounce the killing of Rene Rodriguez in a rally outside the Camp Aguinaldo, Nov. 9. (Photo by Anne Marxze D. Umil / bulatlat.com)

“The Aquino government is totally useless in stopping extrajudicial killings of peasants. Worse, it has promoted Oplan Bantay Laya, militarization and human rights abuses in the countryside. Aquino is equally guilty as the perpetrators of these abuses,” said Flores.

“The latest killing belies the pretense put up by Aquino when he pledged before European Union representatives and the public that the killings would end. By continuing the US-dictated counter-insurgency operations with the extension of the bloody Oplan Bantay-Laya, the killings even worsened,” Roneo Clamor, acting secretary general of Karapatan said. He added that the killings and the US-supported counter-insurgency operations in the country must be stopped to defend the most fundamental right to life.

Flores added that Aquino is personally affected by peasant protests as he himself is involved with the Hacienda Luisita issue, and his family has been employing massive deception in an attempt to frustrate the farmworkers’ legitimate claim to the land. (Bulatlat.com)