By ED RAMPELL
Posted by Bulatlat.com

Writer/director John Sayles went to Hollywood Saturday night, but that’s not to say the über-indie filmmaker — creator of independent features such as 1979’s Return of the Secaucus Seven, 1984’s The Brother From Another Planet and 1996’s Lone Star — has “gone Hollywood.” Sayles held court at the historic Roosevelt Hotel then crossed the Hollywood Boulevard Walk of Fame (where, not surprisingly, there’s no star for the maverick moviemaker) to present the U.S. premiere of his new film Amigo at what may be La-La-Land’s grandest movie palace, the ornate, capacious Grauman’s Chinese Theater, famous for its courtyard of celebrity footprints immortalized in cement (minus, of course, Sayles’ stony imprint).

Sayles’ near epic was entirely shot on location in the Philippines with a largely Filipino crew and a mixed cast of Filipino and American actors. Amigo tells the story of a village caught in the crossfire between insurrectos – Filipino nationalists – and U.S. soldiers occupying those Western Pacific islands, as an outgrowth of 1898’s Spanish-American War. Instead of liberating the Philippines from colonialism, the latter day Yanqui conquistadors replaced Spain as the colonial ruler. Having already endured a third of a millennium of foreign occupation and rule, General Aguinaldo and his fellow revolutionaries did not take kindly to Washington’s meddling in their internal affairs, and Filipino guerrillas took up arms to resist the U.S. invaders. 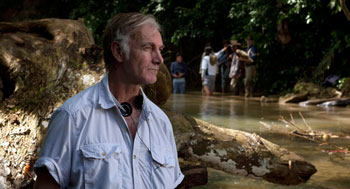 The Philippine-American War was arguably the U.S. empire’s longest war, lasting from 1899 all the way to 1913. (One could actually argue that although the Philippines attained formal independence in 1946, the U.S. occupation lasted until 1991, when the cataclysmic eruption of Mt. Pinatubo with post-Ferdinand Marcos nationalism combined to drive the Yanquis out of their Subic Bay Naval Station and Clark Air bases.) Leave it to the leftwing Sayles (whose company is called “Anarchists’ Convention Films”) to shine a light on this little known armed conflict, something that the helmer says he loves to do. And by turning to this violent episode of the past Sayles also scores some salient points about Washington’s two ongoing, seemingly endless occupations of Afghanistan and Iraq, which threaten to replace the Philippine-American imperial imbroglio as the U.S.’s longest lasting wars. As Chris Cooper’s hard-bitten colonel says, “There’s a lot of history you don’t know about.”

Cooper, a veteran Sayles-man, leads the American troupe as Col. Hardacre, a hard ass Civil War vet and officer in charge of the U.S. troops, who clashes with Garrett Dillahunt’s Lt. Compton, as he attempts to win the hearts and minds of the villagers he oversees. In an effort at what would be called “hamlet pacification” during another Yankee war of aggression – Vietnam — Compton introduces display democracy to the village he occupies. But when Hardacre returns there after a skirmish he water boards the hamlet’s re-elected headman, Rafael Dacanay (Joel Torre, a popular Pilipino performer who seems to have been named after Jose Rizal, and appeared in a 1998 biopic about that national hero). Another one of the top Filipino actors Sayles cast is Bembol Roco, who plays the insurrecto Policarpio, and whom moviegoers may remember as Kumar, Mel Gibson’s assistant in another classic about Asian upheavals (the bloody coup that toppled Pres. Sukarno), Australian director Peter Weir’s 1982 The Year of Living Dangerously, which was set in Indonesia but actually shot on location in the Philippines with a largely Filipino cast and extras. 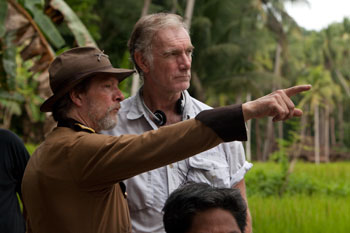 Rafael walks a taut tightrope as the village chief who must placate foreign invaders garrisoned in his village of Nipa huts and somehow co-exist with the guerrillas holed up in the jungle, and with whom he somewhat sympathizes. Rafael also contends with divided family loyalties. It’s a tough balancing act, as both the indigenous and the invading forces reportedly committed atrocities during the war (although American war crimes inspired Mark Twain, vice president of the Anti-Imperialist League, to pen a damning poem with a pen dipped in acid). The film’s references to water torture, solitary confinement and lynching are similarly harrowing.

Sayles often directs low key, laconically paced, character driven indies, such as the 1983 coming out drama Lianna, made long before porn’s Sappho chic trend or Ellen DeGeneres came out on her sitcom or MSNBC’s Rachel Maddow replaced Ellen as America’s favorite lesbian. Lone Star, which paired Cooper and Elizabeth Pena, is a racially charged murder mystery, but also a sensitive drama about brother-sister incest. Amigo, however, is most similar to Sayles’ action-packed 1987 Matewan, which was inspired by an actual episode of explosive class war pitting militant miners against owners and their henchmen. Amigo has the most gunplay and revolutionary politics of any Sayles film since Matewan, which also co-starred Cooper.