Experiences show PPPs did not guarantee savings for the government but even bloated the public debt. And it can only get worse under the Aquino government’s new schemes for more of PPPs.

Manila — Aside from further bloating the debt burden, Aquino’s PPP thrust will also facilitate increased corporate takeover of government roles and at the expense of public interest

On November 17-19, Malacañang will host a major event called “Infrastructure Philippines 2010” or what is referred to in the media as the public-private partnership (PPP) summit. This is an important summit for President Benigno “Noynoy” Aquino III, who has made PPP the centerpiece of his administration’s development plan.

According to its website, the summit “will examine investment opportunities, profiles of PPP projects in the Philippines, as well as policy, regulatory, and legal concerns in developing the infrastructure sector in the Philippines”.

Apologists of neoliberal globalization argue that while the corporations and banks will profit from PPP projects, they will in return finance and build much-needed infrastructure, which the cash-strapped government cannot afford. Aside from reaping the gains brought about by more infrastructures, the people will also supposedly benefit from improved government services since limited public resources will now be more focused on the provision of social services.

But are PPP projects, just like in any partnership, a mutually beneficial setup?

With a population of more than 94 million and growing, and a government that is facing a record fiscal deficit of Php325 billion by yearend, the Aquino administration claims that there is no viable way to meet the tremendous and increasing need for infrastructure in the country other than the PPP route.

Meanwhile, compared to its Southeast Asian neighbors that are spending on infrastructure an average of 5% of gross domestic product (GDP), the Philippines is only spending 3 percent.

The logic is that PPP will allow the government to save its scant resources because the private sector will shoulder the financial burden of building, maintaining, and operating costly infrastructure. In his first State of the Nation Address (SONA) last July, Aquino keenly plugged his PPP thrust declaring that through such partnerships, “we will meet our needs without spending, and we will also earn”. 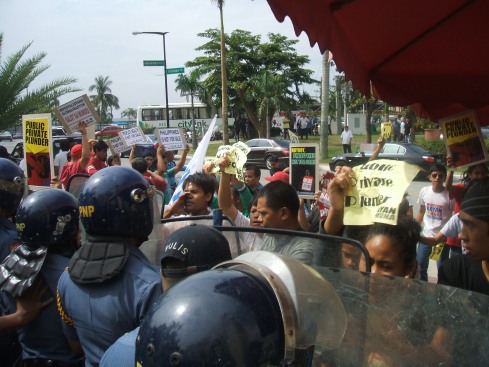 However, no capitalist will invest in big-ticket projects in a relatively small market like the Philippines without certain guarantees that will ensure the protection and profitability of his investment.

Consequently, PPP contracts are loaded with favorable terms for investors like guaranteed return on investment, guaranteed market and sales, fiscal incentives, full cost recovery including on inflation and currency fluctuation, and even unheard of sweeteners such as subsidies for production input (the fuel cost subsidy of Napocor’s independent power producers comes to mind) – all of which are borne by the people as consumers and as taxpayers.

This has been the case in past PPP efforts since the first Aquino administration, Noynoy’s late mother Pres. Cory, introduced the Build-Operate-Transfer (BOT) Law in 1990.

Not Manna From Heaven

But Aquino wants to outdo his predecessors including the Arroyo administration whose much-hyped “legacy” centers on supposed unprecedented achievements in infrastructure development. “I am very confident we will not only exceed (Arroyo’s achievements) but will beat it by a mile,” Finance Secretary Cesar Purisima boldy predicted.

How do Aquino and his economic managers plan to do that? Underneath all the talks about bureaucratic reform and fighting corruption to attract the best capitalists to invest in PPP, the harsh reality is that more investors will come only with more state guarantees and protection such as guaranteed investment return, access to loans backed by government guarantees, and in recent years, protection from risks arising from unfavorable court decisions that affect profitability.

PPP investments are “not manna from heaven”, as Purisima has recently admitted. Put more concretely, PPP will exact costs from the government and the people, contrary to Aquino’s earlier proclamation that we will not spend a single peso.

To make its PPP summit more saleable, the Aquino administration has designed a new scheme to protect the interest of investors. Aside from the traditional state guarantees on profits, etc. the government is also offering “pertinent incentives” to further stimulate private resources for PPP projects.

Aquino’s economic managers explain that such insurance could take the form of make-up payments from the government to PPP investors, other guaranteed payments, and adjustment to contract terms. The terms of protection will be included in the contract of each PPP project.

While the government assures us that the risk insurance will only be offered on a case-to-case basis, it is reasonable to expect every profit-seeking investor that will participate in PPP projects to ask for the said insurance.

But if the government is operating on a serious deficit, how can it fund the regulatory risk insurance? National Economic and Development Authority (NEDA) chief Cayetano Paderanga said that they will tap multilateral institutions to provide for the guarantees so that when PPP investors face risk, they can still “be paid fast and immediately”.

Ultimately, however, it will still be the taxpayers who will foot the bill of the risk insurance through debt payments – interest and principal – to the multilateral creditors. Likely sources include the Asian Development Bank (ADB) and the World Bank, two of the most aggressive lenders and active promoters of PPP projects. The latter has already indicated a willingness to provide funds for the PPP projects of the Aquino administration.

Thus, even if government claims that it is not providing notorious sovereign guarantees for PPP projects, the country may still end up more indebted than ever before.